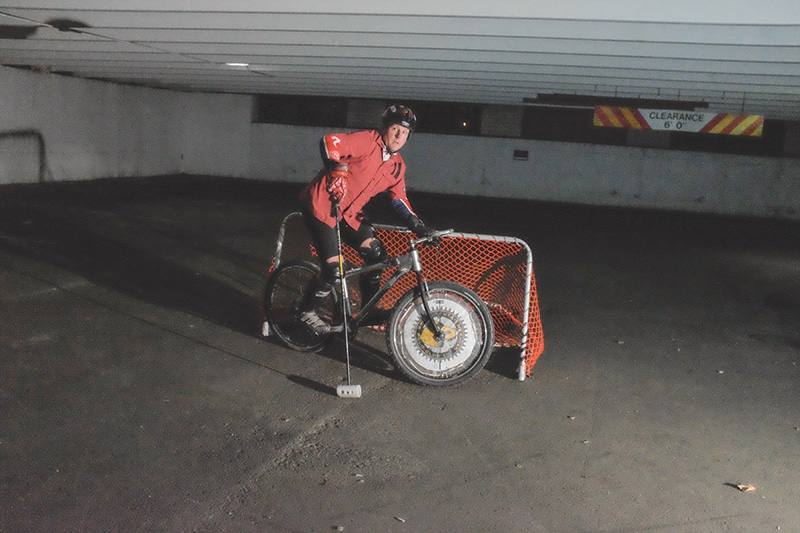 BBPC main organizer Chuck Heaton trackstands to play some “D” in the parking garage in Downtown Salt Lake. Photo: John Barkiple
Although I’m an adept enough commuter cyclist, I am a bit apprehensive as Beehive Bike Polo Club’s (BBPC) main organizer, Chuck Heaton, hands me his bike polo mallet to throw in to decide teams for my first (ad hoc) bike polo match. I’m in the winter home court for BBPC in the parking garage on 512 S. 400 E., and I’m hoisting a green loaner bike over the net that stops loose balls from bouncing out of the court. Before I know it, I’m doing my best to trackstand as one of my two teammates hollers, “Three, two, one, bike polo!” and we ride to hit the ball before the other team of three, each side vying to hit the ball into the other’s goal.
It was fun as hell—I even scored during my second game. I previously only had a vague concept of what bike polo is. Once I learned that Utah is home to two regular bike polo clubs, BBPC and Ogden Bike Polo Club (OBPC), I became enthralled by YouTube videos of the sport, with bicycle riders coursing across outdoor courts, whacking balls with mallets like how hockey players whack pucks with sticks.
Bike polo originated in the late 19th Century in Ireland, and is traditionally played on grass. The 1980s saw the sport’s revival where players transitioned from playing on grass to a “hard court”: tennis courts, street hockey courts or on any sort of hard, asphalt surface. Like traditional polo, the object of the game is to hit the ball into the opposing team’s net for a goal, which can only be done with the short end of the approximately six-inch head of a mallet at the end of about a three-foot shaft. To move the ball across the court, the wide end of the mallet head may be used, which is called shuffling. Three to five players can be on the court at a time, depending on the city and the polo club—BBPC and OBPC each include three players per team. There are different time/scoring formats—I played eight-minute games—which is something that Heaton determines depending on the number of players who show up every Tuesday night.
Heaton began playing bike polo when he was 17 at Hillcrest High in 1993. A couple of new members (whose names are hazy in hindsight) joined Hillcrest’s mountain biking club, of which Heaton was the president, and Heaton started playing grass bike polo as a fun alternative to training for mountain bike racing. Up until about 2008, Heaton and a few other Salt Lake bike polo veterans, Dan Smith, Mark Aletto and Stefano Foresti, had kept playing grass. After dwindling attendance at grass games, which require four to five people, “Stefano Foresti … said we should give [hard court] a try. I was kind of reluctant because I knew grass, and it was what I liked to play, and I kind of thought hard court was maybe a flash in the pan,” says Heaton. As it turned out, though, there were other people in Salt Lake already playing hard court. Heaton says, “We actually started to see an influx of people that had moved to Salt Lake from other areas that had been playing hard court, and so our numbers kept growing, hard court–wise.” BBPC officially formed in the fall of 2010.
The BBPC eventually found their winter home in the parking garage at 512 S. 400 E. and their summer home at the “polo/handball/tennis practice courts” at Liberty Park. Heaton has seen about 40 to 50 different people come and try bike polo, and there are about 17 regular players today. Aletto and Smith have kept at the sport, and compete just as fervently as the young bucks. One younger guy, Alex Kado, frequently travels from Minneapolis (a bike polo hub city) to play with BBPC, and just uses one of Heaton’s loaner bikes. Jeremy Josted was walking by the Liberty courts one evening as one polo player shouted, “Come play this!” As he asked, “What’s ‘this’?” the answer, surely enough, was bike polo, and he became yet another addition to the Tuesday-night crew.
Everybody who participates in BBPC has “the bike polo bug,” although Heaton is a solid cornerstone in the operation. Heaton had started making his own bike polo mallets back in the grass polo days, and initially made his first mallets out of a bamboo shaft. As his tenure through bike polo progressed, he began to craft his shafts from old ski poles, and started using ABS pipe for the mallet heads, before switching to HDPE plastic pipe. His latest model includes a mallet head made out of UHMWPE pipe, which resists the abrasion found in whacking a ball