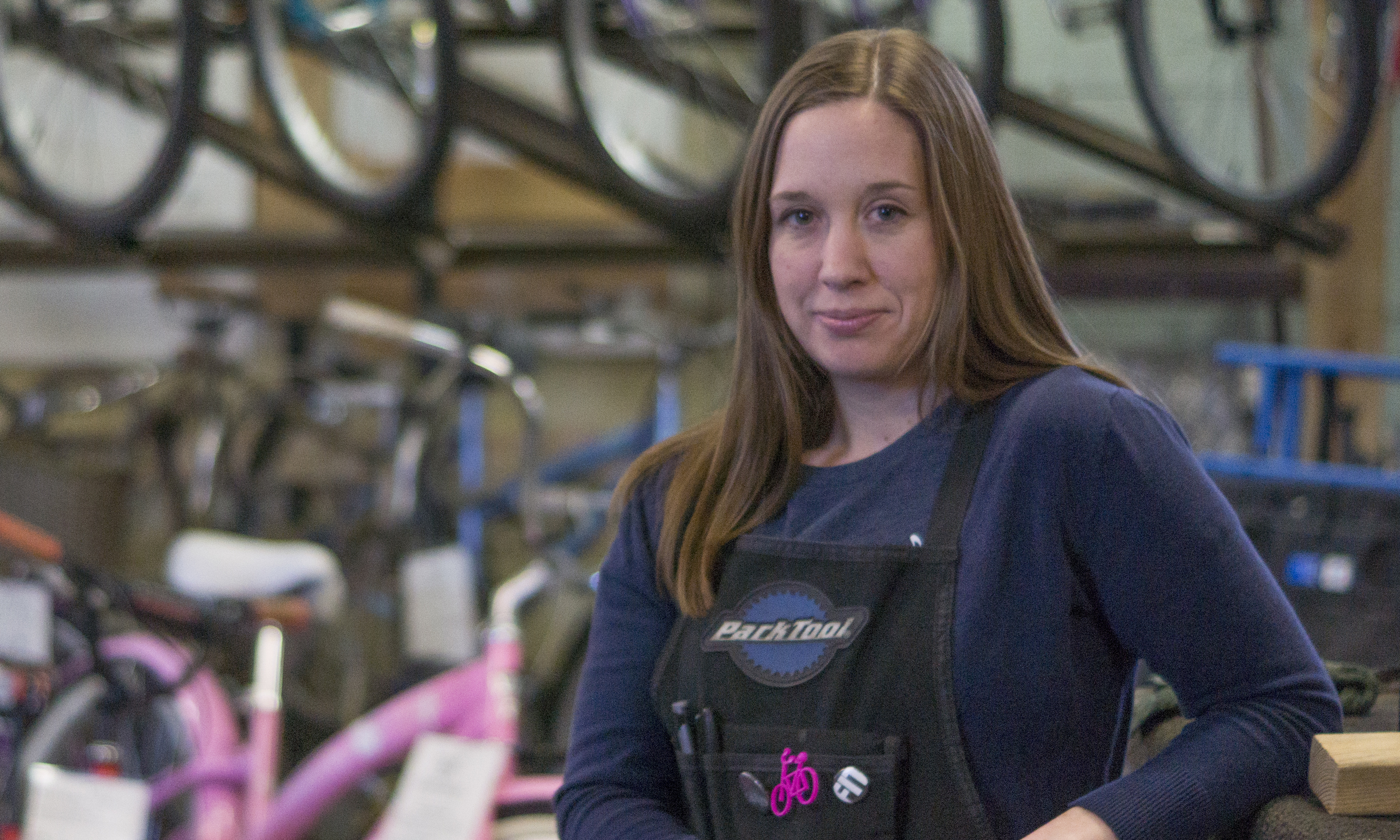 Since the OBC is a nonprofit that runs off of bike donations, they’re always looking for bikes that they can refurbish and sell—even the more worn-out bikes may have good parts to sell.
Photo: Chris Kiernan

The Ogden Bicycle Collective (OBC) has been a tour de force of good for the community of Ogden. They provide refurbished bicycles and parts at reasonable prices and often give away bikes via community-outreach programs. The OBC also offers classes in bicycle maintenance that are open to the community and are free, with donations welcome. Freshly at the head of the operation is Director Danielle Fry, who believes in a mission of giving the people of Ogden access to bicycles when other transportation options may not be as viable. “Ogden’s got some pretty low-income areas,” she says. “There’s a lot of people we work with who can’t even afford public transportation. If you can give them a bike and teach them how to maintain it, it’s a better way for them to maintain employment and whatever else they need.”

For Fry, necessity was also the reason that she initially got into biking as well. “I was in college, and I wanted to be able to get around cheaply, so I would ride my bike to work and to school,” she says, hinting that the exhilaration of being on a bike kept her interested in biking recreationally. “I enjoyed it—the physical activity was nice, especially when I had office jobs and I had to sit all the time.” As most people in the cycling community are already mostly aware of OBC’s existence, Fry makes it a point to try to reach out to the people in Ogden who do not own a bike or have not really been into biking before, specifically the people who can benefit the most from switching to a bike commute. “Our goal is to reach out to people who aren’t into biking,” she says.

In the same way that Fry aims to help people become self-sufficient through providing bicycles and the knowledge to maintain them, she also aims to keep the Ogden Bicycle Collective self-sufficient through the sales that they make in the shop and the donations that they acquire. Unlike their last location in downtown Ogden, OBC owns the building they currently operate in. “We’re a pretty self-sustaining nonprofit, so keeping that pattern going is something that’s really important to me, because then we can make decisions on what we do with the money,” she says. “We can develop programs based on Ogden’s needs and what we’re able to provide instead of having some federal entity tell us what we need to do.” Fry is most excited about the youth apprenticeships that OBC offers and keeping programs like this free for kids who are genuinely interested in attending, as well as being able to continue to provide children’s bikes for free to those who need them most.

Fry became director of the OBC in 2016 and is one of 16 women throughout the country who earned the Women’s Bike Mechanic scholarship through Quality Bicycle Productions, where she attended a two-week-long workshop at the United Bicycle Institute in Ashland, Oregon, on bike mechanics and operations. “I’m certified now, so it gave me a lot more knowledge on bike mechanics. Actually, seeing how they teach helped me become a better teacher,” she says, having originally gotten her start in bike mechanics through the classes offered at OBC. For her, the opportunity to get more formal training in bike mechanics gave her greater insight into the actual mechanisms and the reasons behind them, while also giving her an idea of how to approach teaching the subject to others more effectively. In addition to teaching at OBC, Fry is also passionate about teaching bike mechanics at youth detention centers in Ogden and Farmington. She hopes that some of her students there will be able to get jobs at bike shops when they are released. “I have kids that are super into it,” she says. “I’m excited. I think one guy who took the class last year got a job at a bike shop when he got out.”

Since the OBC is a nonprofit that runs off of bike donations, they’re always looking for bikes that they can refurbish and sell—even the more worn-out bikes may have good parts to sell. For the OBC, the community’s patronage is key in keeping the nonprofit self-sufficient, and any volunteer work is welcome, whether it is helping with the bikes or offering services such as event planning or photography. “If people want to get involved, they can volunteer, become members with us, and any time they buy something from us, it goes to help support our charitable programs,” says Fry. The OBC’s website, and the group’s Facebook page offer detailed calendars for those interested in volunteering as well as other upcoming events, including the annual Bike Swap on May 20, where anyone can sell their bike or parts on consignment for that day with the OBC.

Editor’s Note: The original version of this website listed the incorrect date for the Ogden Bicycle Collective’s Bike Swap. The changes have been amended.