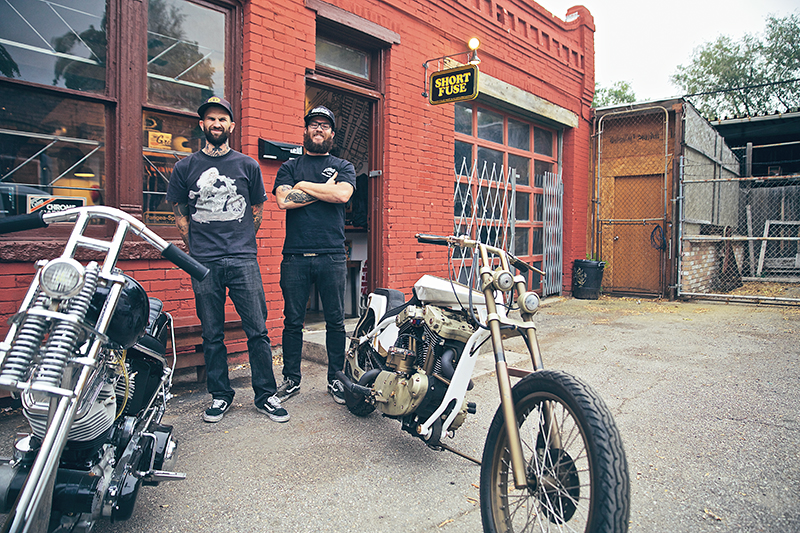 For Andy Carter, Brook Lund and Danny Payne, becoming custom motorcycle craftsmen and showing their amazing builds to the world was not where they would have envisioned themselves 10 years ago. Today, after years on the custom-bike-build scene, the trio are able to travel and showcase their bikes in elite custom shows around the world and in their newly opened custom parts and accessories shop, Short Fuse.

Short Fuse is the retail storefront to Carter’s custom business, Pangea Speed, offering custom parts ranging in difficulty from bolt-on bars to custom front-end fabrications, as well as a wealth of knowledge from true chopper aficionados. The store is operated by Carter, Payne and Lund, the latter being the owner of the downtown Este Pizzeria by day and a total gearhead at night. Though Payne travels a lot working for bands, he is the third gear in this motorcycle tri-force. Located across from Kilby Court, the buzz on the block adds to the heritage feel surrounding the shop. Kids waiting anxiously for a band to go onstage look like curiously hopeful moto enthusiasts wondering what awaits them in the depths of this small but welcoming brick building.

Carter began his career as a hot rod mechanic in California and—due to the inconvenience of a small garage space limiting the size of what he could work on—started tinkering with motorcycles. After moving back to Utah, Carter started blogging, taking inspiration from custom chopper-centric blogs like 4Q, Jockey Journal and Chop Cult, all the while honing his craft. He began to fabricate various parts, from seats to handlebars to entire front ends. Finally, after being fired from his day job, Carter—who is known as the mastermind behind Pangea Speed’s custom creations—says, “The Pangea thing kinda took off, so I said, ’Screw it. I’ll just try it full time until I run out of money.’” Carter is proud to say that Pangea Speed is now his day job. It is remarkable how passion is born out of necessity.

Short Fuse began as the name of Carter and Lund’s “crew”—referring to a trip to Mexico they took a few years back and the enormous firecrackers they exploded there. “[We thought] that would be a good name of a crew because it sounds intimidating, but it’s really just in reference to us being idiots,” Lund says of their crew of friends. Short Fuse later evolved into “[an] excuse to have a house for me to do the Pangea stuff,” Carter says, which he had been doing from his home after moving from his shop in North Salt Lake, where he did custom parts, full builds and custom fabrication jobs. “We had been talking about doing a retail store for a while,” Carter says. What sparked the need of a retail storefront was Carter’s desire to limit the amount of custom builds he was doing, stating his frustrations with some custom requests. Carter also admits to some of the tedium of the administrative duties of the custom business. “It’s hard to do the paperwork side of the job,” he says.

Weighing in on his previous opinions and misconceptions of Salt Lake’s moto scene, Lund says, “We have a running joke that if you didn’t take a picture of yourself riding your bike, did you actually ride it?” Lund admits that his “old, jaded” opinion doesn’t matter anymore because if people are stoked about riding, that’s great. “Our friend Danny is a lot more positive about the scene,” Lund says of their third wheel. Lund is just more stoked on the product knowledge he gains through research and hard work. Lund says, “I don’t see the pride in riding a motorcycle, but now I take a step back and I see that they are excited about it. I live to go to work and ride to lunch,” Lund says. His passion lies in his catalogue like knowledge of just about any part’s origin, and if he doesn’t already know, he will find out. This is where Short Fuse will make an impact on Utah’s motorcycle culture.

Inspiring, teaching and motivating people to do their own custom work is the mission behind Short Fuse. “We want to create an environment of non-intimidation,” Carter says. “Come down here and we can absolutely talk you through how you can build your own custom motorcycle. If it’s on a motorcycle, chances are, between the three of us, we’ve done it.”

Carter aims to always compound his knowledge and challenge his skill by traveling with his bikes from one end of the country to the other, whether it’s Born Free in California or Brooklyn Invitational in New York. This year, they will be traveling to Japan for the 25th annual Mooneyes Hot Rod and Custom Show that features world-class builds, which is the direction Carter wants to continue to go with his bikes. “Getting your bike invited to that within the chopper scene is the ultimate,” Carter says. “The best custom bikes in the world are invited.” It’s both humbling and motivating for Carter when he thinks his bike was the best in Salt Lake, but when he travels to shows, he realizes all of the rad stuff that’s out there.

Short Fuse aims to revive what they consider to be the true chopper culture buried in Salt Lake. What lies behind this seemingly quiet, little building is a wealth of knowledge about motorcycles waiting to be shared, to hopefully inspire the next generation of moto-enthusiasts. Stop by and chat the guys up at the shop or check out their website at pangeaspeed.bigcartel.com.