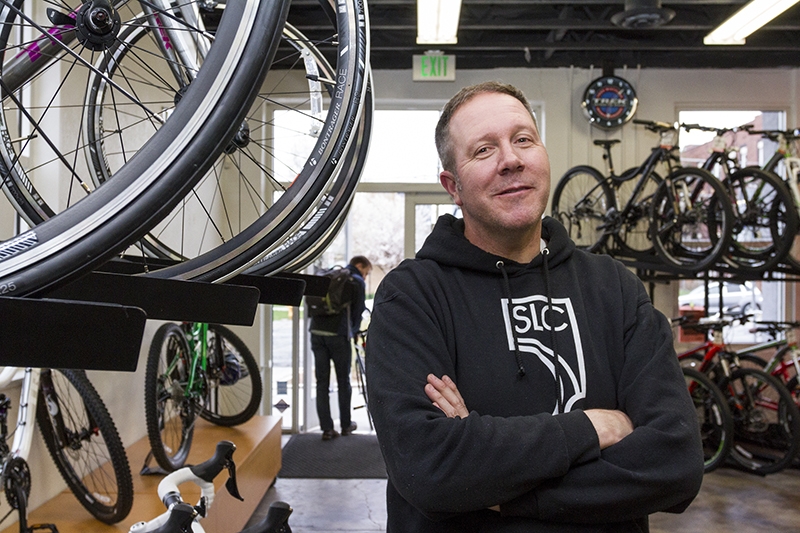 When it came time to move, Brent Hulme, owner of Salt Lake Bicycle Co., kept his bike shop in downtown SLC out of loyalty to his customers and employees.
Photo: Helen Leeson

In 2008, on the corner of 2nd and 2nd in Downtown Salt Lake, a beautiful bike shop opened up alongside the booming bicycle community with a definitive name: Salt Lake Bicycle Company. The shop was a little intimidating at first for a newbie cyclist like me, with fancy, expensive-looking road bikes hanging in the big windows and a sprawl of gear I knew nothing about, but its staff immediately jumped into the community to prove they were there to serve us little guys, too. My first time inside was during a Ladies Night, where I learned how to fix a flat without getting grease on my hands, met one of my best friends, and bought my very first racing saddle.

You may have noticed that the historic Second and Second building is no longer home to SLC Bicycle Co., but its heart and soul have simply moved a few blocks up! Their new location at 247 S. 500 E. (sharing their north wall with Urban Lounge) mimics all of the shop’s previous designs and aesthetic in a space that feels more integrated and accessible. “I’ve looked at probably 20 different buildings in Downtown Salt Lake,” says owner and founder Brent Hulme. “We found this place and it seemed more homey than we were used to, and it seemed like it would work out really well.” Hulme was determined to stay Downtown after the decision was made to move out of the building, though relocating to the ‘burbs would have been more economical. “I’ve always liked it Downtown: I like the urban feel—I like the urban environment. I think that Downtown Salt Lake City is one of the finest cities for riding bikes in the urban setting that I’ve seen anywhere,” he says. “A lot of it is that we’ve had great customers here that we want to continue to help and serve. They’ve been good to us, and we’d like to continue to support them and their riding. That’s really what it comes down to.”

Hulme’s dedication to this city and cycling is apparent in the fact that he commutes daily via train and bike from Provo—I’ve run into him myself a few times in the morning, riding up 200 South. He’s been working in the bicycle industry since he was a college kid in the ’80s, where his degree in Psychology was pushed aside for his passion for cycling. “The only other job I’ve had in my adult life was making bagels, and it was so I could save up money to buy another bike,” says Hulme. In 2008, he founded the shop after an opportunity presented itself to “change again and invent my own thing,” he says, and though the challenges of owning a business in the post-9/11 economy are great, Hulme finds the role worthwhile in itself. “It’s not about wealth—it’s not really about prestige: If you’re gonna do something, do it right, and that’s what’s been rewarding about this. Everything you see here has something to do with some effort that I’ve made,” he says. Of course, it’s his dedication and passion for the perfect machine that drives his business and work ethic, regardless of the long hours and little recognition. “One of the neatest things about the bike industry is that sometimes you see somebody’s life just completely change from a bike,” says Hulme. “There’s a bunch of different ways of riding a bike, but there’s very few things in the world that help so many problems. It’s such a great solution to so many things that plague our society right now. To me, that’s the best thing about bicycles.”

Hulme can count all of his passions on one hand, and art is one of them. May 16 marks Salt Lake Bicycle Co.’s sixth annual Bicycle Art Show, running alongside Gallery Stroll in celebration of National Bike Month. “It was a hare-brained idea I had before I even opened the store,” says Hulme, who saw the open space of the old location as a perfect venue for a pop-up gallery. He explains that SaltCycle founder Zed Bailey served as a catalyst for the first show, which has since been curated and organized by Hulme himself during the busy Bike Month.

The Bicycle Art Show, or Gallery Roll, as it has also been called, provides the bicycle community an outlet to showcase their artistic sides, and for the artistic community to showcase their bicycle sides. Alongside entries from local, amateur visual artists and photographers, highlights have included the large, bold bicycle oil paintings of Steve Smock, imaginative sculptures composed of bike parts by Joe Norman, charcoal drawings by Sarah Mannion and even masking tape murals by Chad Farnes—all in celebration of the bicycle. Those interested in submitting to this year’s Bicycle Art Show should contact the shop at Hulme’s email or phone number.

Salt Lake Bicycle Co. has supported this community in a big way over the years—Hulme has never turned me down for sponsorship of an alleycat race or group ride. Alongside the national brands, you will always see local products like Velo City Bags and Tüb, and not every business owner is willing to open up their space after hours to advance community and art. Head up to their new location on 247 S. 500 E. and give them some love in return, and don’t forget to include the Bicycle Art Show as a stop on your Gallery Stroll, May 16. More info at slcbike.com.