SLUG Mag Soundwaves
Episode #392 – Homephone
00:00 / 17:29
Spotify Stitcher
RSS Feed
Share
Link
Embed
Hailey Broussard has five kids, and, until 2008, taking care of them was her sole occupation. “I knew how to be Betty Crocker, and little else,” she says. She does not consider herself a cyclist, though she now spends every weekday leading mountain bike trips and wrenching on dummy bikes in a classroom of kids. As the youth director of the Salt Lake City Bicycle Collective, Broussard’s job revolves around bikes, but she and others at the Collective argue that the bicycle is part of a larger equation. It is a vehicle for getting around and a vehicle for building a connected and complex community.

SLC Bike Collective: It’s not about the Bike 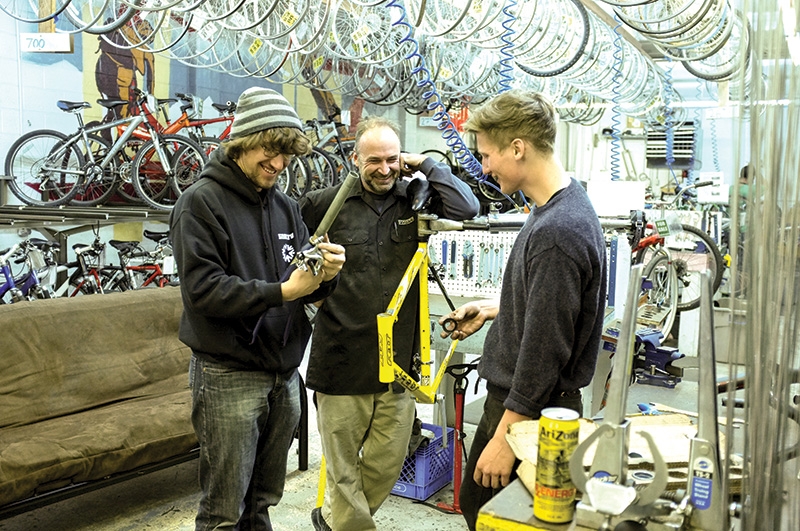 Hailey Broussard has five kids, and, until 2008, taking care of them was her sole occupation. “I knew how to be Betty Crocker, and little else,” she says. She does not consider herself a cyclist, though she now spends every weekday leading mountain bike trips and wrenching on dummy bikes in a classroom of kids. As the youth director of the Salt Lake City Bicycle Collective, Broussard’s job revolves around bikes, but she and others at the Collective argue that the bicycle is part of a larger equation. It is a vehicle for getting around and a vehicle for building a connected and complex community.

From a loose network of people using borrowed tools and looking to put more butts on bikes, the Bicycle Collective has expanded over the last 11 years into a multi-facility network that enables bicycling on a local, state and national level. The Collective believes in partnerships, which it uses to share knowledge and enhance its programming with elegant, non-monetized tie-ins: Clients of the International Rescue Committee can ride out on bikes donated by the Police Department, tuned by volunteers fulfilling community service hours. It has worked in a big way: The organization has put approximately 10,000 bikes into circulation, and satellite locations in Ogden and Provo have grown into autonomous entities. This summer, the Salt Lake location is expanding to accommodate a full-time classroom and larger office spaces alongside their sales floor and DIY workshop space.

During a bustling night at the Collective, from the moment customers queue up at the door with bike frames in hand, everybody’s welcome. “I love the diversity. I wear cowgirl boots and have big hair and wear lots of makeup, and have always felt at home,” Broussard says.  During the open shop nights, a dozen bike junkies will tinker on their passion projects, and another dozen people will ride off on a bike for the first time in perhaps 20 years. Some will come shopping for an inexpensive bike, others are referred by partner organizations and will receive bikes for free. For these people, bike maintenance might be intimidating, but knowing more solves a real problem of transport. Broussard can relate: Before coming to the Collective, she could not adjust anything on her bicycle. “Now, I think I could fix one from head to toe, any given day of the week,” she says.

Deb Henry, a Collective board member, sees a further benefit of their diverse clientele. The homeless, refugee immigrants and people without formal education are often marginalized. Coming by the Collective can give them a place to participate and find value, by problem-solving mechanical issues with other visitors in the workshop or by sharing experiences as commuters. “It doesn’t matter what kind of degree you have, or what your background is, or why you’re homeless, or anything like that. People can find a common ground in the Collective,” says Henry.

The open attitude extends beyond the shop. When faced with the challenges of establishing a bicycling non-profit in 2006, Collective Executive Director Jonathan Morrison realized that other organizations might have answers to his questions, or could at least learn from his mistakes. He spearheaded the formation of the Bicycle Collective Network, reaching out to the few dozen organizations that they were able to find. The network has ballooned to 400 members globally, who actively participate in spreading messages, resources, and best practices. Locally, this open communication has led to the Collective acting as a think tank for other advocacy organizations, and the location expansion in Salt Lake includes a plan to share office space with Bike Utah. “It’s important to create this air of clear and open communication between all the advocacy organizations,” says Morrison. “I hope people with ideas continue to come forward and share their ideas, and the Collective can continue to be an incubator for good things to come.”

The expanded space will strengthen existing programs, as well as allow room for new partnerships. Broussard is ecstatic about having a designated classroom for the kids’ classes, which are currently shoehorned into the open shop. “Basically, it’s going to be a 24-hour, kid-friendly place,” she says, hoping to regularly bring graduated youth volunteers back as co-instructors. Henry hopes the new space gives Collective customers a chance to come back and contribute what they’ve learned in pay-it-forward-style classes. Morrison hopes that the sustainable expansion of the Collective can inspire satellite shops, scaling as needed: “You just need room for tools and a stand. You don’t need much, which makes it beautiful,” he says.

As the organization grows, and cycling in Salt Lake becomes ever more popular through the combined effort of different groups, it is encouraging to think of the people who are empowered and connected by it, and the future potential for similar successes. Broussard is unequivocal about the effects of the place: She’s gone back to school, she’s lost a ton of weight, and she’s found a place to work and contribute. “I have a lot of passion for this place. It’s just done great things for my life,” she says.

The Salt Lake Bicycle Collective is located at 2312 S. West Temple. DIY shop nights are Tuesday and Thursday 5:30–9 p.m., Saturdays 12–7 p.m. Women’s Only shop night is the first and third Wednesday of every month, 5:30–9 p.m., and Park Tool School classes are taught Mondays from 5:30–8 p.m. For information on the 4–6 week Kids Earn-A-Bike Course, contact Hailey Broussard through the Collective’s website, bicyclecollective.org.

Editor’s Note: Davey Davis resides in NYC and is a former core volunteer at the Collective. He’s in the process of becoming more involved with them in the near future.