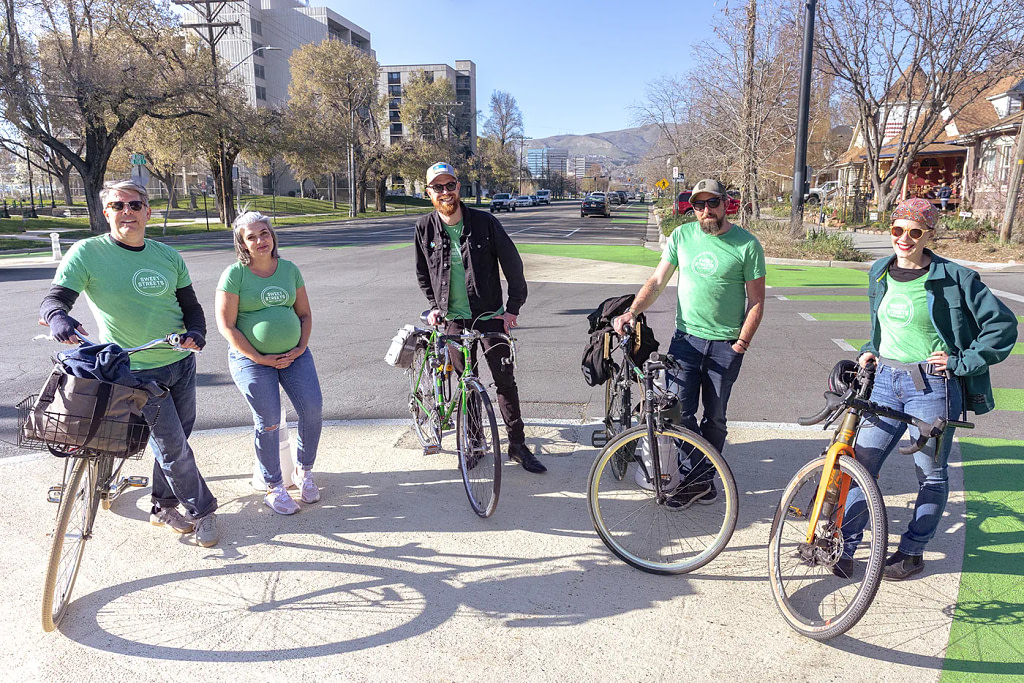 Every day, we interact with multiple means of conveyance around us, yet so infrequently do we consider how complex the culture and systems of movement really are. In late 2019, a few intrepid Salt Lake citizens built a “band” of roadside rebels to enact systemic changes in the ways we roam. This is the mission of Sweet Streets, a local people-first city planning advocacy group. I join founding member Taylor Andersen, alongside cohorts Johnnae Nardone, Benjamin Wood and Alex Cragun, to talk shop on the mobility-minded mission of the group.

“We realized we all care about what happens outside our front doors. Often people of color, low-income communities and people with disabilities are forgotten,” says Andersen. Unpacking the overdependence on single-operator motor vehicles is core to the Sweet Streets’ vision. “Mobility is a city issue; it makes everyone’s quality of life better,” says Nardone, herself a full-time member of the UTA staff. The trickle-down effects of better street design, accessibility and transit options affect more than most residents might imagine. Wood gets a streak of impassioned energy as he outlines the many tributaries affected: “If you want to decrease crime—better streets. Air quality? Better streets. Disability access … Everything starts on the streets!” He exclaims.

“Mobility is a city issue; it makes everyone’s quality of life better … ”

The organization has several policy irons in the fire, including the robust “20 Is Plenty” and “200 South Corridor’’ projects. Driving through both Rose Park and Liberty Wells, there are green-and-white lawn signs for the  “20 Is Plenty” project, currently the organization’s largest campaign. “We’ve been engaging the city in limiting neighborhood speed limits as those are the places wherein traffic violence happens. Adopting a 20 mph ordinance is both actionable and popular,” says Cragun in his academically hip tone. “There’s peer-reviewed evidence that 20 mph is effective, and it changes behavior. We need better design of our streets eventually, but this can happen now,” says Nardone. Sweet Streets is pushing for an eventual city-wide rollout of the 20 mph speed limit on certain local streets. Residents can sign a petition on the Sweet Streets website and request one of these charming signs, entreating automotive operators to slow down on residential roadways.

The “200 S. Corridor” project evolved as the city was resurfacing this major thoroughfare—one of Salt Lake’s famously wide streets. “It’s a once-in-a-lifetime chance to redesign an entire street,” says Wood. This redesign would allow for a 15-minute turnaround at all adjacent bus stops, rapidly improving the timeliness and reliability of public transit for downtown access. “A lot of cities have bus-only lanes. It’s time for us to have that, and no street is better. If the city thinks transit is important, we need one lane where it gets priority,” says Nardone.

The spirit of Sweet Streets feels large and even a bit overwhelming, yet the passion and dedication of its organizers is undeniable. “Everything you interact with when you leave your door is a policy choice,” says Andersen. Cragun chimes in with equivalent zeal: “A hundred years ago, Salt Lake was ‘the city’ when it came to public transit. Our trolley system had a seven-minute frequency across the city.”

“A hundred years ago, Salt Lake was ‘the city’ when it came to public transit. Our trolley system had a seven-minute frequency across the city.”

Salt Lake residents will spot the Sweet Streets team tabling at upcoming events, offering new volunteer opportunities slated to arise this year. In the meantime, folks can fill out their petitions, surveys and lists to add their voice to the project. In May, Sweet Streets will be holding a neighborhood walk during bike month to celebrate the addition of numerous new wayfinding signs the project produced via a grant from the AARP. “Keep your eyes out for irritating street design [and] toss up a flare to those issues. Be loud about what could happen,” says Wood. Join Sweet Streets in the effort toward a more movement-accessible Salt Lake at sweetstreetsslc.org.