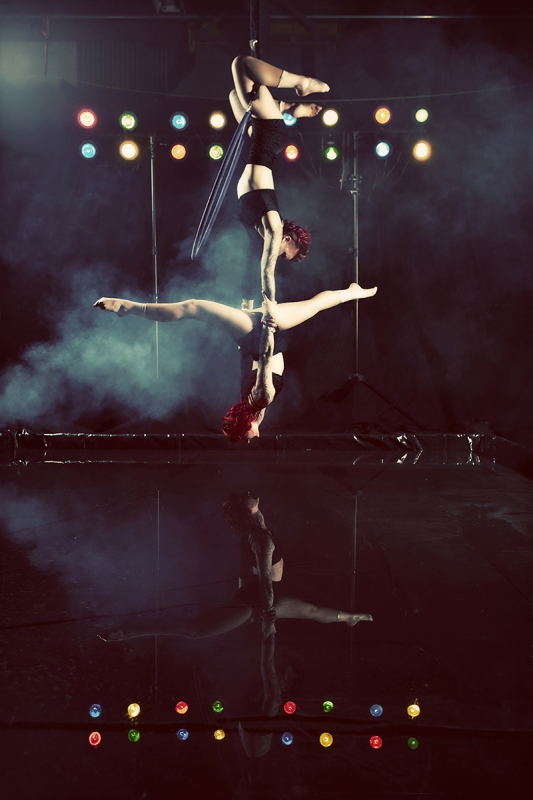 Photo courtesy of One World Productions.

Birds of a Feather: Avian Allure

Avian Allure is a Lyra (also known as an aerial hoop or a Cerceau) Duet performance group created by Andrea Hansen and Mandi Johnson. There is no denying the allure of these two beauties—they look like sisters, and they tell me that I’m not the first to think so. Flaming red hair and expressive features would make them compelling on any stage, and it works especially well for these two aerial performers, who put an emphasis on storytelling through movement in addition to their skillful contortions. Once appropriately costumed and dancing with each other on the suspended hoop high above the audience, this talented twosome uses their bodies and faces to tell the stories of the characters and themes that they take on for their performances.

Hansen and Johnson are lovely birds of a feather, and together, they’ve created a show that’s mesmerizing—not just because of the impressive physical feats, but also because of the gorgeous costuming and highly characterized performances. Each show is based around a theme or story, which guides the costuming, styling, moods and actions. “We do a lot of theatrics,” Hansen says. “We try to make it as theatrical as possible, and we incorporate dance and fire into it as well … We definitely try to make it more character-inspired than just flexibility and tricks.” The themes are inspired either by the event they are part of or the duo’s aesthetic interests. Sometimes stories are specific, like when they performed as Beetlejuice and Lydia; sometimes they are more of a reference, like to an era, like the Roaring Twenties.

Hansen, aka Pretty Macabre, is also a highly regarded local fashion and costume designer extraordinaire. Once characters and theme have been decided, she uses her mad skills and gets to work creating spectacular costumes to match the spectacle of their planned performance. “We like to dress up and become different people,” she says.

Setting the mood with sound is another critical part of any Avian Allure show, and Johnson ensures that it gets the attention it deserves. “I usually find the music,” she says. “It’s definitely a very challenging part of putting together the performances.” Moody or bouncy, the melodies help tie together the visual aspects of the show, giving the audience an all-encompassing experience. Recent performances have been influenced by vintage-meets-modern electro-swing styles, which make the perfect complement to some of the vintage flapper-style costuming Hansen/Pretty Macabre has created.

These talented ladies each have plenty of other interests and projects, including everything from belly dancing to yoga, but working together within this pairing has recently become a priority. “It’s more fun to do stuff as a duet,” Hansen says. Not that working as a pair necessarily makes it any easier. Johnson says, “It was interesting trying to get comfortable with each other. You’re so close … I think it’s brought us a lot closer … performing like that. You know, butts and faces. It was interesting at first. It was like a giggle fest … but we’ve definitely gotten a lot more comfortable with each other and make it work.”

After spending about a year and a half working on their act together, behind closed doors, they decided it was time to get it out into the world. “We just barely finally decided on naming ourselves and trying to promote ourselves as an actual duet,” Johnson says. Now they’re ready to take on the events and entertainment industry, and they’re available for everything from birthday parties to conventions—“any event, really,” Hansen says. One of their first shows as Avian Allure was at Comicon Fan X in April this year, a great gig for any performer.

Considering the logistics of safely suspending humans in the air, there are really only minimal requirements necessary to accommodate their show, including high ceilings and basic architecture. “We have all the gear, as long as they have a beam we can hook onto or something we can rig around,” Johnson says.

They’re already connected with other well-known and successful event and show production companies, like Voodoo Productions and FantasyCon, so their act likely has a bright future ahead. Luckily for us, they’re local, so get them for your event while you can! Who wouldn’t be impressed with these two pretty birds flying around, up above the shindig? A website is in the works, so for now, you can get ahold of them at facebook.com/avianallure.

If you can’t have them all to yourself, at least you can come enjoy their avian stylings at the Craft Lake City DIY Festival, where they will be performing a special new set for us. As far as teasers regarding the upcoming performance go, the duo is pretty tight-lipped. “It’s fancy—a little more tease … a flirty, flapper-y dance in the air,” says Hansen.

To see the show and find out what that means for yourself, get down to the 6th Annual Craft Lake City DIY Festival during the second weekend of this month. Avian Allure will grace the Graywhale Entertainment Stage with their Lyra duet performance on Saturday, Aug. 9 at 4 p.m.