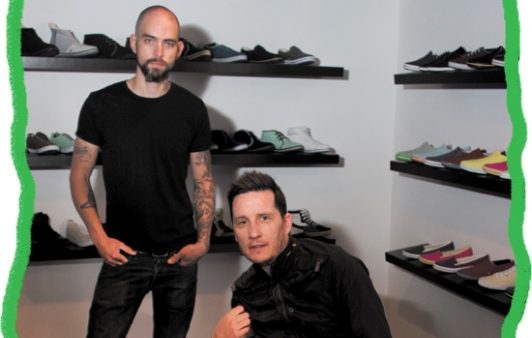 Black Boxes: Transmitting From the Bottom of the Sole with Zuriick

Tucked off of State Street on a side alley in between 600 and 700 South and hidden away behind an unlabeled metal door sit row upon row of brown cardboard boxes. Inside these boxes are even more boxes––black ones––en route to, among others, fastidious Japanese customers who demand their product be immaculately wrapped. Each of those black boxes harbor purple-bottomed kicks that the kids go gaga for. When they aren’t busy wrapping shoes to please their customers, the gentlemen behind local shoe company Zuriick are doing what they do best. “We basically hang out, drink a lot, and come up with designs,” says co-partner Chad Tovey.

The local shoe company, which has become renowned worldwide for their slip-on shoes with the easily identified purple sole, has been around for about four years. It’s hard to pin down an exact number because creators Clark Butterfield and Mike McCaleb were practicing shoe design a few years before that, but Zuriick as a brand and solid idea has been going strong since the official launch in November of 2007. The number of shoes being manufactured has steadily increased and so have the distribution locations. Zuriick still maintains a lot of growth in the boutiques where they’re found, like Bastille, but also in stores like Urban Outfitters. It would seem strange coming from a Salt Lake-based company, with the state being most recognized for the piss-poor liquor laws and dominant anti-fun religion. “A lot of people are surprised that we’re from Salt Lake. They don’t expect much to come out of Utah in general,” McCaleb says. “To me it’s a good place to be because you aren’t oversaturated with other clothing lines, the new stuff that everybody else is doing. It gives us that separation to give us our own vision,” McCaleb says. “I like doing it out of Salt Lake. I think its good for us.”

Staying away from the trends has also enabled the guys at Zuriick to give their unique and dedicated customers what they will truly wear––not just what is “hott” in Milan or New York, or wherever the fuck the shoe mavens reside. “We have an amazingly loyal fan and customer base. People will email us with how much they love our brand, or thinking that we designed a shoe for them,” Tovey says. “But probably the number one comment when people email us is: ‘Thank god you didn’t put any logos on our shoes.’ Our logo is our purple bottom.” Tovey believes, as do the rest of the Zuriick crew, that no identification is the best way. “We have professional people that try to say we’re missing the boat by not branding our shoe on the outside and it’s going to restrict us from building our brand. But in a way our brand is not having anything: that is our logo,” Tovey says. In addition to the color of their soles, Zuriick stands out because of the shoe design itself. “The first couple years all we did was the slip-on, and that is kind of what we’re known for mostly, but we’ve always wanted to expand into other styles,” McCaleb says. With more customers, now the brand is able to move outward in new directions. “Now we’ve finally grown into a place where we can expand and do the things we wanted to in the beginning and you can see us with our newer shoes the direction we’re going. We still have our basic slip-on, vulcanized sole. We’re doing new things but still trying to keep the look of Zuriick.” Tovey says, “We have a lot more options but still get to pretty much make shit we like. Mike designs stuff that we would wear or he would wear and likes, not something we think that people are going to like.” Tovey says, “I think you get in trouble when you start designing stuff you think people would want versus what stuff we would wear or our friends would wear.”

Tovey and McCaleb are relaxed and confident as they talk, but running a startup company in Utah––a fashionable company at that––isn’t always as easy as they make it appear.  Fortunately the guys get help from local designer Adam Contreras  (also a co-partner) and from Parker Tovey and Ryan Tomita. “Our whole company is six people big. Parker and Tomita are a lot of help and the big reason we keep everything going in here. We do a lot with a very small crew,” Chad Tovey says. The company is sure to grow larger, though, and with that sort of growth most would expect Zuriick to jump to a coast. “I think we’ll always keep it in Salt Lake,” McCaleb says. “I don’t think there’s a reason to move out. I think it could be detrimental to the company if we did move.” This kind of attitude bodes well for the future of Zuriick and represents a grounded attitude (even in the face of growing unit numbers and increased renown) that other business should take note of.