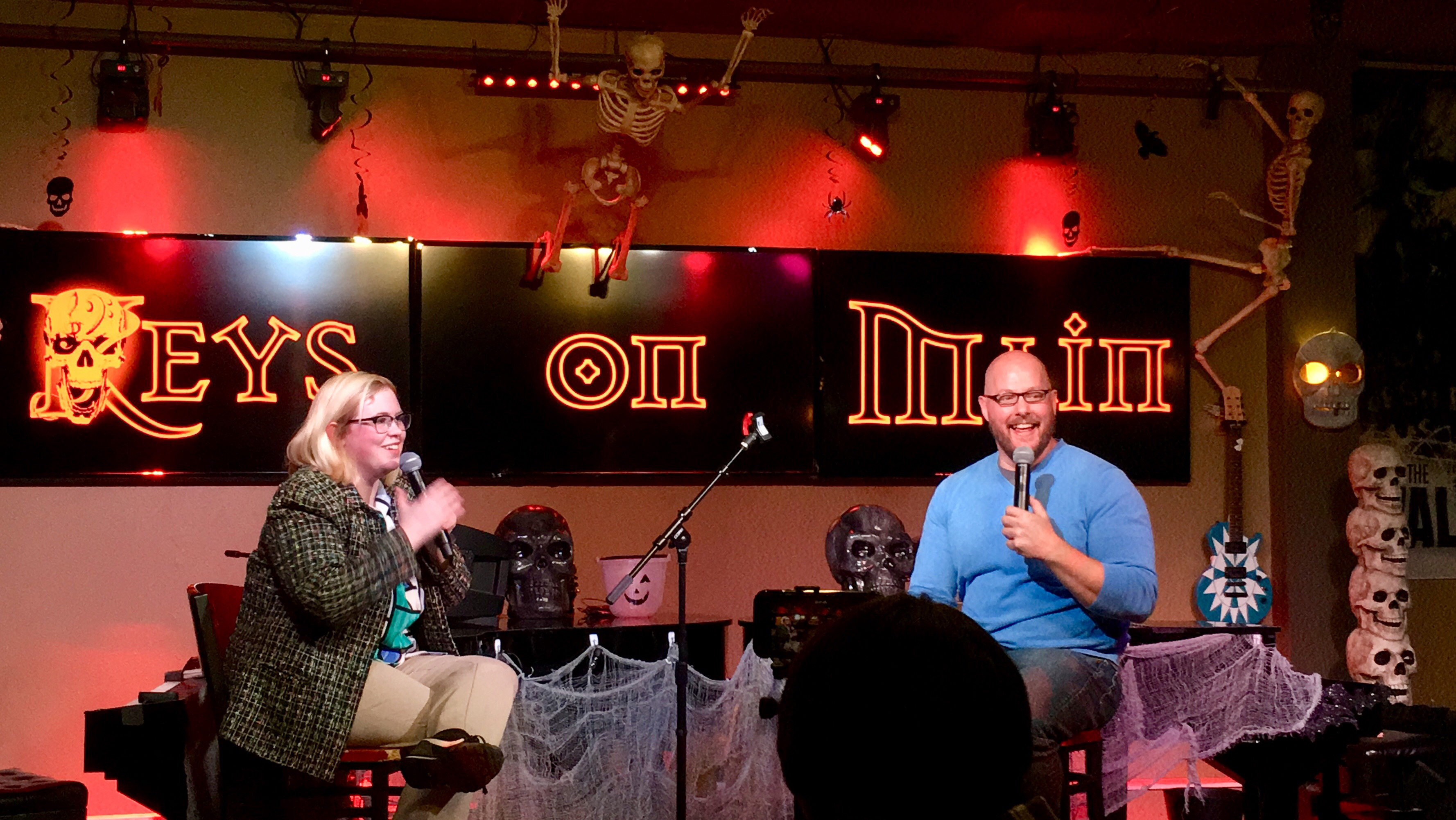 The Blessings of Greg Kyte and Comedy Church

Lord, give us this day our daily Greg—Greg Kyte, that is, and his one-of-a-kind Comedy Church. Recently Kyte, local comedy powerhouse, has become a breed of comedy pastor, priest, bishop and cult-leader wrapped into one with his new show running every other Sunday at Keys on Main. This Church service is for believers, doubters, non-believers and comedy fans alike, which ultimately makes it one of the most eclectic places to be anywhere in the valley on the sabbath.

Kyte comes from a “super hardcore evangelical” religious background and is a transplant into Utah Valley.  Starting out as a student at the University of Washington he transferred to BYU to be a “light of the true gospel unto the Mormons”—but makes it clear he “wasn’t a dick about it”. During his process of playing missionary to all of the return missionaries, at one point he realized “oh wait, we’re both wrong”. When he gave up Christianity thirteen years ago, he quickly transitioned into stand-up comedy. Though he was not missing the religion, he did realize he missed the close-knit community he was once a part of. “When I was a hardcore Evangelical Christian, I was really good at that. I was really good at church,” Kyte says “That was really my place to tap into a community.” After leaving religion behind him, the comedy community ended up being the closest he had gotten to filling the same position that going to church once held. Kyte now labels himself as a “doubting atheist”. Kyte says, “It’s like I’m pretty sure there is no God, but I’ve been wrong about so many things that I could be wrong about that, too.”

But what if there was a comedy show that was like a church service? Kyte says, “It was brewing in my brain for years and I just needed to have a deep enough existential crisis or dread to make it come about.” There aren’t too many dissimilarities between church and comedy, if you really think about it. There’s less singing, not that he hasn’t ruled it out. “My ulterior motive is to build this community,” Kyte says. “A comedy show is what we’re putting on, but my bigger vision is that it would also kind of end up being like a church where people who are like me, who used to be religious and who miss the camaraderie of a place like this, that you go to once a week that you felt like you belong.”  He envisioned a comedy show that, at the same time, could be a good excuse to become a place for people to congregate and belong. The added benefit is that people can come back every week that he does the show, as if their mortal souls depend on it.

During the “service”, Kyte is the host and emcee. Each service brings on a a different guest comedian and featured comedian. “The focus of the show,” he says, “is definitely for comedians to do their material on religion or religion adjacent material.” As he explains it, religion is supposed to be an all encompassing thing that guides all of your choices in life—it’s not that hard to tie it all back to religion, somehow. “Ethics, meaning of life, even relationships, it can all tie back to religion,” Kyte says. After the comedic sets, Kyte then interviews the comedians about what their experience was in religion. If they weren’t religious what would that be like? If they were, what has that transition been like? And, if they still are religious how does that impact their stand-up and where are their doubts? Kyte was surprised with the initial feedback from the show. “People really liked the interview part,” he says. Kyte essentially  just wants to know the answers to the questions and just have a real conversation about it. He muses that he has always been fascinated with the whole journey of it all. Past featured comedians have included local greats like Aaron Woodall from The Mormon and the Meth Head Podcast, and Abi Harrison from The Bob & Tom Show, Comedy Juice.

As Kyte explains, the audience member that the show is designed for is for someone like him: A person who used to be religious but isn’t so much anymore. “That’s what I’m still struggling with even though it’s been thirteen years since I got out,” Kyte says. He realizes that comedy and religious faith aren’t typically friends, but “so much of comedy is that you’re analyzing stuff for bullshit,” which he theorizes as to why many comedians claim to be unaffiliated with religion. But, no matter where someone is in their journey and beliefs, he aims to create a communal, welcoming place for all. “We’ve had two members of the LGBTQ community do sets at comedy church, everyone just goes ‘that makes sense here,’” he says. He’s had audience members range from atheists to his former Bishop’s wife. “I’m not there to convince anybody they are wrong or anything like that, I want to be able to have the freedom to tell people why I do or don’t believe the things that I believe, and I want the other people who are there to have that same freedom,” Kyte says. The two groups of people that he doesn’t think would feel necessarily comfortable are either hardcore religious people or militant atheists. However, he states he is not trying at all to offend but to open up people who are not at either of the extremes to different experiences. Kyte is interested in the sharing of stories or as he says “a guided testimony of non-belief.” “It’s nice to hear from other people who reflect my story” Kyte says.

As with any great themed comedy show, he says that there are some gimmicky things that they will do—like the “church bulletin” designed show program with information on the comedians and upcoming shows. He also throws in a convocation at the beginning where he reads a verse from a holy book, which he says will always be “something outlandish and a little bit nutballs—straight from scripture with very little commentary.” His Comedy Church communion will end all services with a toast in which a mystery Latin phrase is recited, then he will let the audience know the likely humorous translation. “Participation helps build the sense of community,” Kyte says. Every service will also contain a “message”. Sometimes there are themes, such as a testimony meeting (open mic), funeral of the living (a roast) and a book club where they will read through Fight Club and do a comedic discussion about the existential novel. “Church is kind of the Bible book club, when you think about it,” he adds. Kyte has paid special attention and really has put thought into having fun without making the service blasphemous to people who still participate in church culture. He says it is “not for the sensitive, but not insensitive.” He tries to avoid anything that would have been ‘too far’ for him when he was very religious. “I don’t want it to be like church just for comedians, but want people to come that like comedy,” says Kyte.

Keys on Main has been accommodating to open up just for Comedy Church, where those coming to ‘worship’ will not have to deal with any other distractions so typical for other ‘bar shows’. The services are just an hour long—7:30 P.M.–8:30 P.M. Afterwards Keys on Main generously stays open for everyone to spend time together, continue talking and drinking. They also offer a special Comedy Church shot for $4.00 or less, to help with that communion toast. The cover is an affordable $3.00 which, for the average person, is less than tithing and for everyone else is an unbeatable price for Sunday night entertainment.