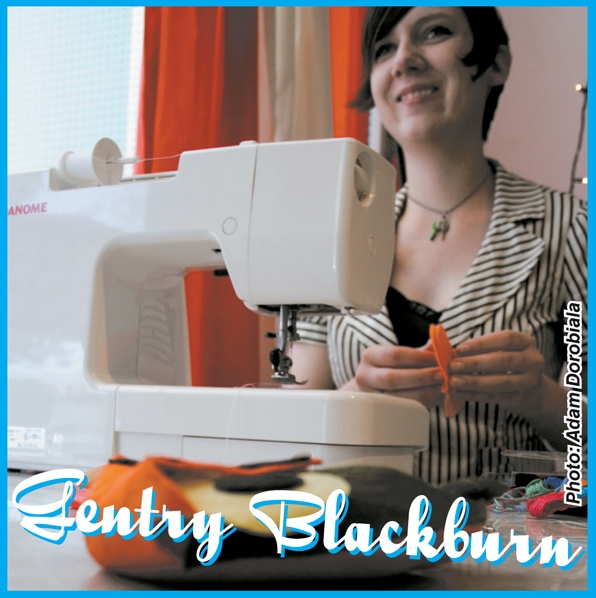 Painting, crafting and running your own store: most people only have the energy to do one or two out of these three at best, but Gentry Blackburn does it all.  While her gifts and crafts boutique, Frosty Darling, has only been around since March 2007, it’s already a well-loved staple downtown as well as a regular participant in the gallery stroll.  Blackburn graduated from the University of Utah with a BFA in Art in 2003, and her artwork has been shown regularly at various galleries in Salt Lake City ever since.  Some of her shows have included her “Frosty Darling” show (inspiring the name for her store) at the Library Square Gallery in 2003, her “ABCs” exhibit at the Saans downtown gallery in 2008, and most recently her “1982: Let’s Start Here” show at the Garfo Gallery in 2009.

Everything Blackburn makes is immediately recognizable as her own.  Her style evokes a sense of playfulness and nostalgia, recalling pop art from the 40s and 50s.  She says she aims for  “that State Fair, wholesome apple-pie” aesthetic (in fact, she regularly submits to the Utah State Fair, and has won the blue ribbon for a plush pig sty play set).  Her paintings recall the 50s and 60s, with iconic depictions of classic Old West cowboys, 50s housewives and plenty of animals.  She almost always utilizes bright colors and a carnival-esque, rendered style.  The results are quirky and sometimes a bit kitschy—but exactly the right kind of kitschy, the kind that makes you feel like a kid again.  Not content to stick to plain and simple painting on canvas, she also paints the occasional suitcase or handbag, and branches out from traditional frames. The walls of her store are lined with paintings that utilize vintage blue bowls as frames.

Making her own art and running a business present plenty of challenges for Blackburn.  “After being [at Frosty Darling] all day, I’m exhausted and I don’t want to paint at home.  So then I paint here, but I hate painting in front of people.  It’s quaint and I think it sort of adds to the store, but at the same time I just hate people looking over my shoulder and seeing things not finished.”

Blackburn is earnest about her interest in crafts and the craft scene, in addition to her painting.  “I’m very inspired by crafters, because it’s really hard to sew a purse and it gets so much less reverence than doing a painting,” Blackburn says, “It can take twice as long, and most people won’t pay three hundred dollars for a purse, so you can’t always get as much out of it.  Crafters should get more respect, because it’s hard!”

Lately, Blackburn has been branching out further into the craft side of things, in addition to her paintings.  She’s always sewn a lot, but she says she’s still figuring out the craft side of her work, and she’s looking forward to representing her work at the upcoming crafts festival.  Her crafts include arty stuffed animals, delightfully child-like finger-puppets and Utah-themed felt pillows with depictions of the Angel of Moroni or the Great Salt Lake sewn on.  Her sunny personality and her delightful crafts contribute so much to the local arts and crafts scene, and you can check out all the cool stuff she makes if you visit her booth at Craft Lake City.