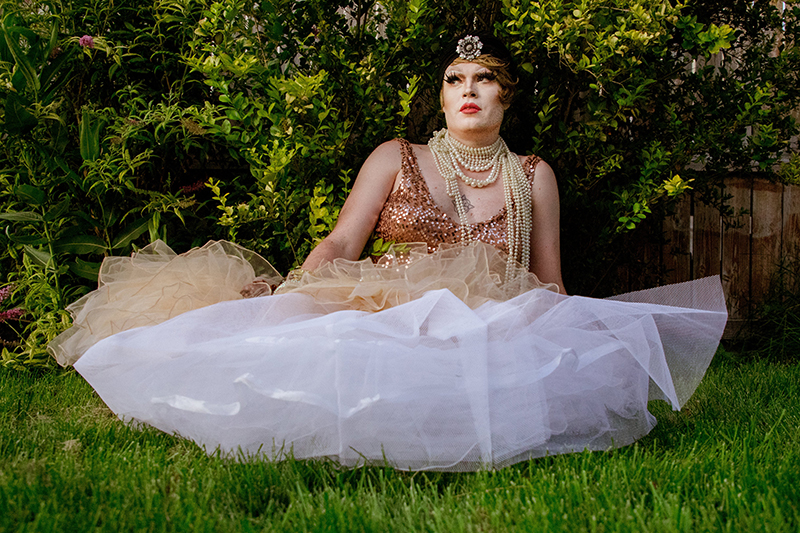 Brigitte Kiss, aka John Taylor Adams, aka Taylor, aka Tay, is one of the reigning queens of Utah Valley and holds the title “Miss Provo Pride 2017.” On an off stage, Brigitte has been working and organizing with the LGBTQ+ community in the heart of Cougar Country.

SLUG: Tell us a little history about yourself?

Brigitte: I’m a Pisces, year of the dragon and a Slytherin. I’m the second of four children from a very traditional Mormon family. I’ve bounced around the U.S. a bit, but I was born in Provo, and Utah Valley has been my home for the majority of the last 20 years.

SLUG: When and why did you first become interested in drag?

Brigitte: I was at Legends Nightclub in Raleigh in 2012. I had come out to friends at school but not my family. And to put it gently—I was a mess. Everything felt upside down. This was the first time I had been to a gay club, and the first time I had seen a drag show. During the show I lost it and was just balling big gay tears. The … legendary Kirby Colby locked eyes with me and [told] me so much of what I needed to hear with just one look. That I belonged. That I was going to be okay. And then the emcee, Emory Starr told a dirty joke and made me laugh. There were a lot of days during that time when I felt too sad or anxious to leave my room. I started playing with makeup, and I would put on a show for myself in the mirror. That helped me feel better, and then I could go about my day. After doing that a bunch of times I kept thinking about that moment with Kirby Colby and wondering who was struggling that I might be able to help. I started going out in drag, both to clubs and other LGBTQ+ gatherings. For me the most important was Stonewall Kickball. One of my teammates, Raafe, had done drag in college, and we started dressing up for games. I was a busted mess but I made people smile and it gave me a confidence I had never felt before. I can be a hot queer mess, and I can make people feel happy.

SLUG: How was your name conceived and your drag character born?

Brigitte: I took Brigitte after French pop-star Brigitte Bardot. Three things I love about her: her big blonde hair, her sea-foam voice and her gap-toothed smile. Hey, its not her fault she’s gap-toothed.

Brigitte: I am in love with our scene. For one thing this is my home and it feels very right to claim space here for queer people through drag … I’m very proud that our scene is beyond inclusive—a strong majority of our performers are women, non-binary, or transgender. The first major change [to the scene] came with the opening of The Boxcar, [a venue] where we have been able to produce a number of highly successful events like Rocky Horror, as well as queering events like the weekly karaoke nights. The second major change came with the creation of Glamateur Hour. This opened up drag in Utah County to all ages of performers and audience members [and] created a big boost for our scene.

SLUG: What does drag mean to you?

Brigitte: I believe that drag is uniquely powerful in reaching and supporting people who are “other,” and that if you ignore that power, your drag is vapid. We have to be more than sparkly gay clowns. We are witches and ministers, rule-breakers and leaders. In a more personal way, drag connected me with people who have saved my life and helped me see beauty in the world, and in myself. Drag made me a leader and mentor in my community. It has helped me really understand queerness and otherness and find the power that resides there.

SLUG: What encourages you to continue the work that you do for the LGBTQ+ community?

Brigitte: Going to get pretty personal with this one. In 2017 my ex, Alaska died and was buried under her dead name. Helping the queer community is the only way I can find to deal with her death. Her oppression is written in stone. She motivates me all the time, work harder, be kinder.

SLUG: When you’re not in drag how are you changing the world?

Brigitte: I make an effort to support the causes my artist and activist friends are promoting. I’m very happy to work with people creating fundraising events and other organizing (this is how we pay our dues). I’ve served on the board of directors for Provo Pride and volunteered extensively with the organization. More recently I started a part time position with Encircle, where my main responsibilities include welcoming clients and their families who drop in, and making sure clients get what they need out of the space.

SLUG: Tell me about your next performance?

Be sure to keep an eye on this trailblazing queen on their socials @brigittekiss on Instagram, and facebook.com/MissBrigitteKiss. Also, be like Brigitte and help our local queer communities by donating to the Utah Pride Center at utahpridecenter.harnessapp.com/wv2/donation/round-up.