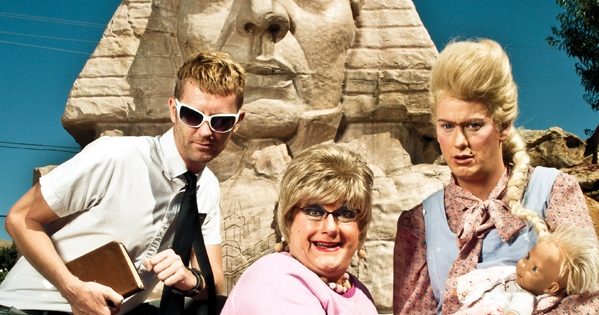 Dot Your I’s, Cross Your Ties

I’ve been writing my column for a year now and I hope I’ve helped readers of SLUG realize that this gender-bending world I live in isn’t as cut and dry as a feather boa and a fierce lyp-sync at the club. I myself was  born with a very complex persona, but my rich theatrical background has spawned many a side character I play with and bring out of the armoire every now and again.

This isn’t stuff that’s just born off the rhinestone cuff. To help delve into the complex richness of character development, I spent an afternoon with the co-creators of Salt Lake City’s very own theater darling and major gay rights activist, Sister Dottie Dixon. If you’ve grown up in Salt Lake, Dottie Dixon is someone that you’ve met before––a mother, aunt or maybe a neighbor. I sat with actor Charles Frost and activist Troy Williams, who explained why it took two men to create such a powerful matriarch.

Three years ago, Williams (who is the Public Affairs Director and RadioActive Producer for KRCL) was doing the now defunct half hour program Now Queer This. Williams felt that the program could use a little light heartedness to invert the heavy narrative of the show’s material––bashings, suicides and drug addictions that sometimes run rampantly through the gay community. Sounds like most of my mornings.

To achieve this goal, Williams approached Frost, a decade long friend and respected thespian, to help head up this relief society. Frost felt overwhelmed with the prospect of writing, recording and editing a weekly satire, but eventually rose to the challenge and Sister Dottie was born. A housewife from Spanish Fork (Spaneesh Fark), Dottie is in her 50s with a gay son, Donny and husband Don, who is a laid-off steel worker from Geneva. Frost pulled many of the best mormantics for Dottie from his Spanish Fork born and bred mother and her besties.

“She’s [Dottie] fabu in her own way,” Frost says. “She’s not well educated, yet she’s worldly wise. She’s full malapropisms, poor grammar and loves her gay son.” Frost wanted to make Dottie everything he wasn’t––a devout Mormon mother who embodied the true-natured women who are the advocates and champions for, as Sister Dottie puts it, “The miniturized and minoritized people of the world.”

Williams, who edits the episodes, wanted to jump on the covered wagon and help write the Sister Chronicles. As an Oregon native, Williams confessed it was initially difficult to develop the syntax for Dottie, luckily he had a few Spaneesh lessons from Frost.

Initially, Dottie made guest appearances on Now Queer This once a month. After the program was canceled, she got her own 3-minute spots. She currently appears every Friday at 3 p.m. and Saturday at 10 a.m. on KRCL. It’s really not surprising that Dottie’s persona outgrew these small time slots. She needed her own stage show. One that could deliver a more positive message than say… Broke Back Mountain, which in the end shows if you’re gay, you’re going to get fag-bashed and live in a trailer for the rest of your life. It took some convincing to get Frost on board. He feared actualizing the character and putting himself out there to be judged. He was quite comfortable living Dottie behind the mic, but worried about being able to deliver her joie de vivre with the same bravado.

Well thank god he got over it, because what trans-pired was The Passion of Sister Dottie S. Dixon, a powerful show that profiles a woman who, like Joan of Arc, is fiercely loyal to her convictions and fights a battle to stay true them in a hysterically endearing way. It premiered last May at Rose Wagner Theater and every performance sold out.

Luckily, Dottie received a ‘calling’ to bring it back with more spirit than ever. A newly revised The Passion of Sister Dottie S. Dixon: Second Helpings will open up Oct. 2 -25 at Pygmalion Theater Co.

I hope I’ve helped to inspire you into finding that amazing drag hag within. Caress it, embrace it and when you hit a rough patch of creative developmental block, I want you to drop to your knees, brothers and sisters, raise your arms to the Lard and shout, What would Sister Dottie do!

SLUG: Favorite thing to cook?
Dottie Dixon: Well kid, I’m known fer ma famous dishes such as Common Ground Beef Casserole, Patatas and Peas and Horseradish Cobbler and what not. But I guess ma favert thing would haveta be ma famous Marmon Cookie Salad. After all, it got me on the front cover of Wasatch Women, and that’s not something ya can shake a finger at!

SLUG: Favorite Mormon swear word?
Dixon: “Donnie you little shit!” I have ta admit I’ve said it enough in this life to git me permanently assigned ta the Terrestrial Kingdom when I die. I just hope the good Lard is fergivin’ on this one.

SLUG: Luxury item on Survivor?
Dixon: Cases & cases of Jumbo Diet Dr. Pepper. You simply don’t want ta be around me when I haven’t had enough in one given day. Nothing better than a Jumbo Diet DP and a Xanax. Either that er the onion loops downta Glade’s Drive Inn.

SLUG: Favorite Temple? Why?
Dixon: Well it hasta be The Provo Temple I guess, cuz that’s where me and ma Don was married. But it certainly ain’t the prettiest. I’d have ta give ma vote fer prettiest ta the St. Garge Temple I guess, all that white against that red rock of Southern Utah, it simply takes yer breath away kid. Plus it is the only place in Utah you can find Palm Trees. Lawsie––that should say somethin’!

SLUG: What did you last spend money on?
Dixon: Cartons and cartons of Hubby-Hubby Ice Cream, Ben & Jerry’s new flavor. It replaced Chubby Hubby, in honor of Vermont legalizing gay marriage and what not. I was sa proud of those creative folks overta the Ben & Jerry’s factery. Donnie and I bought up every carton in every 7-11 in Utah County, and held a big old-fashioned Ice Cream Social fer Donnie and all his gay friends, in hope that one day Utah may be as wise and enlightened as Vermont! Don’t hold yer breath honey! What flavor of ice cream will Ben & Jerry’s create when that marvelous day arrives, maybe Elder-Elder Elderberry? Hell, maybe I’ll just create it, and send that idea right to em’! Nothin’ like bein’ prepared fer when pigs start flyin’!