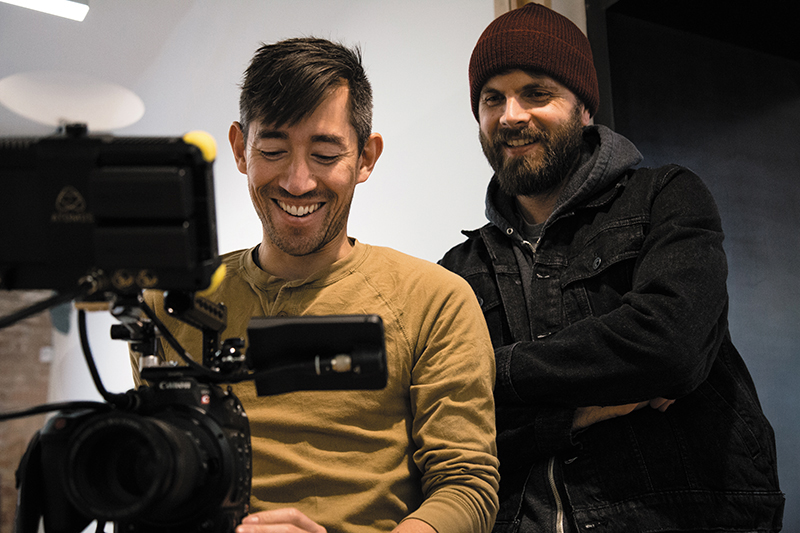 SLC native filmmaker Kenny Riches and Big Cartel’s Matt Wigham came together with the words “small and sustainable” in their heads, wanting to create and help create films. They set forth and started a production company that is working to keep creativity in the hands of the filmmaker, and have created what is now known as Dualist.

Dualist produces small-budget, independent films nationwide. Wigham is the founder of Big Cartel, a tech company based in SLC that helps independent artists create websites to sell and market their merchandise. After 13 years of working with Big Cartel, Wigham wanted to branch out and pursue other side projects in the artistic world. Having a love of film for many years, he decided that he wanted to start investing in movies. “I’ve always been drawn to film,” Wigham says. “Sundance, every year, happens in our own backyard. The closer to and more I got [from film], the more I wanted to be involved.” Wigham soon realized that he wanted to do more than just fund movies. He wanted to get into the artistic process and dive in with filmmakers, helping them both financially and creatively. He connected with Riches through mutual friends, and after Riches finished a film in 2015, the two decided to work together.

Riches made his first feature film in Utah, Must Come Down (2012), then moved to Miami where he made his second movie, The Strongest Man (2015), which went to the Sundance Film Festival that year. Riches and Wigham had almost worked together during the filming of The Strongest Man but were unable to connect. When it was time for his next project, Riches knew whom to reach, and thus, Dualist was born. “I hit up Matt, and he said, ‘Hell yeah, let’s do this,’” Riches says, “‘but let’s actually do more.’”

They quickly saw that they could give filmmakers more creative freedom as a production company. Wigham identifies that while creating their first feature film, many people get bogged down with larger companies, who often take creative control and alter the artist’s work. “The more we worked together, we realized we didn’t want to have to go through the industry gatekeepers,” Wigham says. “We didn’t want to be sitting a year trying to get a film made.”

Riches and Wigham express that it’s important for them to move forward in a way that will ensure that Dualist sticks around. They don’t want to break the bank for a new movie and hope that filmmakers who don’t want to give up creative control will be drawn to them. Dualist instead aims to be an ally so artists can go through with their vision rather than jump through multiple hoops to meet studio executives’ expectations. “We hope that people are drawn to us because we aren’t going to gut their movie,” Wigham says. Dualist helps to facilitate allowing filmmakers “to make whatever weird thing they wanna make,” as Riches puts it, while guiding them through an editorial process. “We go through rewrites with them,” Riches says. “We help them develop their ideas. We’re involved creatively without dictating what they can and can’t do, but we try to be there to support what they are making.”

Dualist now has three productions in the making. Riches’ upcoming film, A Name Without a Place, was filmed in Florida, and is about a young man going on a journey just outside of Miami after finding a travel journal that his twin brother left behind after dying. It is currently in its festival-submission stages. The second film in Dualist’s budding collection—Sanzaru, written and directed by Xia Magnus—is a suspenseful drama that was filmed in Texas, about a creepy house with an energy that stirs up the past of an elderly woman’s caretaker and her nephew. The third film by Sundance 2019 Knight Fellows Jonathan and Michael Cuartas is currently in pre-production but is set to film in Utah, according to Wigham.

As to how local filmmakers can work with Dualist, Riches and Wigham are receptive and just need to become acquainted with the person’s work first. “I am always pretty approachable,” Riches says. “I keep a pretty open mind and love hearing about what people are making—local artists especially. I think it’s cool to hear from people in Utah, and I would love to get more submissions.”

Riches runs The David Ross Fetzer Foundation for Emerging Artists, which gives grants to filmmakers both locally and nationally. The foundation started in 2013 and was meant to honor the life of Riches’ best friend, Davey Fetzer, who had passed away. Riches works with Fetzer’s family and loved ones to honor his name through the foundation. Dualist hopes that the people who receive grants for short films through the foundation come and work with Dualist in the future. Local filmmakers under the age of 35 can apply for a grant, which gives them a $2,500 grant to create a short film of 16 pages or less. “Local filmmakers have a huge advantage,” Riches says. “We get hundreds of national applicants, but we get very few local applicants. I can’t express this enough. Local people should be applying for this grant, and that’s a good way for us to see what people are capable of making.” With these kinds of local prerogatives, Dualist may well spur artists in Salt Lake City and Utah to root arthouse filmmaking in our community.

Filmmakers who are interested in receiving a foundation grant can visit thedaveyfoundation.org.