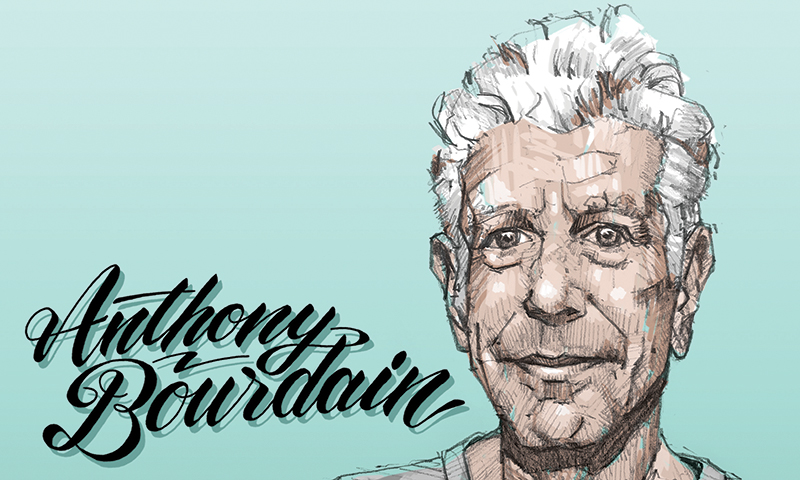 I’m not sure if a word exists to describe the combination of anger, shock and genuine sadness I felt when I heard that Anthony Bourdain had taken his own life. To say that it was a surprise or a tragedy does not give it enough weight. It was heartbreaking and unexpected. As one who felt like he had come to know Bourdain through his books, TV series and appearances, it hurt on a personal level. The world had lost a friend. I did, too.

In the summer of 2010, Bourdain made an appearance at Salt Lake City’s Abravanel Hall on a spoken-word tour promoting his second book. Medium Raw is a sequel of sorts to his seminal 2000 book, Kitchen Confidential. SLUG wanted to run an interview. As the only SLUG food writer to have read Kitchen Confidential a half-dozen times, I was a natural fit to write the piece. I had some travel commitments that complicated the publishing timeline. If I was going to do it, I was going to need to get it finished months before his visit to Salt Lake City.

Bourdain was generous in accommodating my schedule. SLUG was the first media outlet from Utah to contact and interview him. As a result, much of what he learned though our conversation about Utah food culture was completely new to him. Explaining what funeral potatoes were to one of the culinary world’s greatest thinkers was an honor and a privilege. I was able to ask Bourdain about his planned visit to Salt Lake City, his history of punk rock fandom and his influence on the food industry. I also asked him what he thought about several traditional Utah dishes. I have long been proud of the resulting published interview.

We spoke of his coming of age as a chef on the streets of NYC at the same time punk rock was getting its own foothold. He remembered being a huge fan of Richard Hell & the Voidoids, Television and Ramones. He said, “I was also a Velvet Underground fan and a huge Iggy Pop fan. I remember what an extraordinary, spit-in-the-face presence he was. The first Stooges album, an antisocial masterpiece, came out in 1969. Hippies were dead from that moment on. You need only to look at how awful and saccharine and bloated rock n’ roll was in ‘72, and then you look at what some other people were doing around that time, even before punk, and it makes bands like the [New York] Dolls and the Velvets and Iggy and the MC5 all the more extraordinary.” When asked about Iggy’s work with a reunited Stooges, he had only kind words to say. Bourdain was as big a fan of music as he was of food and food culture.

He spoke about writing Kitchen Confidential with the idea that only a small subculture of restaurant-industry folks would read it. He was surprised by its success—a success that allowed him to exit the restaurant kitchen at a time in his life when continuing a cook’s lifestyle would have undoubtedly led to alcoholism or drug addiction. In every way, he felt incredibly lucky.

We also talked about Utah food staples like funeral potatoes, pastrami burgers and Jell-O salads. He recognized Jell-O salads as a throwback to 1950s cuisine. Given our inability to embrace anything other than Leave It to Beaver cultural norms, this made perfect sense. He had too much respect for pastrami to put it on a burger, finding the idea completely sacrilegious. The only other foodstuff to garner as strong a reaction was the Utah County tradition of making tiramisu with Postum instead of coffee. He was completely on-board with funeral potatoes, though. He said,

When Bourdain took the stage at a sold -out Abravanel Hall eight years ago, the first words out of his mouth were that he wasn’t sure anyone would come out. He’d heard about us and our funeral potato casserole, and he wasn’t sure we would welcome a guy like him to our city. But welcome him we did. During his performance, he mused about how success had come late to him in life and how he didn’t feel any need or requirement to present any consistent character identity. He was able to be his authentic self. As long as he was entertained and was making interesting television, he felt like he was doing his job. He said that he would know it was time to quit if he ever got to a point that he was just going through the motions. That moment must have come. I would have preferred a different ending, but this was not my choice to make. As we face down a world without Anthony Bourdain—the charming son of a bitch that he was—let us strive to apply the lessons that he taught us. Let us praise the talented, laud the authentic, reject the artificial and look for things beautiful and praiseworthy in the slummiest of back-alley places. God bless you, Tony. You were one of the good ones.

Read the full 2010 interview with Anthony Bourdain at SLUGMag.com.