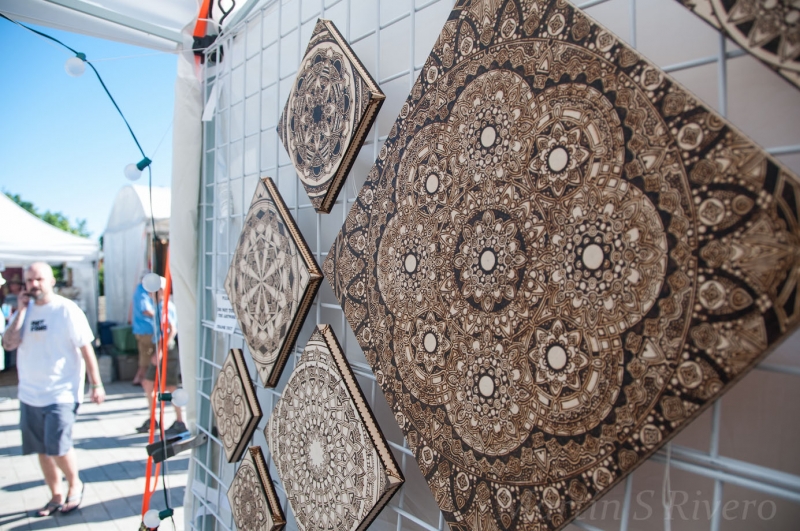 Eleanor Scholz’s wood-burning mixed media, illustration. Photo: Martin S Rivero
The final day of the Utah Arts Festival showed no signs of depletion for the weekend’s closing. Artists continued sharing their passions with their audiences, and the creative atmosphere tangibly presented itself at every turn. According to their website, the Utah Arts Festival is “the largest outdoor multi-disciplinary arts event in Utah, with attendance hovering over 80,000 each summer.” After experiencing this weekend, the right to boast this fact is irrevocable. The hard work, time and dedication put into collaborating the event has been presented tenfold. With some 1000 volunteers, over 250 artists and performers, and over 52 sponsors, every hour put into the event has been generous.The greatest treasure hunt I experienced at the festival was uncovering the booths that were often flooded by crowds of people. For my first three days, the EnjiGo Makers Space booth had so many people surrounding it I never seemed to manage to find my way in. Sunday I finally broke through the crowed to see what the fuss was about. The integration of technology in art is an idea that has been around for some time in the world of animation but their display showed technologies that surpassed my previous knowledge and assumptions. I watched as a 3D picture created miniature sculptures and a robotic hand drew chickens and sugar skulls. EnjiGo has three basic goals: education, collaborative creation and idea incubation. Beyond those goals, they provide the evidence of Walt Disney’s famous saying, “if you can dream it, you can do it.” The evidence, of course, being in the form of a piano created out of a computer and bananas.Hypnotically intricate designs burned into wood panels decorate Eleanor Scholz tent. Scholz fell into wood burning just over a year and a half ago. Her pyrographic images are centered on radial symmetry, growing exceedingly more complex the closer the patterns are viewed. The resemblance in her work to mandalas from Hindu and Buddhist origins led to her exploring the meditative characteristics and discovering more about the religions, inspiring her work further. “I’ve always been a devoted doodler,” Scholz says. “I started drawing on wood, I enjoy the tactile nature of it.” Being no stranger to the art scene Scholz shares her home state pride, “I love being an artist in Salt Lake, everyone is extremely supportive,” she says. “It’s amazing.”As I was leaving the festival I noticed some vendors just outside the gated festival grounds who had set up their wares. The sentiment of these artists always inspires me, knowing that being on the opposite side of that fence next year is their goal, and thinking about how many artists inside the festival started on the grass strip on the opposite side of the side walk. One such artist specialized in the art of breathing life into books and binding that would other wise be put to rest. Brook Burgee, of Red Bard Collections, creates journals and sketchbooks from hardbound novels that are on the cusp of ruin. Her journal creations initially started as Christmas gifts, and have since developed into what she taught be to be a cottage industry. “The goal is to provide flexible employment for those unable to maintain regular part time hours,“ Burgee explained. The greatest challenge is finding the right books to revive, and she expressed that she is always looking for savvy book-hunting volunteers.

The Utah Arts Festival is a prime example of the perfect blend of culture and counter-culture that is embraced in Salt Lake City. The Festival’s importance is evidence in the side-by-side mapping of artists that would otherwise never be aware of the others’ existence. It is also present in the eclectic collection of patrons, walking amongst one another sharing and delighting in the same sights, sounds and tastes. My last hour at the festival, I stopped looking at the individual mechanisms, but instead watched, in silent reflection of what the Utah Arts Festival has provided as a whole for its artists and attendees. Above all else the Utah Arts Festival shows not only the importance of art in our community, but also the importance of our community to our artists.