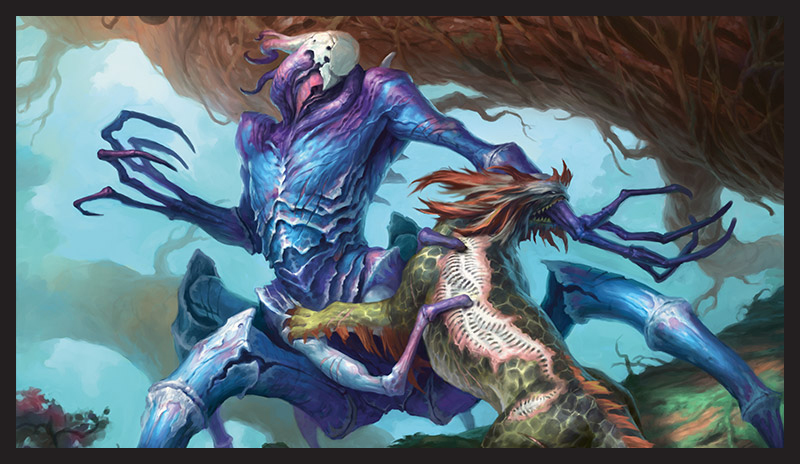 Battle For Zendikar: How to Harness Cosmic Evil for Fun and Profit

The tabletop gaming turf at Salt Lake Comic Con is a place that I always mean to check out, but I’m never quite able to get around to it. This year, however, the convention happened to take place on the same weekend that Magic: The Gathering was having a prerelease for Battle For Zendikar, the newest expansion in the popular card game. Fellow SLUG Magazine writer Henry Glasheen discovered that Epic Puzzles & Games was holding a prerelease tournament right there in the convention center, and I decided to try my luck against other local planeswalkers.

Zendikar, the Eldrazi and You

The past Zendikar sets have been creature-heavy, focusing on the monstrous Eldrazi and their ability to take giant bites out of players’ permanent count with the Annihilator ability. I didn’t see a whole lot of this mechanic getting thrown around with this release, with the exception of Bane of Bala Ged, which was pretty brutal once I got it out on the table. Instead of Annihilator, the set introduces the Ingest mechanic, which causes players to exile the top card of their libraries when they take damage. As an apparent counter to the Eldrazi ability to mill a player’s library, BFZ brought back the Landfall and Rally mechanics for those who are fond of their creature decks. The mechanic that actually saved my ass on more than one occasion was Awaken, which lets the player tack a bit more mana to a cheap spell in order to transform one of their land cards into a creature.

My deckbuilding strategy at prereleases relies on a volatile mixture of card multiples, bombs and a little bit of intuition—it doesn’t always serve me well, but today I had a pretty clear direction. It began with the Sire of Stagnation, a 5/7 Eldrazi that makes opponents mill their libraries whenever they play land while benefitting the player with a two card draw. That beast, along with Bane of Bala Ged and a small army of Voracious Nulls, was the foundation for my deck. I had some decent blue control spells like Clutch of Currents and Rush of Ice, many of which had the Awaken ability that proved extremely useful. I’ve always been fond of black mana decks because of my cold, black heart, but blue magic makes me nervous. It’s a color that can really backfire if you don’t know what you’re doing, which is a good description of myself at any given MTG tournament.

My first match was against a player who had a pretty tasty green creature deck. It was here when I realized that my deck was pretty damn weak in the early game. My opponent was able to build a small army of low-power minions to pick away at me while I cursed my expensive cards. When he brought out the Oran-Rief Hydra and the Plated Crusher, my ass was pretty much toast. The round in which I was able to get my Sire of Stagnation and Bane of Bala Ged was a shutout, but he took the overall match with his sheer numbers.

I won the second match by forfeit, which was OK by me. It gave me time to mess with my deck and try to improve its early-game strength, which I did by subbing in two Salvage Drones and a Dampening Pulse.

My next opponent was running a white/red ally deck, and it was pretty tightly constructed. Once again, I found myself overwhelmed by soldiers and giants before I could get down to business. Our second round morphed into one of the most intense MTG games that I have ever played. I managed to get my Dampening Pulse out early, which bought me the time to build up a small army of Eldrazi drones with Ingest. For the bulk of the game, I was needling him down until he had around 8 hit points. When he dropped Breaker of Armies, I thought he was going to crush me with sheer, devastating force—which he did. When I was at around 3 hit points and he was at 5, I was getting ready to call this one of the most irritating opponent comebacks in my MTG career. But, there are moments when the gaming gods smile upon its mighty warriors, and I drew a Rush of Ice, which I used to tap his Breaker of Armies and turn one of my lands into a creature. With all of his creatures tapped, I was able to swing for exactly five damage, and that was that. After one more close game, match three went to team SLUGMag.

My final match was similar—after losing the first round, I came back with two close victories that I owe to my deck’s signature Sire of Stagnation/Bane of Bala Ged/Dampening Pulse combo. Overall, I went 3–1 at the BFZ prerelease and took home six extra booster packs. To complete this satisfying experience, I pulled a Zendikar Expedition card: Misty Rainforest. I then treated whoever was within earshot to a rendition of “I’ve Got a Golden Ticket” from Charlie and the Chocolate Factory. It was weird.

I missed out on Rise of the Eldrazi, so I can’t offer much in the way of comparison between this set and that one, but BFZ was excellent for a sealed deck tournament. The Devoid mechanic and colorless spells made it easy to incorporate multiple colors into a single deck, but it also lent itself to focusing on just one or two colors. I was unsure about the Ingest ability, but after using it to counteract those pesky Mortuary Mires, I found it to be one of those tiny mechanics that can make a big difference in the long run. This was also the set that made me truly appreciate the ability to turn lands into creatures, which was something I was always hesitant to do in the past. As always, the art of BFZ is spectacular. The Eldrazi are nightmarishly beautiful, and the landscapes perfectly capture this world that is constantly on the brink of annihilation. Ravnica will always be my MTG happy place, but after taking BFZ for a test drive, I heartily welcome the arrival of our Eldrazi overlords. Make sure to check out Henry’s battle report here.