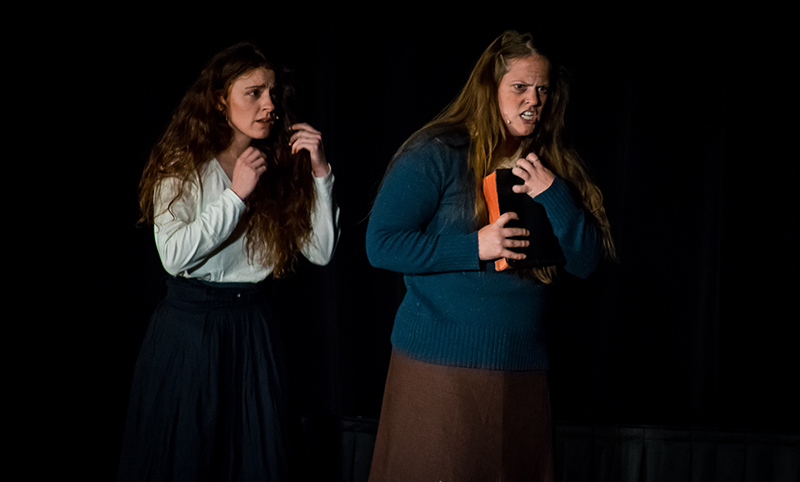 Blood and Bats: Two Impromptu Panels You May Have Missed at Salt Lake Comic Con

Panels at Salt Lake Comic Con can be hit or miss. I might be a bit of a snob in this department, but I like it when panels have guests that bring something to the show before they open the floor to questions. Of the panels that I checked out on the second day of Salt Lake’s annual nerd fest, two of them blew me away with unexpected awesomeness.

I was seriously burned when I saw Evil Dead: The Musical, which was little more than a bunch of dick jokes and flat notes that didn’t show adequate respect to the source material. Based on this experience, I expected something similar out of Carrie The Musical.

I’m glad to say that I was totally wrong. Utah Repertory Theater Company treated Salt Lake Comic Con guests to a sneak peek of their upcoming performance of their take on this obscure musical adaptation. Based on Stephen King’s novel Carrie, which is one of the finest meditations on both adolescence and brutal revenge, the musical digs deep into the story’s thematic elements and tells a surprisingly poignant tale about loneliness and the evils of bullying. While we didn’t get to see the famous prom scene, the cast promises that those who come and see the show during its run will be treated to a splatterific finale. Natalia Noble lends her powerful voice to the character of Carrie, and I got some tingles when she predicts that her name will be like rumbling thunder. Because it will. After she murders her bullies with telekinesis.

Carrie the Musical will be playing at the Gateway Mall from October 30 to November 15. Ticket holders should come prepared to be splattered in fake blood.

I first encountered The Aquabats when I was working at the Sam Goody in Fashion Place Mall. I was shelving our weekly shipment of CD’s, and I came upon an album with a giant floating eyeball looking furiously down upon a group of dudes in yellow tights. When I saw that the album was called “The Aquabats vs. the Floating Eye of Death” I couldn’t help but imagine what it would actually look like if this oddball super-team did battle with the Floating Eye of Death and its minions. While the stories that they told in their songs accurately set the tone for the bizarre world of the Aquabats, their ideas begged to become visual. In 2012, the band starred in The Aquabats! Super Show! on the Hub Network, becoming one of those unusual forms of entertainment that appeals to all ages. When the Hub Network was crushed out of existence, however, the team was in need of a new home.

As performers, the Aquabats know how to work a crowd. MC Bat Commander and his team know their audience, which is one of the reasons that they’ve gained such a cult following. They clearly love what they do, the fans clearly love what they do, and there was nothing but a sense of mutual appreciation present during their panel. The younger audience members had the best questions that I think I’ve ever heard at a con, my favorite being when a small boy criticized the team for not knowing that there was something suspicious about a woman driving around in a truck made of donuts.

The panel concluded with a short video clip in which MC Bat Commander takes his show idea to a Hollywood wizard played by Jack Black. As Black agrees to help him, he blows into a spiral horn to summon more teammates. A surprising list of comedians were among the recruits, including Weird Al Yankovic, Thomas Lennon, Jon Heder and Tony Hawk. It’s representative of the comedy clout that the Aquabats have been able to generate, and hopefully it signifies the team’s return to television. The panelists mentioned talks with Netflix, along with a few crowd funding opportunities that they have on the horizon. Fingers crossed—somebody needs to tell their weird-ass stories.

Read More: You can check out more Comic Con stories like the recap on these panels on SLUG’s Salt Lake Comic Con coverage page!