00:00 / 15:25
Spotify Stitcher
RSS Feed
Share
Link
Embed
The last panel I went to was “Mega Man: Powered Up!” and was by far the most heated panel of the three. Things got a little out of control when a man dressed in a full-on My Little Pony jumpsuit stated that Mega Man would always be superior to Zero, because supposedly they keep bringing Zero back, while Mega Man is a constant, which caused the other members of the audience to simultaneously start yelling that they agreed or disagreed with this guy’s theory, and why he was right or wrong. 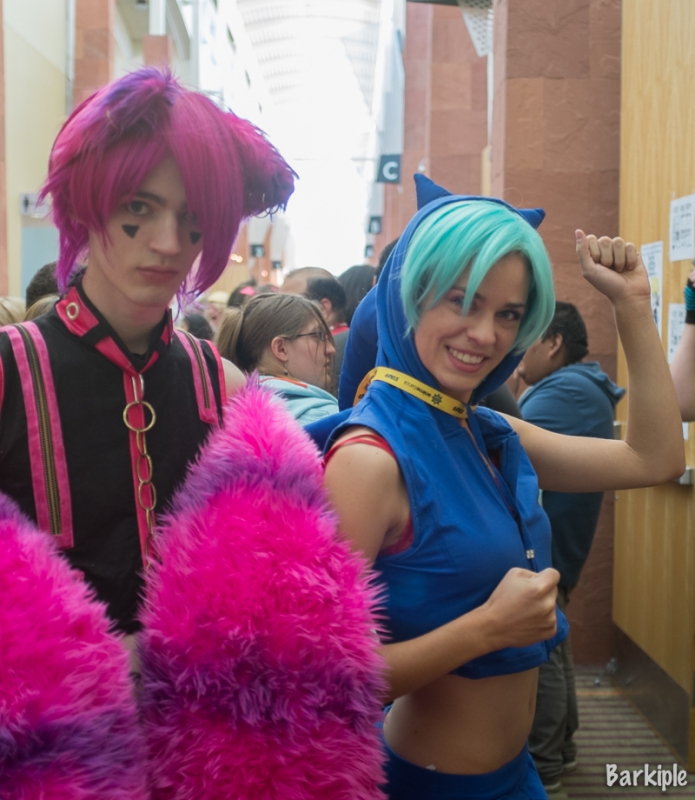 Observing, Anime Banzai in Layton on Oct. 19, I have to say I was surprised at the turnout. Boasting an attendance of over 4,500 fans packed into the Davis Conference Center, this is no small thing, with lines stretching through the lobby and outside each meeting room. There’s a huge room set aside for console and arcade gaming, separated by console—including Wii, Xbox 360, classic consoles like SNES, and even a Sega Dreamcast. The arcade games included standards like DDR and multi-player Pacman, while also introducing me to new games I’ve never heard of like Drum Mania 6th Mix, which is basically Rock Band with only drums. There was also a game called ReRave, a self-titled “Reaction Based” game in which players picked a song and tap, hold, or otherwise move a rotating circle in time to music. On paper it sounds really boring, but it actually looks pretty fun, and the best part is that you don’t have to hit the arcade to play it—it’s available for download in the Apple App Store.

At a two-hour panel, titled “A Guide to Cosplaying,” I assumed would be an informative lecture on beginner cosplay. Boy, was I wrong—and judging by the flow of people coming in and then promptly leaving, I wasn’t the only one who felt this way. I stuck it out to see if there was anything worth repeating and honestly most of it was fluff. We were treated to a two-hour rant about gender politics, the unfairness of Homestuck hate, stories about their exploits at other cons, Tumblr, and many other irrelevant topics, by two people who admitted that they made their costumes the night before the con (Note: I normally don’t critique other people’s cosplay, but in this case I feel it’s important to point out that they were hosting a panel about cosplaying, therefore shouldn’t have streaky body paint and costumes that are falling apart during the presentation. Frankly, I found their lack of preparation disrespectful).

However, I managed to gather a few useful pieces of info for beginner cosplayers: 1. Acrylic paint SHOULD NOT be used as body paint. Apparently, it restricts the pores in your skin from breathing, and supposedly can make you pass out. I can’t validate the passing out part, but I do know that the “non-toxic” label on acrylic paints doesn’t make it safe to put on your skin. So at least they got that right. 2. Don’t Procrastinate—kind of ironic coming from them, but they proved their own point: If you procrastinate, you’ll have a shitty looking costume. 3. Don’t buy wigs from online stores with “cosplay” in the name, as they’re overpriced. If you buy from eBay or Amazon, they’re the same quality but cheaper (probably because they’re made in a Taiwanese sweatshop, but if you don’t have any ethical obligations to it, then more power to you, I guess). 4. To avoid awkward confrontations, always refer to the cosplayer with the gender pronoun of their character. This was followed by a 45 minute monologue about how they always get mistaken for girls, but are actually boys and want to be referred to as such, and how rude it is when people don’t refer to them correctly—um ok, I understood your point after about five minutes, but whatever, please take more of my time beating this topic into the ground when we’re supposed to be discussing con etiquette. Toward the end there was a discussion regarding fandom becoming like a family, during which they declared that all fandoms need to be respected whether you like them or not—but then proceeded to talk a bunch of shit on furries and the My Little Pony fandoms, saying that furries are creepy and they make one of the panelists blackout when he sees them, and that since their 11-year-old sisters watch My Little Pony, that it’s childish and weird for adults to like it. Um, alright … I guess that’s what I get for attending a panel done by a 17-year-old and a 19-year-old. Yikes!

Thank god the next panel I went to was more interesting (and relevant!) than its predecessor. This one was called “The Evolution of Card-Gaming,” and turned out to be my favorite event, even though I know literally nothing about card gaming, except for Blackjack and Euchre. I thought the panelists were incredibly knowledgeable about the subject, and were charismatic to boot. The panelists started off by explaining that the origins of card gaming started in China and were paper dominoes or mahjong tiles. They then moved on to gambling card games and the invention of Bicycle cards and the evolution of playing cards in games like poker, rummy and blackjack. As they were about to move on to collectible card games, someone raised a question about where baseball cards fit into the scheme of things—his argument being that they were the predecessor to collectible card games by popularizing the collectible card market, which is something I’d never considered before, however I also wouldn’t think to include the entire origins of the card-gaming tracing back to ancient China. Once we reached the collectible card-gaming section, everyone really started participating more. I learned a ton about CCGs and how popular they are. For example, Magic: The Gathering was the first CCG, created in 1993 and is now printed in over a dozen languages and currently has over 10,000 different cards in print. I was kind of surprised, however, to learn that Pokémon and Yu-Gi-Oh (both originally designed for the children’s CCG market) are the most popular CCGs today.

What I really liked about it was that the panelists broke down each type of CCG without being condescending about it—such a rare feat in the gaming world. I learned the difference between a deck-building game, a non-collectible card game, a standalone game, and a living card game. The panelists introduced a few lesser-known card games and even offered to teach anyone who was interested how to play in the card-gaming room—and I desperately wish that I had had the time to learn to play. I loved how the audience was so active, as were the discussions—even though I had almost no idea what they were talking about. The arguments about fandom-based CCGs were fascinating, the discussions about CCGs’ anime components were illuminating and the overall mood was genuinely fun. This was what I was expecting for Anime Banzai and I was pleased to know that my previous experience was just a one-off and not a reflection of the convention itself.

The last panel I went to was “Mega Man: Powered Up!” and was by far the most heated panel of the three. Its focus was supposed to be a discussion on the many different Mega Man series, but got derailed or hijacked by fans wanting to discuss how Mega Man impacted their life. Many childhood stories were told, there was a surge of discussion over fan-based games vs. official releases, and lots of love for Mega Man X. Things got a little out of control when a man dressed in a full-on My Little Pony jumpsuit stated that Mega Man would always be superior to Zero, because supposedly they keep bringing Zero back, while Mega Man is a constant, which caused the other members of the audience to simultaneously start yelling that they agreed or disagreed with this guy’s theory, and why he was right or wrong. Interestingly enough, after everyone was seated and calmed down, one person made a very eloquent remark on the ingenuity of the game play, level structure and overall design and macrocosmic beauty of each series. I was impressed by the amount of insight these players had into the series, and amazed at the positive impact that a game can have on someone.

The last event I attended was the Cosplay Contest, which was definitely the highlight of the day. I was disappointed to find out that the contest would be running late, like an hour and 10 minutes late forcing con-goers to decide if they wanted to stay and watch the show or go to another panel. When someone finally came onto the stage, it was only to tell us that they were having technical difficulties therefore the show would be further delayed. After seriously contemplating whether not I should leave, the show finally started. Beginning with the kids cosplay contest, I was treated to the world’s cutest cosplayers, my favorites being a stunningly accurate Sora (complete with mini keyblade) and Kairi from Kingdom Hearts. Next was the adult cosplay contest, which included everything from Final Fantasy to Bioshock. The most popular was Jareth the Goblin King, who was able to fully engage the crowd with a monologue Bowie himself would be proud of. Next came the skits, then the expo portion—which is for those who bought or had someone make their costume, or isn’t directly anime or manga related—the highlight of this contest was a huge, light-up robot from Warhammer 40k.

Overall, I’d say Anime Banzai was a success—it catered to a multitude of people while being informative and fun even for those who don’t know a lot about anime or manga. Most everyone was friendly—someone even went out of their way to give me some good manga recommendations. I would say that if you’ve ever been interested in anime, manga or Japanese culture or want to know more about it, Anime Banzai 2014 is for you!