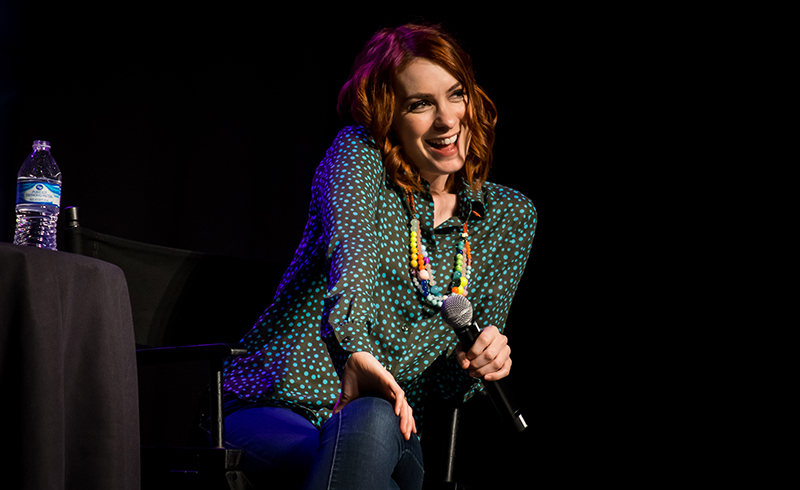 I’m still reeling from the Felicia Day panel, I’m not even done with Salt Lake Comic Con but I can already say in confidence that this was my favorite part of Comic Con. Maybe I’m a little biased because I already had a deep love for Felicia Day after reading her book You’re Never Weird on the Internet (Almost), and seeing her as Charlie from the popular television show Supernatural. She’s also appeared in a television show called The Guild, and has her own online web series that is pretty sweet. I’ve been to tons of celebrity panels over the years—not just at the Salt Lake Comic Con but also at the San Diego Comic Con which I have attended for 13 years consecutively—I can honestly say that Felicia’s panel was 1 of my top 3 favorite celebrity panel’s that I’ve ever been to.

Felicia Day didn’t have a moderator, she chose to do it Q & A style to allow her fans to ask her anything and everything—from personal stories, questions about her work, and even questions about her favorite video games and DLC. Q & A style panels are either a complete success or a total failure, there is no in-between and it’s usually the latter, but Felicia rocked her panel. She answered her fans questions while keeping the audience laughing, there was never a moment during her panel where I stopped to check Facebook on my phone or browse through my text messages. The only bad part of this panel was a fan who gave away a huge spoiler from season 10 of Supernatural that killed my interest in watching it. Salt Lake Comic Con needs to add a “no spoilers” rule to their guidelines on celebrity panel fan questions because this was an absolute bummer, but even with that buzzkill I still walked out of the Felicia Day panel starry eyed and bushy tailed. I hope that she comes back to Salt Lake Comic Con next year because I would gladly see her again.