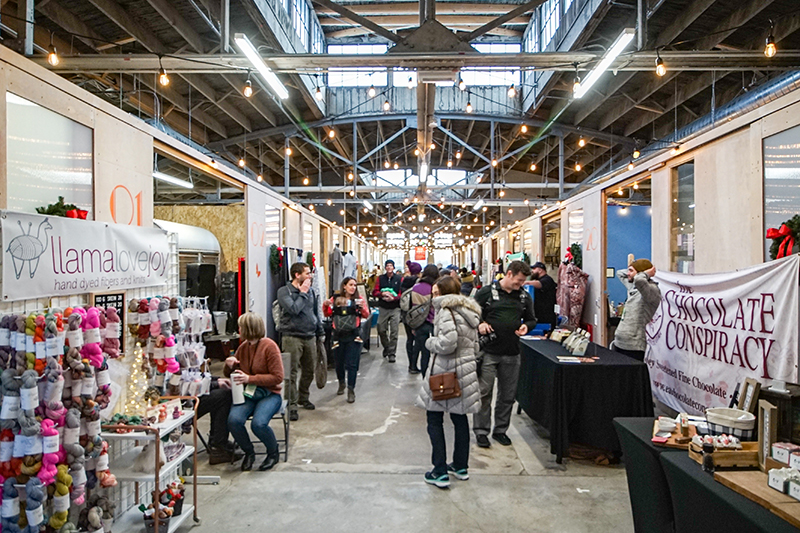 The first annual Craft Lake City Holiday Market drew more than 2000 people into a crafty wonderland. After years of envisioning a winter market, Angela H. Brown and her band of merry crafters stuffed Ogden’s newest event venue, The Monarch, with dozens of craft artisans, vendors and foodies on Dec. 7 between 11 a.m.–6 p.m.

The Monarch’s artists-in-residence opened their studios up to the curious crowd that browsed table after table along the hallways. Artists with bigger displays set up shop in the main lobby. This created a cozy labyrinth that invited guests to wander around each corner in search of charming crafts and seasonal treats. In a central hallway, kids found Santa posing for photos while elvish Girl Scouts wrapped gifts as a fundraiser for their camps.

A quick elevator ride or stroll up a ramp revealed The Monarch’s Royal Room—a window-lined, wide-open event space with Craft Lake City’s traditional, market-style arrangement of booths in rows. These large-footprint booths gave vendors room to create their own spaces—clever ideas included a lounge-like hangout from J. Henderson Woodworks and a puppet show stage over at On Hand by Hand. From macramé to graphic design to local organic treats, the quality of products created in Utah by Utahns keeps rising as Craft Lake City continues to elevate Utah’s creative community.

Ben Cosner, owner of The Bearded Jeweler, knows that a first-year market faces a steep learning curve in which a lot must be learned in a short period of time. Early mistakes are quickly corrected, but that might lead a vendor to wait a year or two before joining a new market. Cosner figured that Craft Lake City’s decade of experience hosting its DIY Festival would guarantee success, and his brisk sales justified his trust.

Look for Craft Lake City to return to The Monarch in 2020 with another holiday market.