00:00 / 13:13
Spotify Stitcher
RSS Feed
Share
Link
Embed
Festivals where there is a large number of bands—with an equally large number of influences and references—causes the brains in most writers to melt out of their noses.

Festivals where there is a large number of bands—with an equally large number of influences and references—causes the brains in most writers to melt out of their noses. Knowing this, along with the fact that having heard some of the bands performing before and knowing the scope of CrucialFest, I grabbed a box of Kleenex and headed toward the 21+ stage at Area 51 for CrucialFest day three.

First up was Magda-Vega. I formed a strong love/hate relationship with this band (let’s be honest, you can’t hate everything about a project Bill Frost is in, he’s too damned talented). Stylistically they reminded me of early Clutch with some funky melodic elements. Then they would change gears and go into ’70s punk, and then back again. These dramatic changes, combined with the capabilities of vocalist Robin Brown, are where my issues lie. When the melody is essential, Brown doesn’t have the range required. Her vocals are more of a yell, which complements the more punk songs (which really had the entire band firing on all cylinders).

Danger Hailstorm’s set began with vocalist and guitarist Terrance DH falling backwards into the drum set (this would not be the only time during the event where stage malfunctions would occur), then recovering effortlessly to complete the first song. Their music was definitely inspired by early-’90s heavy alt-rock, but with a great sense of melody. At times, they almost sounded like they were playing chord progressions from Joy Division through the speakers of a band playing at the first year of Lollapalooza. The only thing I wasn’t a huge fan of was the vocals. Live, for whatever reason, it seems like DH was singing a lot higher than on recording and, in some cases, it took away from the overall show (which was heartbreaking, since his voice always sounds good on record).

I had seen the next band, Die Off, for the first time a few months ago. Their performance and music completely blew me away. When the opportunity to see them again arose, coupled with the fact that I knew they’d be playing new music, I jumped at the chance. The best way to describe them would be extreme grindcore with the technical aspects of math rock and screamed vocals. The song “End Times,” as well as other newer material added an experimental edge that is kind of—and yes, as much as I hate using this word, but it really is appropriate—”quirky,” especially the guitar parts. During some moments it sounded as if Tim Alexander had joined them momentarily. But they played their guts out and left nothing on the stage– especially considering they were the other band hit by the “stage malfunction” bug when the microphone started spinning off the stand for the primary vocals, and a guy dressed up in a bee costume had to run onstage and assist in its repair. 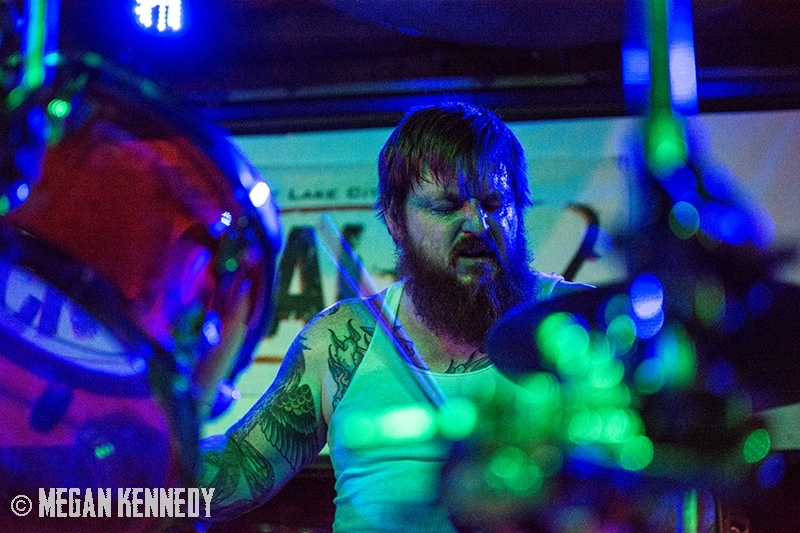 Lesbian was great and really put something unique together. In a blender, combine parts of King Diamond (including falsetto vocals that go to a death growl at times), heavy alternative in the vein of Tad, add a ten-strip of acid and blend until you have a Lesbian smoothie. They clearly have the chops and talent to do well in the metal underground. There really isn’t much negative I can say about this band other than the falsetto vocals would go off-key sometimes (but this was rare), and I wish they would play around here more often.

Other than Die Off and Lesbian, my other favorite act of the show was Agape. There was one thought I had while watching this act: this two-piece (bass/keyboards/drum machine) has put together a musical version of what I can only describe as bi-polar disorder. The two closest acts I could possibly relate them to would be AOC and The Purr Bats, but there’s so much more than that. At one moment they would play ’80s-inspired synth-funk and then go into noisecore only to take a break where one of the two members would play something for a bar or two and then the song would go into experimental industrial metal. The vocals were great because they did a lot of screaming and yelling and they had added an effect to the vocals that had a walkie-talkie feel. In essence, it sounded like someone who’s really pissed off, hard of hearing and ordering at a McDonald’s drive-thru … but it worked! Some songs would last 40 seconds, others a minute or two. If you want something truly out there, then find this band.

Finishing the show was God’s Revolver, and a better band couldn’t have been chosen. Sounding like a hardcore/punk version of classic hard rock with a splash of southern riffs (think Blackfoot), they were also one of the more entertaining acts of the night. Although they were musically solid, what really stands out was their performance and interaction with the audience. All of the members who weren’t stationary would go into the crowd at points during the performance and stand with the crowd. In fact, most of the lead vocals were performed this way. 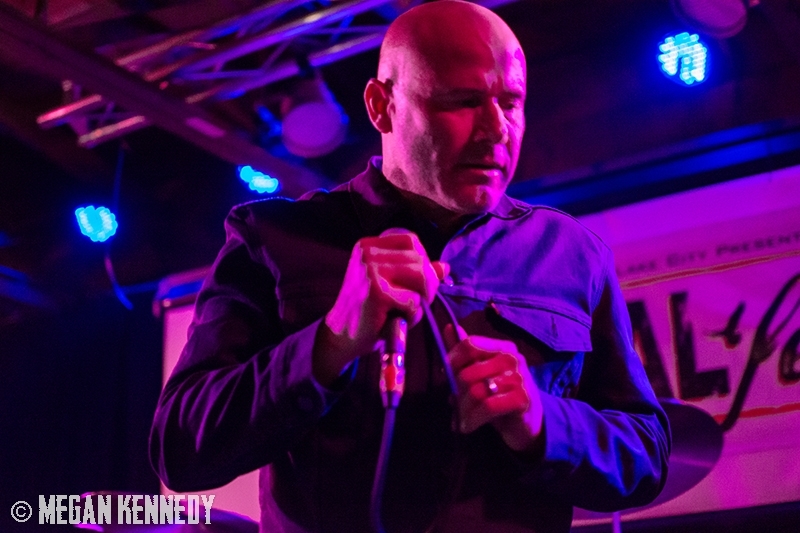 To many, myself included, this show was really the complete essence of what CrucialFest is, all rolled up into one doomy slab. Considering that it had been 15 years since headliners Goatsnake had released a new album, this was not only the largest crowd of all the events I had attended, but it also contained the most die-hard doom metal fanatics of all the festivities. It lived up to all the hype.

Up first were locals Turbo Chugg. To be honest, they were really the only band that felt out of place at the show, but they were completely amazing in their own right. They reminded me a lot of an up-tempo Kyuss with screamcore vocals. They had all the musical elements necessary to put them in the stoner doom arena, however their tempos and time changes were all such that it didn’t have that “I just smoked some weed, so I’m not moving anywhere for the next hour,” feel associated with most acts in the genre, and the vocals were really over-the-top in a great way. The entire band was lively and really put it all out there, and there was never a dull moment during their set. They’re a great band with a bright future.
And then, any sense of upbeat, up-tempo, and anything that could remotely be considered “feel-good” came to a screeching halt. For the rest of the night, the musical portion became the equivalent of turtles running in frozen honey, punctuated by highlights of that “groove-sound” associated with these bands.

Hailing from both Boise and Portland was the band Uzala. Comprising vocalist/guitarist Darcy Nutt, guitarist/vocalist Chad Remains and drummer Chuck Watkins, the band is currently completing a three-date tour. Uzala was a band that had all of the trademarks of stoner doom, with hints of psychedelia. At times it reminded me of a cross between Weedeater and Jess and the Ancient Ones. Their performance was definitely filled with emotion, and overall they did an excellent job. Really, the only thing I think that might help separate them from the pack a bit more (especially considering that soon they are going into the studio) is that they tend to be musically paint-by-the-numbers at times. If they could break through that, they could be a contender in the stoner doom world.

Eagle Twin is the band against which I judge all other sludge and doom metal. The reason for this is simple: Gentry Densley. With a voice that sounds like a cross between Captain Beefheart and an angry grizzly bear and a guitar tone to match, I love his ability to combine different elements to make something truly unique within the genre. Most artists within the doom metal world tend to lean on the minor note, chord, or key a lot to give the music it’s traditional tri-tone or “Sabbath” sound. Densley will often look for other notes and progressions in those circumstances, taking the music to someplace different. Instead of flattening a note, he’ll run a solo. Instead of three note, minor passages, he’ll play a major progression. Combine all that with the incredibly precise drumming of the hardest hitting drummer I have ever seen, Tyler Smith, and you see why I look at them the way I do. Considering they ended their set with an extended version of the song “Carry On, King of Carrion,” the best way to describe their performance would be “epic.” Great job, guys.

It was then time for festival headliners, Goatsnake. For a band that has been around for as long as they have (and with a storied history to boot), they still have it. They were really at the top of their game the night they played in the city of Salt Lake. On tour for their latest album, “Black Age Blues,” they played a set that focused on their long-time fans, but they also featured a number of tracks off the new album as well: the title track, as well as my favorite song of the night, “Graves.” What makes them so great is what I call “truth in advertising.” This band has a ton of it. Although some of their songs did have somewhat of a blues element (referencing the title of their latest would imply), these guys are still doom to the max. They hold to all of the elements of what makes this genre of music great—the groove, the wall of sound so thick it feels like cold oil is being poured in your ears, and the swagger of the classic rock sound that was the original foundation of this genre. If you are a fan of this type of music and have never seen Goatsnake, please do so as soon as you can.
That was CrucialFest day three. I had a complete blast at all the shows I went to and wanted to thank all of the local and touring bands who came out and played with as much intensity as they could muster. See you all next year!
Photos: