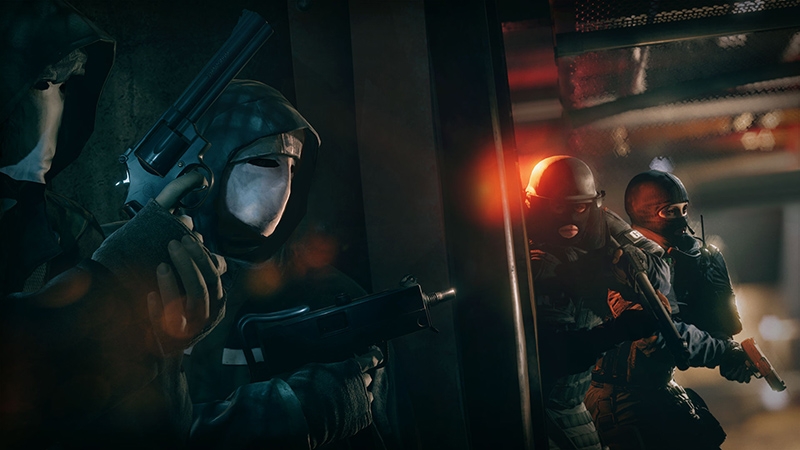 E3 2015: Breaking Down The Walls with Rainbow Six – Day Three

The last day of E3 was a clean up day for me, but when everyone else had the same objective, it really made things difficult. I wanted to get my hands on so many different games, it just wasn’t going to happen. With something as dense as this, there’s just no way one person could ever see everything they wanted to in three days.

Ubisoft ending their press conference a year ago with the reveal of Rainbow Six: Siege turned the heads of shooter fans everywhere and, since then, the team at Ubisoft Montreal went relatively quiet, other than a few gameplay videos. At this year’s E3, playing it was a necessity, because as a long time shooter fan, I owed it to myself to see how things were coming along.
Both teams of 5 have 6 unique classes to choose from, each with pre-determined weapons and gadgetry. You could take the soldier who can blow giant holes in nearly any flat surface, the Thermite expert to cut through steel barriers, or, if that’s not to your liking, then you can be the guy that swings a massive hammer to take down reinforced walls. If your team is playing defense, your job is to make it as difficult as possible for the raiding party with every tool at your disposal. You can close off open doorframes, reinforce walls and windows, lay down barbed wire, set up mobile obstacles, etc. On offense, you start with a reconnaissance drone to find where the enemies are setting up their barriers and traps, as well as locating and marking them in their hiding spots throughout the building. This forces you to come up with a plan of attack, which requires strong communication, timing, and teamwork, making for an experience that changes every time you play. The planning phase Ubisoft showed during the initial reveal was barebones in comparison, and that’s okay, because everyone sees the same map for a gracious amount of time before the game actually starts, giving both sides time to make their initial decisions before you’re put in. I can’t say I’m surprised with how well it has come along in a year, but I will say that it’s very refreshing that Rainbow Six: Siege felt a lot like Rainbow Six 3, and for me, that’s a very good thing.

With the exception of a few friends, most people couldn’t tell you that I have a strong interest in football games—not hand-egg (American Football), but the football the rest of the world knows. I would love to play them more, but my priority when it comes to sports games is dominated by the NBA 2K series. Soccer games are always fun to play even if I am getting destroyed. My history with the sport in video games has been playing the demos for EA’s FIFA series, and that was always fun, but it felt a lot like an arcade game rather than a simulation. So I was pleasantly surprised by how well Konami captured not only the drama on the pitch, but also how much weight each player moved with. I could tell mere minutes in that this series is for the diehard soccer fan. Everything is more technically sound, the player models look stunning, the animations are fluid and react to situations accurately when they catch up to another player pressuring the ball, or fight for position after a lob pass. Like NBA 2K, the controls are very difficult to pick up and play, forcing you to practice every move at your disposal. Since the show floor is loud, I wasn’t able to really get a sense of how accurately the crowds reacted to things, but witnessing the power of the Fox Engine when applied to a sports game really sold its authenticity. I will be keeping my eye on this title when it releases on September 15.

The last game I was able to check out before heading to the airport shuttle was an absolute delight. React Games (based out of Taylorsville, Utah) have created a rouge-like, rock-themed dungeon brawler that incorporates RPG elements, with a heavy emphasis on playing co-operatively. You can play on and offline with up to four other “bros” (Axl, Freddie, Lars, and Ozzie), in the procedurally generated medieval fantasy realm of Rokheim. No character is limited to a certain weapon; you choose the one that best fits your play-style, be it a wand, crossbow, hammer or sword. Upon entering dungeons, you and your friends lay waste to the enemies within. Cementing your need for cooperation, every character can pick the others up to either throw them to a far off ledge to open up a gate, reach hidden treasures, or flank enemies from higher ground. You can also stack up on top of one another to create the satisfying Bro Nado, a devastating whirlwind of destruction, and take out numerous foes quickly as one, decimating groups at a time. I wasn’t able to see the crafting element during my demo, but the ability to repurpose the resources or other weapons you collect throughout your dungeon crawls will help significantly in the harder dungeons later on. There was actually a lot more to this game than I had anticipated going into my session, including the fact that its cross platform was between PS4, PC, Mac and Xbox One. I’m always looking for more co-op games to play with my friends and this one is shaping up to be a serious time waster. React is closer than ever to completing the game and I can’t wait to get my hands on the finished product. I will be sure to have a beer in hand to celebrate the fun this game will bring to the table.

My First—And Hopefully Not Last—E3

So that’s it. E3 2015 is in the books and I’m still reeling from it. A part of me still feels like I dreamed the whole thing, probably because I’ve been dreaming about being here for more than two decades. Now that it’s happened, I’m still not sure it was real. I can’t seem to find the correct words to describe just how incredible an experience it was. I was mere feet away from industry titans like Cliff Bleszinski, Randy Pitchford and Neil Druckmann. Hell, even Shigeru Miyamoto was inches from me before I realized whom I had just walked past. PlayStation Experience may have only given me a taste of things to come back in December, but with all the professional camera crews from the big media outlets like IGN, Gamespot and many others, it all felt like I was at a red carpet event for some major motion picture release. I daresay I was schmoozing the rock stars of the industry. All of them were there to support one another. The first day of the expo, it was pretty hard not to lose my composure and break down into the annoying fan boy inside me, but by day three, I graduated from amateur to rookie. This was truly the experience of a lifetime for me, and it won’t soon be forgotten. Until next year!
Photos: