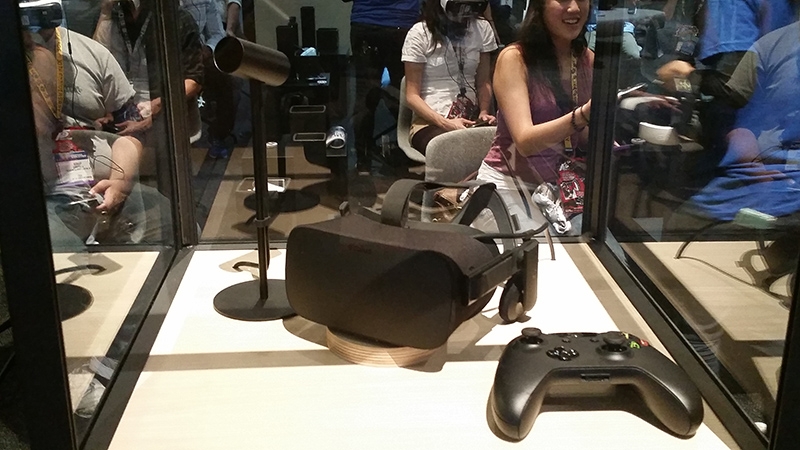 It’s the second to last day here at E3 and I think that this will go down as one of the best times I’ve had in recent memory. I got to mingle with celebrities, play some of the hottest games, have ridiculous photos taken with models that flirted with me for my obvious good looks and definitely not because they were paid to, be a rock star in front of an adoring crowd with the new Guitar Hero game and, to top it all off, I was given free beer by the last people I would expect to be handing out beer. But first, lets talk about the games, as today was a day of Virtual Reality.

I had absolutely no idea who or what these fine folks did when I scheduled my appointment, all I knew was it involved the Oculus. Once there I found out that Cubicle Ninja wasn’t a weird office game involving master ninjas, no, Cubicle Ninjas is kind of a jack-of-all-trades company.  Application design, print design, web development and motion graphics are just some of the things this company tackles. That’s not why I was there, though—I was there because they also dabble in Virtual reality.  When I arrived I was asked if I had ever seen the film Total Recall.  “You mean, the greatest movie to ever feature a three-breasted woman? Of course I have!” The team went on to tell me that the virtual reality they create is much like the film. They create worlds where you can take a vacation of sorts, “It’s more of a meditation experience, you pick your destination, pop on the Oculus and sit back and relax.” The setting I chose was a waterfall in the rainforest. It was just as described, and it was cool and relaxing. It really did the job. By hitting a button on the XBox controller, I was transported to a different part of the rainforest. At one point, you are hovering in the air about 100 feet up—that took be by surprise, as I’m afraid of heights—but after a few seconds, my feeble mind took to the situation and it turned out to be my favorite spot to chill.  When The Oculus becomes more of a household name, I strongly suggest picking up this cool software from Cubicle Ninja.

Wow. Wow is the only word to describe this experience I was fortunate enough to attend.  I walk into my own room with a representative from Oculus who sits me down and gives me a few game options to choose from. I chose EVE: Valkyrie, a game the representative told me made full use of the rig. He wasn’t lying.  When I put on the very comfortable Rift, I was surprised that I was able to wear my prescription glasses with it. I thought for sure that it would interfere or at the very least, squeeze it against my face. I’m happy to report that this wasn’t the case.  The Rift has to be connected by a cable to a PC that will run the software and preferably should be equipped with a GPU equivalent to NVIDIA GTX 970 / AMD 290 or greater, and a CPU equivalent to Intel i5-4590 or greater. That’s your problem, though, as I had everything I needed.  Playing on the Xbox One controller, Eve: Valkyrie started and I was blown away.  Featuring fully immersive 360-degree action, I found myself piloting an amazing spaceship. Anywhere I looked, I was treated to beautiful graphics. I really felt like I was piloting the war craft. The controls were easy to pick up and worked perfectly.  Check this game out on Oculus if you own a Xbox One or if you have a PS4—it will be available with their version of the Oculus—called Morpheus.

No virtual reality here, just good old fashion sandbox action. Holy shit, this game looks amazing. Although there was no demo to play, there was an excellent presentation showcasing all the cool things you can do in the third installment. If you’re not up to snuff with this soon-to-be trilogy, you play as Rico Rodriguez, an operative for organization known as The Agency.  Basically, your job is to overthrow dictators in foreign lands by any means necessary. Whether you hijack jets and ranks or prefer some old-fashioned running and gunning, you can get the job done pretty much any way you want. The plot to Just Cause 3 is not much different—you’re still the same protagonist tying to over throw an evil dictator hell bent on world domination. This time, though, it all takes place on the next gen consoles, and of course that comes with some new features. The team has added over 80 different vehicles to choose from, a wing suit, the ability to construct a wrecking ball, lush vegetation to mob through and the ability to get out of your airplane and walk freely on the wings. Why would you want to walk on the wings, though? To jump off at the last minute and crash it into your enemies, of course!  This game is all about big, juicy explosions and you get that and more some in this game. One of the bigger improvements I’ve noticed over the previous two games are the graphics, they’re stunning. Just Cause 3 has a slated release date of December 1, 2015.

I was turned off at first from the looks of the game—too cute and cuddly—but all that changed once I got to play and found out it was all those things, but fun!  In Yoshi Wooly World, you and the entire world are entirely made of yarn. Weird, right? At first, I thought that Nintendo had officially run out of ideas, but the gameplay and ability to play co-op with a friend pushed all my cynicism aside. Knitting yarn, patchwork and other materials combine into a crafty backdrop for the knit version of Yoshi to explore. Instead of eggs, this time Yoshi tosses yarn balls that he can use to clear blocked paths, tangle up enemies, or even knit together platforms and warp pipes. It was a fun, simple Nintendo game that I look forward to playing again.

Video games aside, I was treated to many other surprises. I bumped into the creator and star of Comedy Central’s Drunk History, Derek Waters. He is an awesome, down-to-earth guy who was there like the rest of us, enjoying video games. I asked if I could get a picture taken with him, to which he happily agreed. We talked for a moment about his show, and I asked him when it would come back on. He told me September 1.  We parted with a handshake as I thanked him for not being a dick and for being so down-to-earth. In other E3 celebrity news, I also heard rumors that Vern Troyer was in attendance, as well as Kanye West who, legend has it, cracked a smile while playing Star Wars Battlefront.

As the day came to a close I stumbled across a booth that I didn’t expect to see at E3, a Jesus for gamers booth. Yeah, a small group of Christians called Gamechurch had their own booth, promoting the lifestyle of Christianity by handing out Jesus Loves Gamers lanyards and little Bibles. I noticed there was a line leading up to their booth and, curious, I got in. It was here I found the reason why people were in the line—the fine Jesus-loving folks at Gamechurch were giving out free beer! It was all you could drink too.  These guys were very cool, not just because they were giving out free beer, mostly because they weren’t pushy at all. Nope, all you did was walk up show your ID and grab your free brew. I took a Bible too, since it was cool to have a Bible with Jesus playing Xbox on the cover. Not to mention it was great getting handed a beer followed by, “Jesus loves you.”
That ends my second day at E3. I love it here and am sad to know that tomorrow will be my last. Say it ain’t so!
Photos: