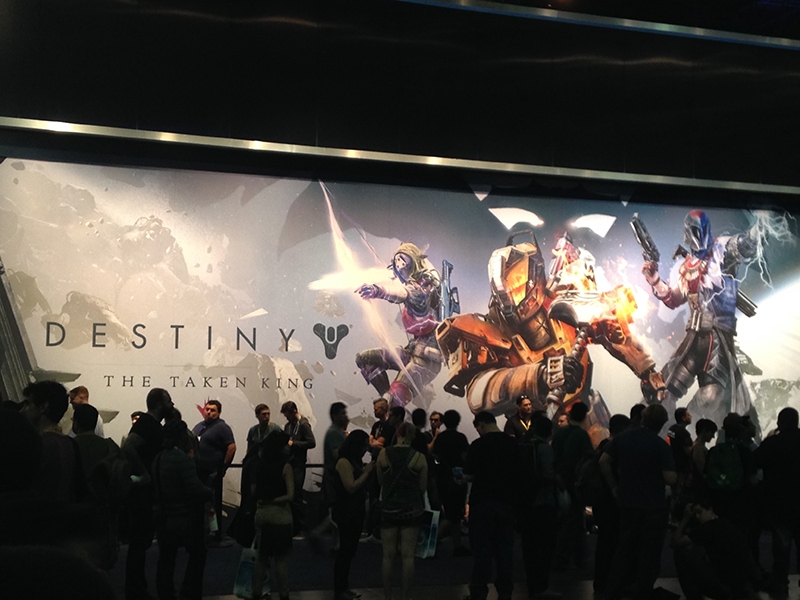 While the day zero press conferences make it easy to drool over the pantheon of new and exciting video games will be premiering this year, E3’s real power manifests itself on the exhibition floor. It’s a humbling experience to take control of a fledgling game as its developer looks on like a proud parent, but it’s these surreal moments that truly determine whether an upcoming title will be something special. My first day at E3 2015 was filled with moments like these. Whether it was checking out Armikrog with animation pioneer Mike Dietz, chatting with the ladies of 3Queens, or witnessing the grandeur of Destiny’s upcoming expansion, I find it hard to believe that I still get two more days in this magical place.

Like many of my gaming brethren, I have a soft spot in my heart for the original Oregon Trail. The crew at Versus Evil seems to share that soft spot—only they’ve thrown horned Vikings and cyborgs into the mix. My first stop at Versus Evil was with the sequel to The Banner Saga, last year’s sleeper hit from Stoic Studio. The sequel picks up right after the events of the first Banner Saga, and will even allow players to import any save data that they might have from the first game into the sequel. While the game has maintained its beautiful animated aesthetic, the gameplay feels more polished. One of the things that makes The Banner Saga so engaging is the game’s storytelling, and even during my relatively short time with the demo, the narrative was heavy with the tragedy that befell Rook during the first game.

Switching gears from the atmospheric, story-driven Banner Saga 2, I jumped headfirst into Bedlam, a post-apocalyptic adventure from Skyshine Games. Despite the fact that Bedlam uses the Banner Saga Engine, Skyshine Games has managed to craft something that feels totally unique. Bedlam puts players in charge of a huge mechanized transport called a Dozer. Each Dozer can be equipped with technicians, upgrades, and a team of soldiers. The objective is to guide the Dozer from one location to another while keeping an eye on resources and the omnipresent threat of psychotic marauders. It combines the travelling aspects of The Banner Saga with the rogue-like elements of FTL, and then throws in a bit of turn-based combat for good measure. It succeeds in taking all of those elements and combining them into a sum that is greater than its parts. I especially loved the battle animations—I wasn’t even mad when I watched a bloated yellow mutant melt my soldiers with its caustic vomit.

Finally, I got a chance to check out Armikrog, a game that combines the creativity of Doug TenNapel (Earthworm Jim) with the animation talent of Pencil Test Studios—the same creative team that gave us the point-and-click classic The Neverhood. Like its predecessor, Armikrog has been created by combining painstaking claymation with digital animation. Even in the game’s early stages, the beautiful environments and vibrant character designs are impressive—I found myself eager to solve the game’s puzzles just to see what the subsequent screen would look like. Playing the game with Pencil Test Studios owner Mike Dietz explaining the work that went into creating each scene made me appreciate exactly how creative and original games like and Armikrog actually are.

Making their E3 debut, 3Queens is a company that is owned and operated by a team of women with backgrounds in software development. They’re debuting a match-three game called Creeping With the Crudashians, an obvious jab at reality TV’s favorite family. “It’s just really fun to poke fun at the Kardashians and their lifestyle,” says co-founder Cara Florence.
While the game is in its early stages, the fact that an all-woman owned development company is debuting their first project at E3 is an important step in a field that is predominantly male. “We find talented people no matter who they are,” says co-founder Nicole Young, “We want to make game development as sexy for women as it is for men. We do a lot to eliminate the issues that we’ve all seen.” With a demographic that is 48% female, gaming is faced with an increased demand for titles that appeal to women. “Women are in a better position to make games for women because we understand them a little better,” says co-founder Maureen Coffey-Edri. In addition to making games that will appeal to female gamers, 3Queens strives to help up and coming female developers get started in the industry. “We seek to empower young girls and women because this is a male-driven industry, and I think women get scared away by that,” Young says. Creeping With the Crudashians is expected to release in July 2015 on iOS and Android.

Despite the fact that I’m still not tired with Destiny’s latest DLC, I’m now anxiously looking forward to September 15th. After taking a look at the trailer for Destiny’s upcoming expansion, I was itching to smash Oryx’s face with those sexy new subclasses.
We learn from the trailer that Oryx is looking to obliterate the Guardians who killed his son Crota, so the expansion is all about bringing his Balrog-looking ass down. During Activision’s presentation, we were shown some story mode footage in which the Vanguard intercepts a Cabal distress signal from the Martian moon Phobos. When the Guardians arrive, they see Cabal troops being pulled into interdimensional hell by Oryx, who is creating an army of Taken—ethereal, mutated versions of familiar Destiny foes. Once this process has begun, Oryx can dump a legion of Taken on your fireteam’s head at any point during patrol missions, forcing the players to rapidly adjust their tactics. While the idea of the Taken is cool, I don’t love their design—they look a bit too much like bad photo negatives. On the plus side, Oryx’s Dreadnought— which I assume to be the site of the expansion’s new raid—looks amazing. It’s an enormous, ancient space obelisk that exudes cosmic evil.
The demo revealed a new Crucible mode called Rift, which is essentially capture the flag with an explosive twist. The objective of a Rift match is to capture a glowing ball of light and slam dunk it into the opposing player’s rift. Any guardians standing near the rift get wrecked unless they can bring down the runner in time. The demo also gave us ample opportunity to mess around with the new character subclasses. The Warlock’s Stormcaller essentially turns the player into a hovering chain-lightning machine; the Titan’s Sunbreaker allows the player to summon a fiery hammer which can be used for ranged and melee attacks (imagine a scenario in which Thor shows up to a Crucible match); and the Hunter’s Nightstalker conjures a bow and arrow that can be used to anchor enemies to one another, slowing them down and increasing their damage intake. While the trailer makes these new abilities look like huge, area-of-effect damage dealers, they’re actually packed with enough subtlety and strategy to make them interesting—the Nightstalker’s bow attack is absolutely brutal in PvP since it can chain a whole team together while suppressing their abilitites. If House of Wolves was any indicator as to Bungie’s continued work with Destiny, The Taken King is shaping up to be a must-have for Destiny fans.

Today was all about placing indie publishers like Versus Evil and 3Queens on the same shelf as a big ol’ beast like Activision. It made me realize that the world of video games has ceased to revolve around state-of-the-art graphics and huge budgets. The thought of hunting down marauders in Bedlam gets me just as stoked as the thought of putting a bullet in all three of Oryx’s eyes, and that’s because we have so much talent on both ends of the spectrum. If day one of E3 2015 has taught me anything, it’s this: Now is a lovely time to be a gamer.
Photos: