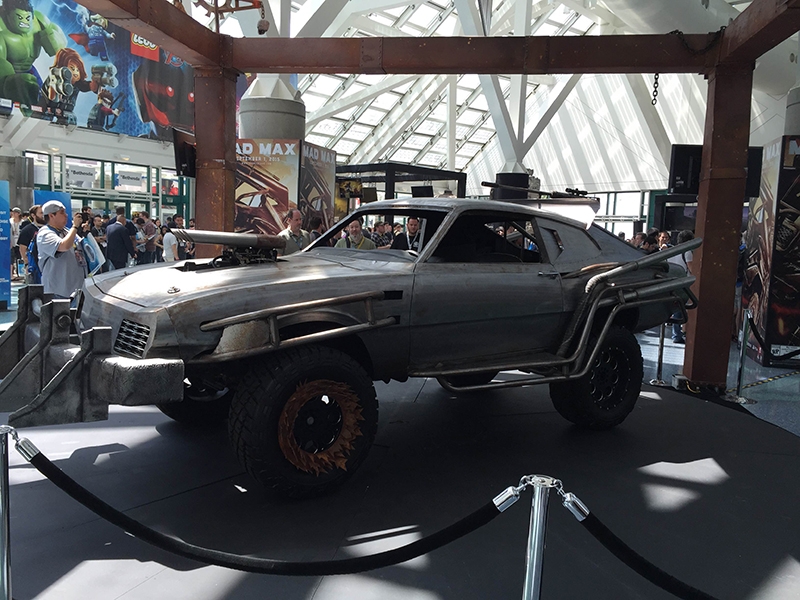 I’ve been paying attention to E3 for as long as I can remember. Being a spectator always made me happier than a pig in shit; it’s even led to tears at times. With stellar announcements during “day zero,” it was almost depressing knowing that I’d have to wait until release day to get my hands on any of these titles. Fast forward to the ripe age of 28, and I found myself here in Los Angeles, at the biggest video game convention in the world.
Being a spectator didn’t prepare me for what I was about to experience. Prior to the show floor opening, I got a glimpse of just how big this event truly is, how important it is for the industry, and why its home has been the Los Angeles Convention Center since 1995. After walking the convention center’s concourse areas to get my bearings, it was time to get my geek on.

Oh how excited I was, knowing that the first thing I got to check out for my first E3 was the follow up to the stellar Deus Ex: Human Revolution. The same pillars of Stealth, Combat, Non-Combat and Social game-play principles are firmly in place, and they have been improved in every possible way. They’ve given Adam Jensen all sorts of new additions to his augmentation arsenal, including an EMP charge to take care of pesky drones, a Nano-Blade that impales or blows up adversaries, a new cloaking ability to better help in your stealth approach, as well as a shield to turn you into a tank for when things don’t go according to plan. When things do get out of hand, you have the ability to change your ammo type on the fly, keeping firefights engaging, rather than requiring you to find cover to switch things up. With all of these great additions to Adam Jensen, the level designs became much more open to player choice. In the last installment, you only had a few different options for how to approach a situation, but in Mankind Divided, you have a plethora of options to choose from, giving you the freedom to complete your mission as you see fit. Thanks to the new hardware, social interactions —which are essential to the franchise — become more real. Instead of having to pick up on vocal queues, or minute eye-lid flutters, characters actually show emotion by either their body language or the muscles twitching in their facial expressions, making for a much more dramatic, if not more human, encounter. While this game is still far off, everything seems to be coming together nicely, and I can’t wait to get my hands on the finished product.

As I was wandering the show floor after my time with Deus Ex, I received a confirmation email about my appointment with Seasun Entertainment. The game caught me completely off guard. Three shocking things happened during my time with them: The first shock was finding out that my first interview with an industry professional was to be translated. The second shock was finding out that the company responsible for the game is based out of China, and just recently opened an office in San Mateo, California. The third shock was finding out that, amid the grandeur of their booth, there lay a mobile game pulled straight from the pocket of the game’s designer himself. I hate—repeat, hate—mobile games. They never keep me interested for longer than a week, and I hate the buy-to-win model in any form, be it mobile or otherwise. However, I wasn’t expecting to discover a turn-based strategy game. It pits three champions of good or evil against each other. Each champion is unique and offers different abilities through “soul stones.” During your battles, you gain mana and chi-mana in order to perform their different abilities on the battlefield at any given time. While you do gain experience for your characters, their stats don’t improve. Your overall level and abilities become stronger, but this was intentionally done to prevent anyone from becoming over-powered. For all you pay-to-play lovers out there, this isn’t your game. The only thing money gets you in this game is purely cosmetic, which is a breath of fresh air. This game rewards players for putting in the hard work to win, rather than those who would like to pay their way to victory.

Ubisoft’s press conferences have been littered with surprises for years now. This year was no exception. While there were a few this time around, I was only able to get my hands on For Honor at the end of the day. Ubisoft Montreal has been hard at work on a different kind of action game, a game where Vikings, Knights and Samurai battle it out in visceral, intense sword fights. Rather than two face buttons initiating your strikes, you enter a guard stance and use the right stick to dictate weather you are guarding — or striking — on the left, the right, or above, respectively. While the right stick only dictates the direction of these actions, it’s entirely different in practice, making it an “easy to pick up, difficult to master” control scheme. In fact, this is by far one of the most unique control schemes I’ve ever had to figure out.
The development team split us into two groups of four and put us into a controlled practice environment before throwing us into a capture-and-control game. We were the defenders, while the others were attackers. Here, both teams began to feel each other out, gaining a better understanding of the mechanics in combat. The first couple of minutes saw both teams swinging blindly, like kids learning karate for the first time. After these exchanges, however, everyone became much more familiar with their swords and started striking deceptively, showing a strike to the right, but striking to the weak sides, or using their guard break maneuvers to open their opponents’ bodies for devastating, health-diminishing volleys. The sense of weight to every movement, whether it’s switching guard positions or going on the offensive, is absolutely beautiful to experience. The game was still early in its alpha build, but the mechanics are as visceral as advertised, making combat stressful—it really made your palms sweat. Everyone who loves their combat up-close-and-personal should have their eyes set on this title as more is revealed in the next few months.
Photos: