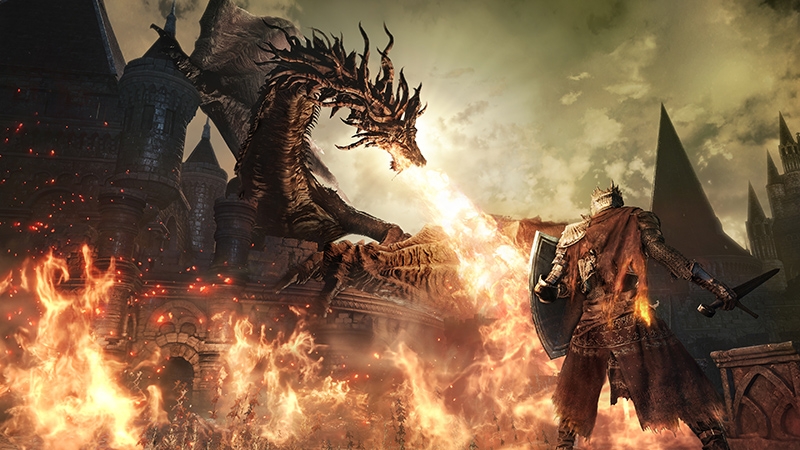 The best thing about E3 is that a mind-altering video game experience is always waiting just around the corner. Even when I think that I’ve seen every genre or game mechanic that there is to see, some crazy-ass developer comes up with something that makes me redefine what a video game is. On my second day of E3, I dug deep into the fertile loam of publishers tinyBuild and Bandai Namco to find a lineup of games that tested my boundaries in all the right ways.

Since 2011, tinyBuild has been developing and publishing games that are known for eliciting responses like, “What the hell?” and “Can they do that?” from all kinds of indie game enthusiasts. I got a chance to experience a wide range of their upcoming releases, many of which caused me to exclaim things like, “You can use a horse as a murder weapon?”

No Time To Explain

Let’s start with the game that started it all. This year, tinyBuild has created an Xbox One port for their flagship game No Time To Explain. When a heavily armed action hero bursts into the player’s home and screams, “There’s no time to explain!” He gets snatched by a giant crab claw, and then you know it’s time to throw down. Gameplay consists of using different guns to launch your animated avatars across a hostile landscape while blasting away at ridiculously huge boss battles. Fans of Alien Hominid and The Binding of Isaac will appreciate the game’s squiggly-lined animation, and fans of masochistic platformers like Super Meat Boy will appreciate the challenge of navigating through zillions of spike-lined surfaces.

Management sims usually revolve around the creation of a city or theme park—something that is generally soulless. Indie developer Lazy Bear has taken that dynamic and applied it to the story of a down-and-out boxer who has to work his ass off fighting biker gangs and mutant alligators in order to join the exclusive Punch Club. I don’t use the term “work his ass off” lightly here—the player has to manage the protagonist’s workout schedule and find odd jobs to pay the bills on the road to underground boxing glory. The outcome in each combat scenario depends on how well you select the moves that fit into your fighter’s arsenal. As you progress, more impressive moves like the tail swipe (note: your character has no tail) can be incorporated into the mix. There was something about the bleak tone of Punch Club that resonated with me—it felt like a video game version of Darren Aronofsky’s The Wrestler. With mutant alligators.

When I started Party Hard, I assumed that the point of the game would be to see how hard one could party. I was surprised to find that the player’s motivation was in fact far more malevolent. The goal of Party Hard is attend a house party and murder everyone in attendance without them getting wise to your psychotic plan. The 8-bit graphics and creative methods of dispatching partygoers made this game strangely addictive. Despite the depraved concept, Party Hard is an exercise in patience and cunning—plus, your character has some pretty epic dance moves.

When Dark Souls debuted in 2011, it changed the way we looked at third person hack-and-slash games—mainly because it kicked our asses. Since then, the franchise has become a favorite among RPG fans, mainly because each downed enemy makes you feel like an elemental badass. The third game in the series looks to be even more ambitious than its predecessors. Scheduled for release in early 2016, Dark Souls 3 is looking to take full advantage of the current-gen consoles. During the lengthy demonstration that Bandai Namco provided, we were able to see exactly how that would look. Watching the Lord of Cinders navigate through a gigantic, collapsing castle offered an impressive view at the more expansive environment that Dark Souls 3 was aiming to capture. The combat system has retained its complexity—we got to see how to properly use three weapon sets, thought I was hoping to see how our anti-hero would fare against the terrifying dragon that arrived to burn the shit out of everything.
While the dragon remained frustratingly alive, there was a moment during combat that piqued my interest. During a melee with a group of low-level zombies, one of the walking corpses burst open with dark energy as a writhing, Lovecraftian horror emerged from its broken form. According to the developers, this is something that can happen during any given encounter—something that’s sure to keep the player’s blood pressure nice and high. Fans of the series will definitely want to add this to their collection, and for those who haven’t quite gotten on the Dark Souls wagon, the third installment offers plenty of reasons to hop on.

After today, I felt like I had been let in on a few juicy secrets. The upcoming work from tinyBuild has great potential, and being among the first to see the Dark Souls franchise venture into strictly current-gen territory was enough for me to gawk at the apocalyptic beauty that the developers were able to achieve. In my time venturing the halls of E3 today, I discovered a plethora of games that were previously unknown to me—and now I must have them all.
Photos: