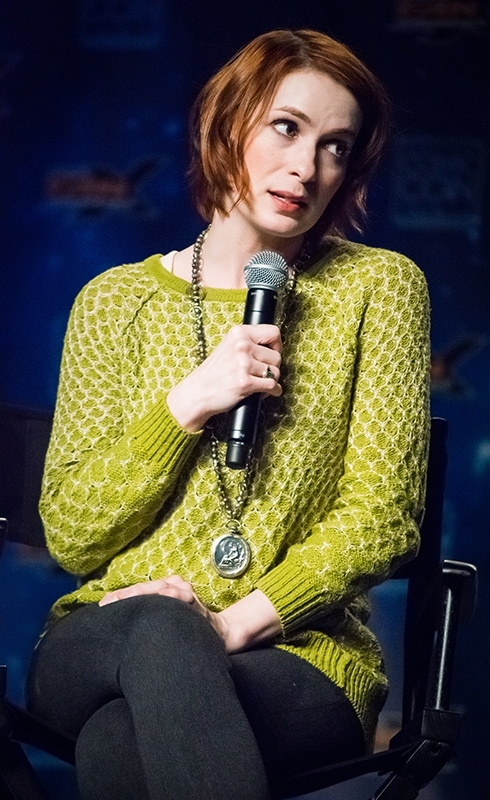 For my first convention attendance I’ve experienced some nerve racking situations I never thought would ultimately be my demise in front of several hundred people. Well, ok, just the one situation. It just so happened to go down as I approached the stage to ask Felicia Day my long brewed question about one of her latest projects—an animated film for the comic series CHEW by John Layman. The experience leading up to the microphone was perhaps the worst part. Waiting in front of hundreds of people, knowing in a few moments I was about to be a giant head on a projector screen while Fan X Staff and volunteers rush about me, reading me rules, asking what me questions I’ll be asking, it was awful. What really shook me though was what happened after 10 minutes of calming my self down and gaining some measure of confidence. As I stepped up to the microphone and started to speak, the volunteer SCOLDED me!

After being shaken up by this, I of course had to explain my predicament to Day, “Oh no,” she started, “now its just awkward, well don’t worry, you’re lovely.” Thankfully, she’s tremendously familiar with uncomfortable audience members and pushed us past the incident straight into answering my question. She explained how her role of voicing Amelia Mintz, developed from her relationship with Layman and their mutual fandom for one another. She said “John Layman is actually a huge World Of Warcraft fan, whenever new things come out I send them to him and he would always send me signed copies of CHEW. I was approached by the people who auctioned the rights for an animated feature, to play the girlfriend role. Well she’s blond, and I’ve never played blond, I really wanted to wheelhouse as an actress and stretch my wings in a new roles,” said Day

Day’s breezy conservative flow with each audience member created a more engaging atmosphere. Despite talking to a packed auditorium, she managed to make the event feel personable, more one-on-one in demeanor. This was partially because her spotlight didn’t have a moderator. She spoke to the audience alone, with no middleman to interject unneeded comments.

Her own commentary on real-life observations speckled the hour, my personal favorite being her reflection on the SnapChat App. She confessed, “Its so weird, it seems to be only for naughty pictures. What else is the point in creating something that will self-destruct? I’m either a spy, and I’m sending coded messages that will self destruct in thirty seconds pause- OR a picture of my boobs.” Day also spoke of the upcoming release of her book, “You’re Never Weird on the Internet (Almost),” which is releasing in August of this year. She said the book signing tour will be based on the areas which most reserved her book, so come on Salt Lake, lets get her back here again soon.