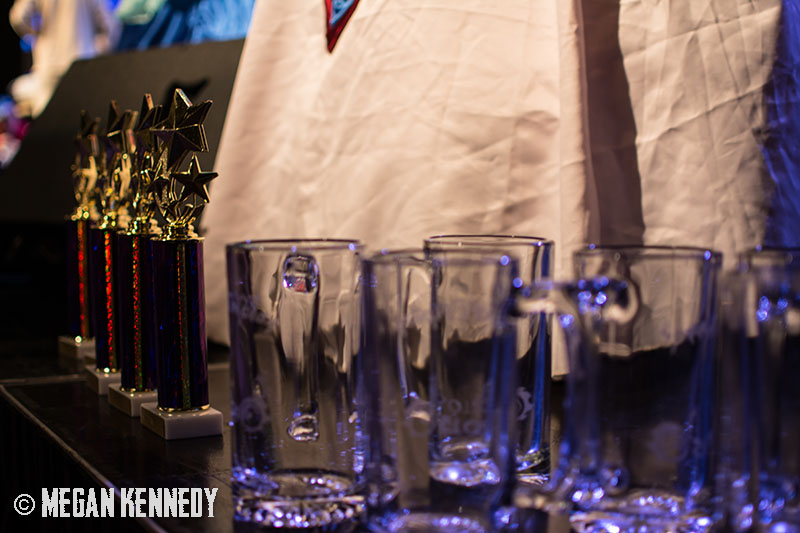 How I Won Anime Prom

I walked into the formal dance at Anime Banzai expecting to mill about for a half hour or so and come out with an impression of the event decent enough to merit an article. Almost two hours later, my friend and I were on stage, crowned and bewildered.

In true Banzai fashion, the line for Anime Prom stretched down one hallway and wrapped around itself, filling the cramped corridor with a sea of people in various states of fancy dress. The dance was slated to start at 9:00, but in keeping with more Banzai traditions, doors didn’t open until about 20 minutes after they were supposed to. My friend Kate and I were cosplaying as characters from the Tales series, and slipped into line a few minutes after 9:00, so we were on our feet for a little while, with not much opportunity for rest after an already full day at the convention.

Once we got inside Anime Prom, our eyes had to adjust a bit to the dim light of electric chandeliers. For a formal, it was an odd choice to keep the lighting dim for the entirety of the dance. There was a table with jugs for water and plastic cups, but the massive hall’s one trashcan was difficult to locate. Music was from a variety of different JRPG, with few tracks that we could actually dance to. Kate and I headed off to a side of the hall and started people-watching. Everyone looked fantastic, a wide variety of traditional formal attire and specific character cosplays on display. About three minutes after we got in, an announcer got on stage to tell us that there would be royalty at this event. A King and Queen couple would be crowned, as well as a Prince and Princess. Kate and I joked that we were “going to win prom.” We made a half-hearted attempt at dancing to Final Fantasy VIII’s “Waltz for the Moon,” made hilarious by the fact that neither of us knew how to dance. We went on a circuit of the room, pointing out intricate dresses to one another and trying to pin down an event coordinator so we could figure out when the royalty crowning would happen. After a brief exchange with the hostess, we left the event hall to get some air until 10:30, the planned coronation time.

We came back in with around ten minutes to spare, having reached the conclusion that the coronation was probably rigged in order to facilitate some happy geek couple’s proposal. Imagine our surprise three minutes later as the hostess comes up to us and tells us to go wait by the stage because we’ve been selected as royalty members (though she wouldn’t tell us which ones). Kate and I can’t contain our laughter as we make our way to the front of the hall, because holy shit we might be winning prom. Music continues for a few more tracks and then the hostess signals for a stop.

“Would the people I talked to earlier please come up on stage? We’re ready to crown our royalty!” Scattered applause echoes as Kate and I climb up one side of the stage while the two other royalty nominees climb the other. One of them is a smartly dressed young man in a white military uniform with a blue wig and shiny rapier, the other is in a dress inspired by the Queen of Hearts. Kate and I are excited as hell because that was our favorite dress of the evening. The level of detail was staggering, and the overall impact of the outfit left us hoping that its wearer would win at least a judge’s choice award.

The first title to be given was Princess. The hostess walked past me and Kate to the other end of the stage, crowning the Queen of Hearts. This is the exact point where Kate and I lost our shit because HOLY SHIT WE WON ANIME PROM. The Prince gets crowned and then we’re announced as the King and Queen of the formal. We got fancy engraved wine glasses; we got to keep the fancy crowns; and we got to dance together in front of everybody while stifling our laughter. All told, an enjoyable experience that started off shaky but ended with a whirlwind of confusion and spotlights. Here’s hoping the rest of the con keeps me on my toes.