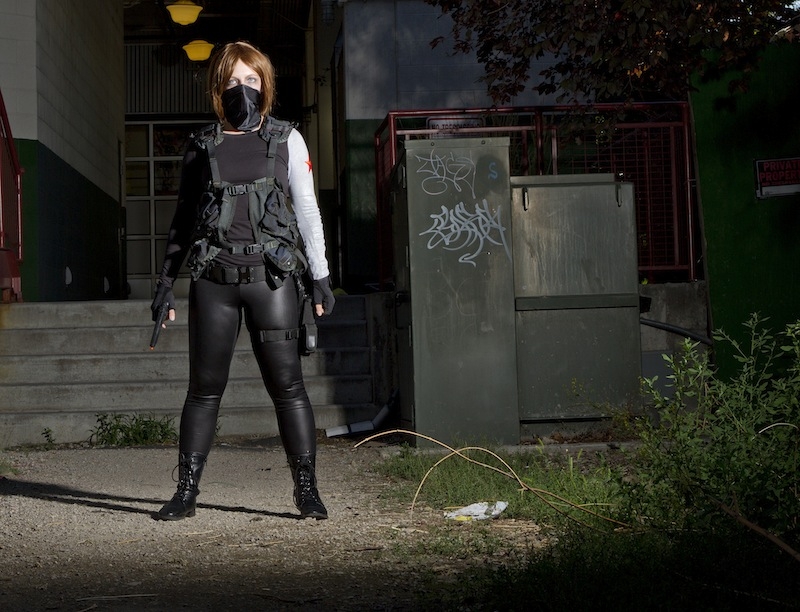 So, you want to cosplay at Comic Con this year. Awesome! I appreciate anyone who takes the time and effort to go beyond putting on a geek T-shirt and calling it good. I’ve got a couple of tips to help get you started.
1. Pick a character you love.
One of the first cosplays I ever made was Batman-oriented. Unfortunately, I absolutely hate Batman. I was able to put the costume together with stuff I had from roller derby outfits and a top I found at Plato’s Closet (see Tip 4), but I didn’t like it, so I didn’t feel confident wearing it. This year, since I picked a character I am so in love with, I couldn’t wait to build upon my concept: The Winter Soldier from Captain America 2. I was especially excited for Cap 2 because I had actually read the comics that the movie was based on, so I felt like I could do the character justice and feel proud to don this costume. I also wanted to pick a 2014 Marvel movie character that not many other people would think to do. He’s a character with history and an awesome future, so if I could get people’s attention, maybe he would be better appreciated in future Marvel films.
2. Time, money, skill: Pick two.
Sorry, you can only have two unless you’re a professional cosplayer and it’s your day job to build costumes. We’re busy people, and not everyone has the talent to sew two pieces of cloth together (seriously, have you tried to use a sewing machine?). You can have all the time in the world and the budget, but you can’t have the expert skill. You can be like me and have skill (kinda) and money (iffy), but practically no time. Ideas in my head—like building a functional foam arm and making it look robotic—don’t match the tools and skills that I have. I got overwhelmed and mad that I couldn’t create the awesome, exact movie replica I wanted to make and wanted to throw in the towel because IF I CAN’T MAKE IT PERFECTLY, WHY MAKE IT AT ALL? But, luckily, that takes us to Tip 3 …
3. Allow for creativity.
The whole point of cosplay is creativity. You can take whatever character you want and tailor it to be as unique and special as you are. I’ve seen some outrageous takes on characters that turned out to be spectacular and left me wondering why I didn’t think of it first (like steampunk Princess Bubblegum from Adventure Time). But don’t get so wacky that you wind up explaining your costume to everyone over and over again (like Victorian crossplay Winchester brothers gowns from Supernatural). Seriously, though, it’s OK to get weird with your costume. It’s OK to play different genders. Hell, I encourage it, as you can tell with my female-costume version of a male villain—I felt like my costume was more unique because I switched its gender. There is nothing more inspiring than a woman creating a femme version of a male character and owning it.
4. Look in your closet. Closet Cosplay.
Totally a thing. Are you a redhead? Throw on jeans, a white shirt and red jacket and you’ll get “Cool Futurama Fry costume!” from people on the con floor. For my costume, I already owned pants, a black shirt, fabric and combat boots. I just needed paint, an iron-on star and military-looking stuff. I had to venture to the mystical land of the army/navy surplus store. (You guys, I was so out of place, I don’t know how I made it out without enlisting or getting a hunting license.) I was able to get the wig on Amazon, which I totally recommend for everything because they have everything, and for decent prices, too. However, why spend more money than you have to when you already own the things you’ll need?
5. Ask for help.
Seriously. I know jack shit about sewing, but I needed my painted sleeve attached to my black shirt. Luckily, I have friends who can sew and a mom who is surprisingly all about this cosplay thing. Don’t be afraid to ask for help. Ask to borrow stuff, like I did with the airsoft gun and black gloves. Or steal it. Your friend won’t notice it went missing until you’re already parading around Comic Con.
6. OWN IT.
You built this goddamn piece of art. Wear it proudly! If you feel awesome in your costume, that confidence will ooze from you and boost your appeal. I guarantee, even if it’s the most half-assed costume in the convention, people will stop to photograph you. You spent more time and effort on a thing than they did, and you are able to wear it to this awesome place! Of course they want to take your photo. They want to be you. As The Winter Soldier, I feel so amazingly assassin-y that I don’t want to take off the costume. Side effects of cosplay include: boosted ego, feeling glamourous and/or badass, extended posing, admiration and straight-up awesomeness.
Go on, build that cosplay. Don’t feel overwhelmed. Once you get onto that convention floor, you’ll realize that all the blood, sweat, and tears were worth it.
BONUS: Do a photoshoot with a photographer who makes you look way more badass than you actually are (Thanks, Matt!).
Photos: