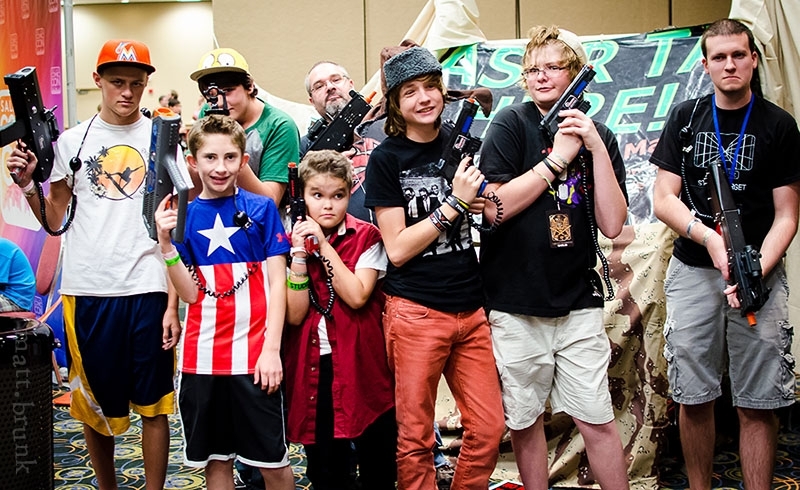 Gearing up as a family to do what we do best… kill zombies! (Photo: Matt Brunk)
Jeanie Burdie and her family take the looming threat of a zombie apocalypse seriously.  So seriously, in fact, that they founded Battlefield Live, a mobile laser tag arena dedicated to helping civilians deal with the living dead.  At Salt Lake Comic Con, the organizers converted one of the larger meeting rooms into a darkened zombie nightmare, with four stages of terror that became progressively more difficult.  Before entering, I was offered a wide selection of weapons—from a light pistol to a giant machine gun.  According to Burdie, your choice of weapon is crucial to your survival.  Despite the fact that they were only firing infrared lasers, each gun has been modified with a specific number of rounds along with varying lengths of reload time.  The biggest gun, for example, also has the longest reload time.  I picked out a smaller uzi, since the three-second reload time appealed to me.
Once inside, the zombies—generously donated by Utah’s own Fear Factory—w ere immediately upon me and my team.  In keeping with tradition, each zombie could only be killed by shooting it in the head a few times, and if it got close enough to a player, the sensors would start tallying up damage points—it was possible to get killed and be disqualified during the battle.  Even though it’s zombie-killing 101 to check those corners, I did manage to let one zombie get behind me.  While he scared the living crap out of me, my reflexes were sharp enough to bring the drooling beast down.  At the end of the experience, we suffered zero casualties and racked up about ten dead ghouls, which wasn’t a bad run at all.
I’ve been to a lot of haunted houses—I think Utah has some of the best—but there’s something extremely liberating about being able to shoot at the freaks that are trying to jump out and scare you. I’d totally recommend checking out Battlefield Live should it ever roll through Salt Lake again.