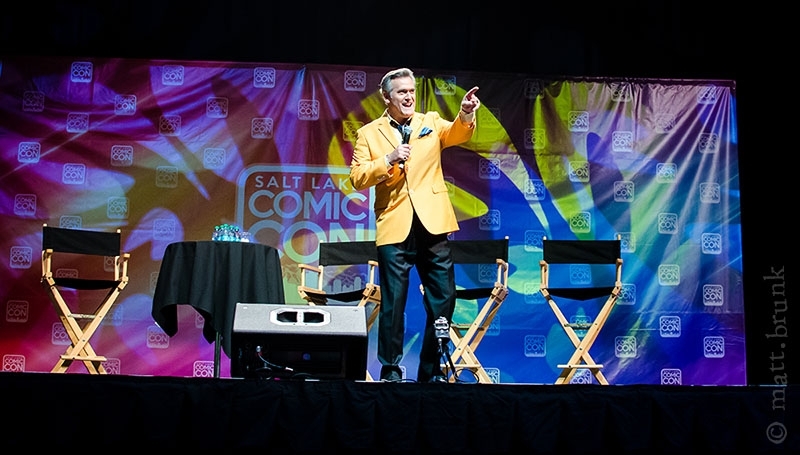 Campbell has built a solid repertoire of film and television appearances that rate pretty highly on any self-respecting nerd’s geek-o-meter. Photo: Matt Brunk

Even at 56 years old, Bruce Campbell still has one of the best chins in the business. Though my heart will always belong to Ash Williams from the Evil Dead Trilogy, Campbell has built a solid repertoire of film and television appearances that rate pretty highly on any self-respecting nerd’s geek-o-meter.

On day two of Salt Lake Comic Con, the B-movie rock star commanded a full crowd in the convention center’s largest ballroom—despite being a bit late due to his previously scheduled photo op. When he arrived, clad in an orange dreamsicle of a blazer, I was expecting yet another lengthy Q&A session between him and a line of fans. I was pleasantly surprised to see him mix things up a bit by probing the crowd for attendees who possessed a certain skill and bringing them up on stage for an impromptu performance.

Not only did this give him plenty of ground to offer up his endless barrage of snarky witticisms, but it allowed a few touching moments to take place between Campbell and his fans—including a marriage proposal—which beat the hell out of listening to someone ask about Evil Dead 4 for the billionth time.

This man is nothing short of a legend in my book—go watch Bubba Ho-Tep if you don’t know what I’m talking about—but I have to admit that his whole “Utah is lame and full of polygamists” schtick felt a bit dated. It’s 2014, after all. We’ve got a whole bunch of new crap for celebrities to make fun of.