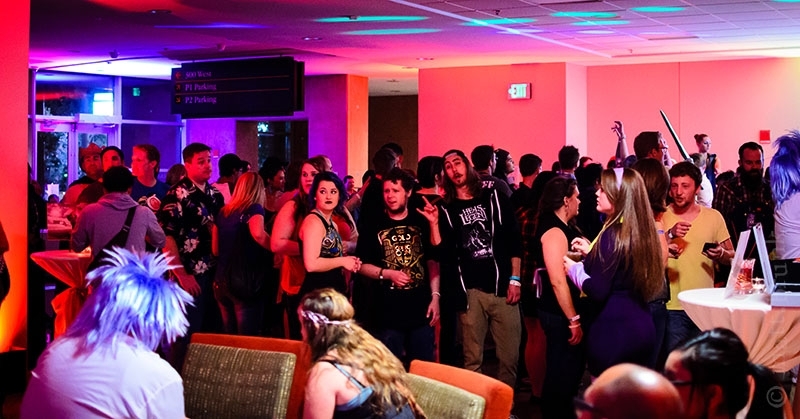 What do you get when you cross Salt Lake Comic Con with loud music, packed crowds, elaborate costumes? Well, uh, more Comic Con, except this time with a full bar. The general attendance side of the affair was well-attended and enjoyable, the bar was indeed full and my whiskey and coke was much-appreciated. DJ Jarvicious traded off with the live performers, the Amplifly Aerial Band, so there was always some sort of music playing. The dance floor was well-attended, and I saw a Jedi do the splits after dancing with his lightsaber, and an extremely uncharacteristic Consuela from Family Guy bust some serious moves with a wide grin on her face. I also stopped by the Photo Collective photobooth and let them take some snapshots of my exquisite beard form, so keep an eye out on their webpage for the SLCC Bash gallery.
So what does a $100 VIP  get you? Not fucking much. Simple (although tasty) catering, the opportunity to pay for all your own drinks (even water isn’t free), and the opportunity to hang out with people who may or may not be celebrities because none of the recognizable ones decided to show up. With the exceptions of extremely brief appearances by Patrick Warburton, Danny Glover and Grant Imahara, good luck recognizing any of the other obscure D-list celebrities bored enough to slink out of their hotel rooms.
Look, it’s great that any celebrities came at all, but if you were paying that excessive amount of money on top of your Comic Con tickets hoping to see your favorite celebrities up close, you were gambling and you lost. Fuck that, I’ll save the extra money for a six-pack and a pizza at a fraction of that ludicrous cost. It’s a completely excessive money grab on top of the already completely excessive money grab that represents a significant amount of the Comic Con experience. Zero out of ten, would not recommend. Stick to the general attendance side, it’s cheaper and more fun – Consuela approved!