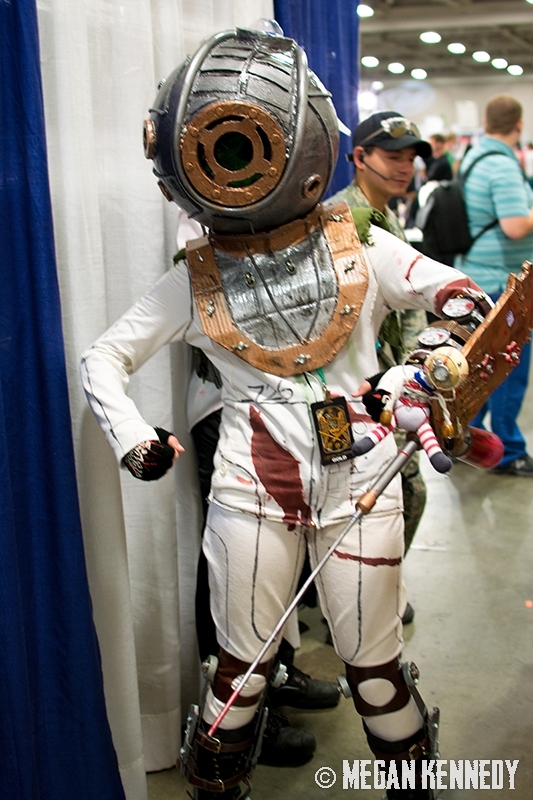 A great Little Sister cosplay from Bioshock. Photo by Megan Kennedy (abuseofreason.com)
Here’s something fairly exclusive to the 21st century – professional cosplayers. These are folks, mostly women, whose whole livelihood is based on dressing up as comic book, movie, TV, cartoon, and video game characters, and showing up at events like Comic Con. The most renowned cosplayers, like Jessica Nigri, make thousands of dollars off of things like photo ops and picture signings at every event. But she wasn’t always so successful; at first she did cosplay because she enjoyed being part of that culture…that world.
In fact, most cosplayers don’t make a net dime off of their hobby. Often, these people will spend a significant amount of time and money cooking up a great costume to wear at these conventions. Why?
“It’s like a big party,” said Daniel Gray, a young Utah County man who’s dressed up as Deadshot from the TV Series Arrow, “I’m not immersed necessarily in it but I love comics and it’s fun.”
I’m sitting with Gray, and his two friends and fellow cosplayers Erick Van Uitert (dressed as Zaheer from Avatar) and Breanna Wiggins (dressed as Scarecrow from Arkham Asylum). The trio had just finished eating what looked like some sort of Chinese food. It was near the end of the evening, and they seemed a bit tired. During our chat, a middle-aged man approached the table and muttered toward Wiggins, “You have too pretty of a face to cover it up.” Strange thing is, he’s probably never seen her face. I ask Wiggins if she thinks it’s weird how people treat female cosplayers at these events.
“I think it’s kind of funny,” said Wiggins, “But I like it, I am used to being picked on because I’m a nerd, here it’s not like that at all. It’s a very welcoming culture.”
The welcoming aspect of cosplay culture, and really the broader nerd culture, can be a real draw. For years, people like Breanna, Erick, and Daniel have had to accept that some of their hobbies and interests will garner them shit from their peers. But with things like comic books, anime, video games, and, yes, cosplay becoming more mainstream, people like them can proudly, and literally, wear their interests; especially at events like Comic Con.