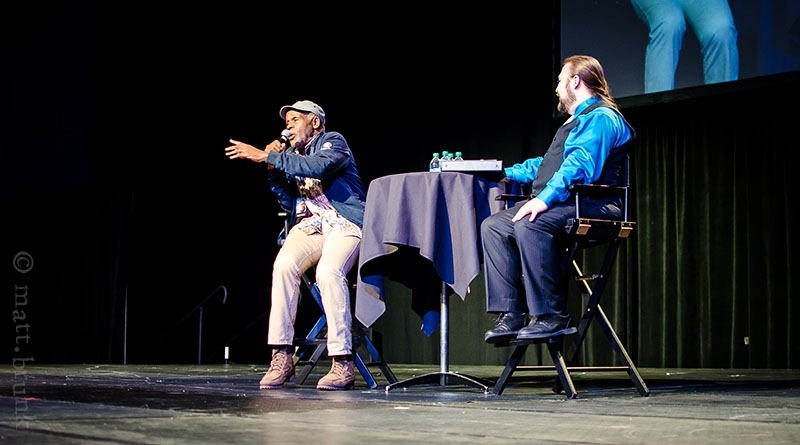 Danny Glover still living the dream after all of these years. Photo: Matt Brunk

By Blake Leszczynski
While people were losing their minds over the weekend’s keynote guest, Mr. Stan Lee, next door, a half-full North Ballroom was being treated to a panel with one of the great actors of the last generation. Of course, I’m referring to Danny Glover.
Over the hour-long panel, Glover, 68 years old, packed in stories about his parents involvement in the civil rights movement, his own civil rights involvements (notably his work in South Africa), his stage career, and the choices he made that lead to be the icon he is today.
“I was doing a play in New York City, and I had no understudy, and my agent called saying he had a series for me,” Glover said after being asked about the best and worst decisions he has made in his career, “I told him I couldn’t…the series ended up being Hill Street Blues.” Glover went on to say that, because he was in that play, Robert Benton saw one of the performances, which lead to him being cast as Moze in Places in the Heart.
The highlight of the panel is when Glover talked about the first time his grandmother saw The Color Purple. Of course, Glover’s character, Albert, is about as notorious as they get. “I was visiting my grandmother, who was 92, and everyone was coming over and taking pictures of me,” said Glover, “My grandmother [didn’t know what was going on] and said ‘boy, you must be some kinda important.’” Glover’s family showed his grandmother the film and, “She came out of that room and said, ‘Boy I taught you better than that, go get me a switch.’”
Glover’s departed some great wisdom when he was asked for advice for actors. His words could definitely be applied to so much more than acting. “Believe what you do has value,” said Glover, “And then do what you do based on that value.”
By Megan KennedyAlright, here’s the thing, Danny Glover is “getting too old for this shit.” Yes, that question was asked, because it’s the most obvious question. It’s also one of the only questions asked about his role in Lethal Weapon. Poor Glover must hear that question every time he ventures out of his house, he humored the crowd and told us he wasn’t—but he’s kind of become the cute, old grandpa that tells stories that could go on for hours. The stories aren’t always interesting, but you need to sit and listen to be polite. He talked about his family and how he comes from a strong activism background. His parents and grandparents were highly involved in the community and the civil rights movement and it’s a huge part of how he got to be where he is. The best story is about his grandmother, right around the time The Color Purple came out on VHS tape. Glover went down to Georgia to visit his grandparents there and all of the neighbors and friends took pictures and got Glover’s autograph. His grandma mused that he, “must be some kind of important.” Glover laughed, and assured her that he wasn’t nearly as important as she was.This was before she saw the movie, after, she wanted to “take a switch after that boy.” It was such an adorable story. After the family stories, he was asked what movie would he recommend to change cultural thinking—he recommends Grand Canyon highly, which is on Netflix. The audience did get a few questions in, the most useful of which is about his acting methods. He suggests that you find a way to immerse yourself completely in your role, actively listen to everyone around you, less is more, value everything you do as a person or an artist, and dedicate your performances someone or something. Glover has just finished filming a movie here with a local production company called Waffle Street. It’s good to know that he isn’t too old for acting just yet.