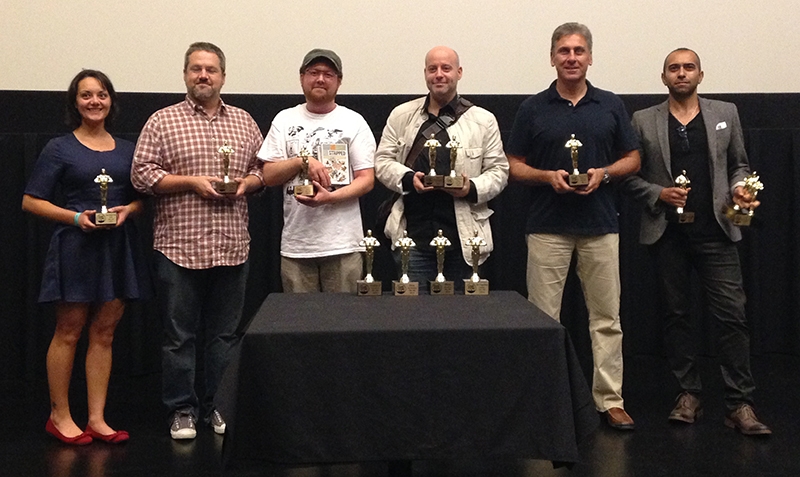 Presenting thr winners from thsi year’s 2014 Comc Con Film Festival (Photo: Alex Springer)
For folks who wanted to get away from the hustle and bustle of Comic Con and sit in the dark for eight to ten hours, the Salt Lake Comic Con Film Festival was up and running at the Gateway Megaplex all three days of the convention.  In keeping with the spirit of Comic Con, submissions were primarily based around geek-friendly concepts like science fiction and superhero comedies.  Among them were even a few fan films that explored the worlds of Gene Roddenberry’s Star Trek and Robert Jordan’s Wheel of Time books.
I’ve got a lot of respect for independent filmmakers at this level.  No matter how limited their resources become, their enthusiasm for their craft is admirable.  That being said, the films that I happened to screen at this year’s festival were a mite rough around the edges.  Many of them, I’m sure, are still works in progress—most short films are—but I’ve been to a lot of indie film festivals, and the majority of the submissions that I watched here were not exactly up to par.
Saturday evening was perhaps the most successful as far as film quality and patrons in attendance.  Before the awards ceremony, Kevin Sorbo held a screening of one of the two episodes of Hercules: The Legendary Journeys that he directed, followed by a Q&A.  During the awards ceremony, Sohrab Mirmont cleaned up with his film The Freemason, which screened twice at the film festival.
Though independent film should be a mainstay at any good Comic Con, I couldn’t help but feel like this year’s film festival was a bit of an afterthought to the organizers.  The selection process seemed rushed and it wasn’t very well publicized, but at least it offered a cool, dark place in which to relax when life at the convention center got too dicey.