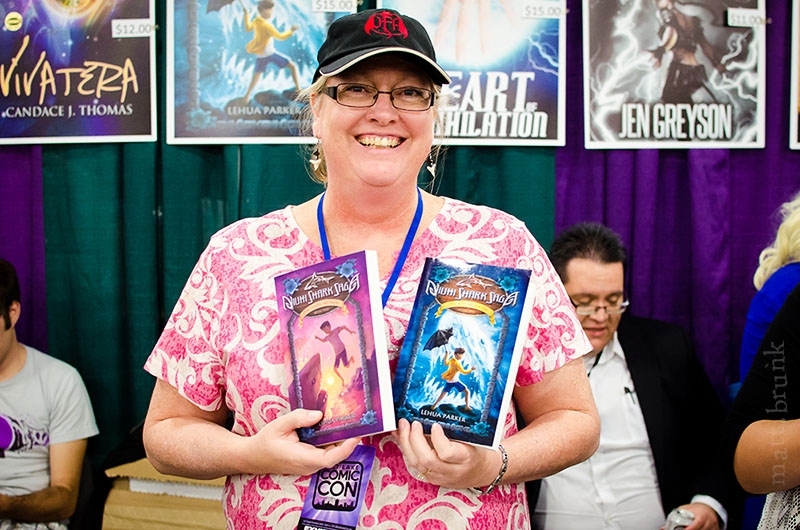 Lehua Parker posing with a couple of her books (Photo: Matt Brunk)

One of the stranger things I’ve seen up to this point at Comic Con is Cary Elwes’ booth. Unlike the rest of the celebrities’ booths, which are open and outward facing, the Princess Bride actor has decided to go with a cordoned off, veil-covered approach. It’s not that I don’t get why he’s doing it, he’s a fairly big star and may not like the attention he would get if the booth was more open—but the whole arrangement situates Mr. Elwes’s booth in such a way that makes what’s within seem more likely an oracle, or the Bearded Lady rather than the London born actor who stole all of our hearts as Westley.

A tad more approachable feature at this year’s Con is the Utah Fantasy Authors Book Store—which, as you may have guessed, spotlights a number of local authors and their works. The signs at the large booth urge people to “Please Touch” the books, as well as “Pick up and read the back cover.” Within the booth, which has been set up to resemble a book store, are a half dozen or so Utah authors chatting, with anyone who comes near, about the books that they’ve written.

“We’re better at selling the other writers’ books than our own,” said Lehua Parker. “People don’t want to hear every detail, and that’s what we do when we talk about our books.”

Parker is the author of the Niuhi Shark Saga, a Hawaiian-centric fantasy series written for middle school children. As I sauntered toward the local fantasy author booth she and fellow author C.R. Asay quickly appeared to answer any questions that I had.

“We decided to do more of a bookstore thing, rather than have a bunch of authors sitting alone at a booth,” said Asay, “It’s been really good so far.”

Asay, who just released her first novel this past month, entitled Heart of Annihilation, and Parker, are part of something of a new breed of female fantasy writers who are looking to follow the path of authors like J.K. Rowling, Suzanne Collins, and Stephanie Meyer.

“I don’t think of it in [male author vs. female author] terms,” said Parker. “This has always been a very vibrant and supportive community.” Asay added, “Utah women, in particular, are generally strong. We know we can write good stories and characters and we’ve come out swinging.”

To find out more about the local fantasy authors at Comic Con this weekend, go to sharkbaitbooks.com and download a free eBook sampler, which features all of the authors.