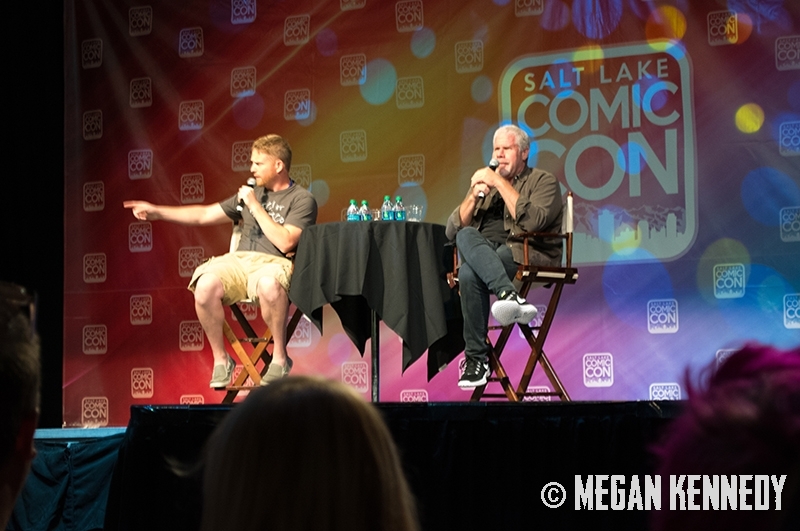 Ron Perlman was a foul-mouthed, hilarious delight at his panel. Photo by Megan Kennedy (abuseofreason.com)

I was so thrilled when veteran character actor Ron Perlman got added to the SLCC guest list right before the Con opened. I’ve been a fan of his smooth baritone voice and charm since I was a kid, watching him alongside Linda Hamilton in Beauty and the Beast. He’s had such an eclectic collection of voice and screen work, including his most famous roles as conflicted superhero Hellboy and ruthless biker king Clay Morrow in Sons of Anarchy, that I didn’t know what to expect from him as a person in a panel session. Turns out, the dude is just a stone cold badass on every level. (He did the “war never changes” line from Fallout for us—swoon!)

We got some incredibly charming anecdotes from Perlman as the audience lined up to ask him questions, and he displayed a deeply inherent talent for comedy. One young man in a Spidey costume got up and began by saying his name was Will, to which Perlman replied, “No, it’s not. Don’t you bullshit me, it’s Peter.” After the audience laughter died, Will let out a perfectly awkward and deadpan “Anyway… ,” which sent the audience and Perlman into another round of hysterics, it was fantastic. Audience members asked some great questions, pressing Perlman about the likelihood of a Hellboy 3 movie, about his transitions from voice to screen acting, and his relationships with the many actors he’s worked with in his career. Perlman expressed great affection for the Hellboy mythos and said he felt an “obligation” to finish the trilogy and to answer the moral dilemma of Hellboy as he tries to decide who he is and where he belongs, and that he would continue to push to get the movie made. When asked about how he chooses his projects, Perlman said he is attracted to characters whom he finds accessible as an actor, and to script originality, which certainly counts for the plethora of crazy-interesting roles he’s taken. He described the difference for him between voice and screen work, describing the former as more “primal and instinctive,” where he is simply given a script and hits the ground running, forcing him to immediately jump into the emotional mindset of the character. And he talked about the powerful intimacy between actors on a project, who must present to each other full vulnerability and “nakedness” take after take. His stories were the perfect mix of humor and depth, and I walked away with even more respect than I already held for Perlman, who seems like a solid, down-to-earth guy who genuinely loves his craft.