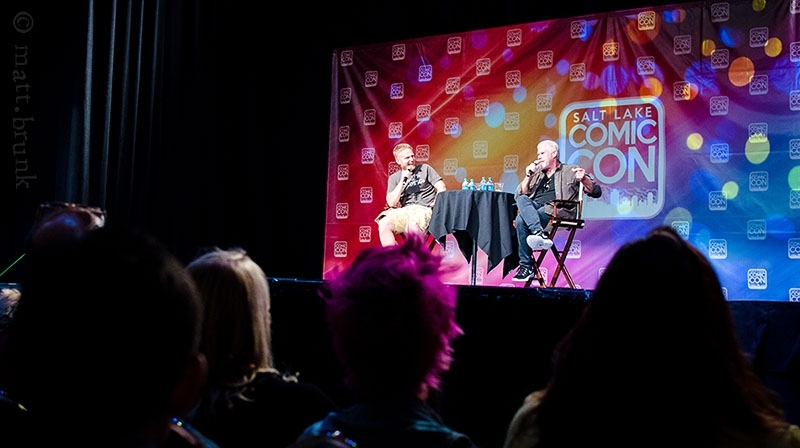 It didn’t take long for Perlman to answer the question every Hellboy fan has. "I think it’s an obligation for us to finish the trilogy.” Photo: Matt Brunk

After some obligatory meetings and moneymaking at the place that pays my bills, I rushed back to the hallowed grounds of the Calvin L. Rampton Salt Palace Convention Center (so named, since 2007, after the 11th Governor of this fair state which, of course, for this weekend, is the Mecca of all Utah nerd-dom: Salt Lake Comic Con.

Outside the edifice was a mass of people waiting to get in. With only about 3 hours left in the day, they seemed eager. I snapped a quick pic of these poor souls and slipped into one of the convention’s numerous side doors.

Walking into Salt Lake Comic Con is like walking into some strange dream that you’re not quite sure you want to be in. It is a vaudevillian variety of freaks, geeks, the extravagantly costumed and the scantily clad. All manner of spandex and face paint, for as far as the eye can see, overtakes your senses to the point that it all becomes, for at least the moments you are there, your new normal.

Once I adjusted, I noticed a throng of people pouring into a ballroom. I joined them. Walking to find a chair, I inquired toward a fellow con-goer as to who was featured in this particular panel. “Ron Paul,” she replied confidently. That seemed unlikely, but I was intrigued. I wandered toward the front, where a group of middle-aged ladies, toward the front of the room, invited me to join them. These ladies, who were obviously more in the know, informed me that it was Ron Perlman of Hellboy fame being featured, rather than Ron Paul of libertarian and conspiracy theory fame, who was to be featured.

Perlman joined X96’s Richie T onstage not too long after I got comfortable, and from the get-go he was absolutely in his element. In response to Richie’s first question asking why he goes to events like Comic Con, “Just to get out of the house,” Perlman said. “My wife asks me to do a bunch of shit if I’m at home.”

It didn’t take long for Perlman to answer the question every Hellboy fan has. “When we wrapped Hellboy 2, we all promised that we’d never film another,” Perlman said in response to a question posed from a panel audience member, “but after clearing my head, taking some medication, I think it’s an obligation for us to finish the trilogy.” The crowd erupted.

Perlman comfortably moved from question to question, most of them being excellent—a real credit to the crowd, rarely dodging anything. What we learned: he wants to work with Kevin McKidd again; he treasures his experience on The Beauty and The Beast series; Linda Hamilton was his favorite onscreen kiss; and Ice Pirates 2? “Fuck No,” he said.

The hour went by way too fast. Heading out of the ballroom, several attendees were buzzing about the incredibly likeable character actor. It was a fantastic start to what should be a memorable weekend.