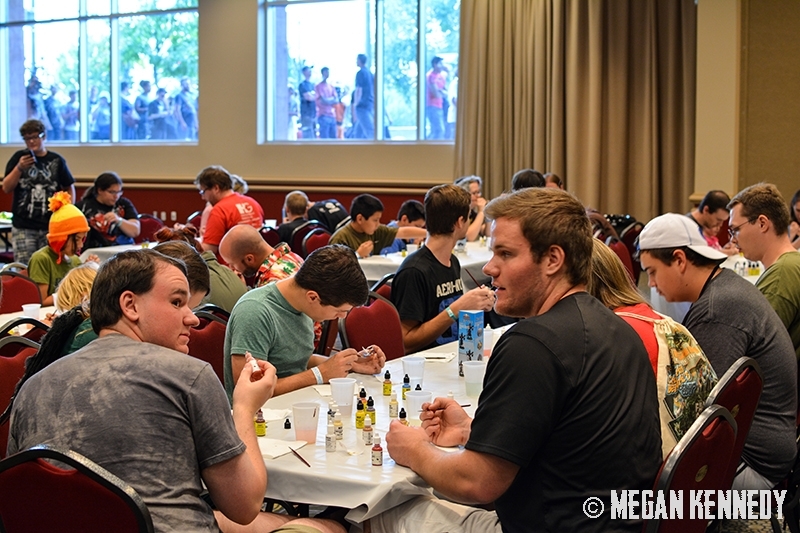 Day two of the Reaper Paint & Take booth was a whole different animal than Friday’s slow trickle of interested novices. As I made my way into the Gaming Room, I was surprised to see that virtually every table for painting was full, with a short line of people waiting at the booth to participate. Bryan Stiltz, one of the owning partners of Reaper Miniatures, was circulating through the tables, watching the budding handiwork of Comic Con’s diverse attendees.

Stiltz has been with the company for 12 years and, much like his wife Shannon, he got his start in the Reaper HQ mail room. While he was there, he kept finding and rejecting badly sculpted miniatures, casting them aside rather than letting them be shipped to the customer in the malformed state. Over time, the management decided he was doing a better job than their current Quality Control team, and they gave him the first promotion of many that would lead to his current position.

He says that his current work as one of the eight partners who own Reaper goes beyond simple administration. “I work in IT on Kickstarter projects,” he says, which is particularly interesting due to the company’s recent Kickstarter campaigns to release waves one and two of their Bones line of miniatures. “We first started releasing plastics in 2007 as a pre-painted plastics line. That went over well, but it wasn’t the breakaway success we were hoping for. What our fans kept saying was, ‘Well, we would like them unpainted,’” says Stiltz, “It really took us six years, until 2013, when we’d been contacted by a convention to host a Paint & Take. At the time, we had the pewter miniatures, and pewter had just had a price spike. We couldn’t afford it. We thought, ‘What if we gave them the unpainted plastics?’”

The unpainted plastics line that would become Bones was a huge hit, and even in the office, the employees of Reaper got excited about the high quality of the miniatures. The first line of Bones lasted for about four months before selling out completely, so they decided to start a Kickstarter campaign to support it. “At the time it was completed, it was the third highest earning Kickstarter of all time,” he said.

I asked him about Reaper’s more current projects, and he mentioned that they’re currently running a Kickstarter in support of CAV, an older line of giant mechs and war machines that could be used in a tabletop war game. The older pieces had become so expensive, due to the large amount of pewter involved in making them, that they had simply fallen off the market. As of the time I’m writing this, the CAV Kickstarter is already at above 300% of their starting goal, which bodes well for their continued presence on the minis market.

Owning a small Board Gaming business in Salt Lake City is tough work, but Dawn Christensen is clearly up to the task. When I met up with her, she had the concerned look of someone whose hard work was paying off little by little, and you could see that she was pleased by the increased traffic through the Game Room on day two of Comic Con.

She opened the main location of Epic Puzzles & Games in West Valley on August 2, 2008, and has since opened another location in Lehi. In a little more than a week, Christensen says, there will be another store opening in Ephraim. “At the time I decided to open a Board Game store, there were only one or two in the valley, and none of them were on the West side,” she says, “I felt it was pretty tragic, because there were a lot of people who gamed over there – so I thought, ‘Let’s do it and see what happens.’” Of course, what happened was that a number of other Board Game stores saw the success of Epic, and began popping up around the West side. “Four years later, there’s like a million of them,” she says with a smile, “Of course, we’re still the biggest and best.”

Christensen opened Epic as a lone venture, “I worked a lot for three years. My family barely saw me. Now they probably see me too much.” Her interest in board gaming started with her sister’s husband, who first introduced her to euro games like Settlers of Catan and Puerto Rico. After playing them pretty extensively, she started researching new games on her own, budding a strong interest in the medium. “Plus, I won all the time, so why not?”

While opening a Board Game store in a place where nobody has access to one makes sense from a business perspective, Christensen is just as driven by the opportunity to give kids a chance to play board games with their friends without having to drive for two hours. “In Ephraim, it’s right by Snow College, there’s a lot of kids there, and I think it’s tragic that they don’t have anywhere to play a board game. Why not open up there and give them something to do?”

She says that the biggest difficulty she faces is that Utah’s taxes and regulations are much harder on small businesses than they are on the huge megacorps that populate our city. “They are extraordinarily invasive on small businesses. The amount of tax burden that we carry is disproportionate to the amount of revenue that we generate,” says Christensen. We joked that maybe, one day, Epic Puzzles & Games could end up being one of those giant corporations with their buildings rising high above downtown. “That would be awesome,” she said, “I could just show up once a month and buy everybody pizza, and they’d think I was the best boss ever.”