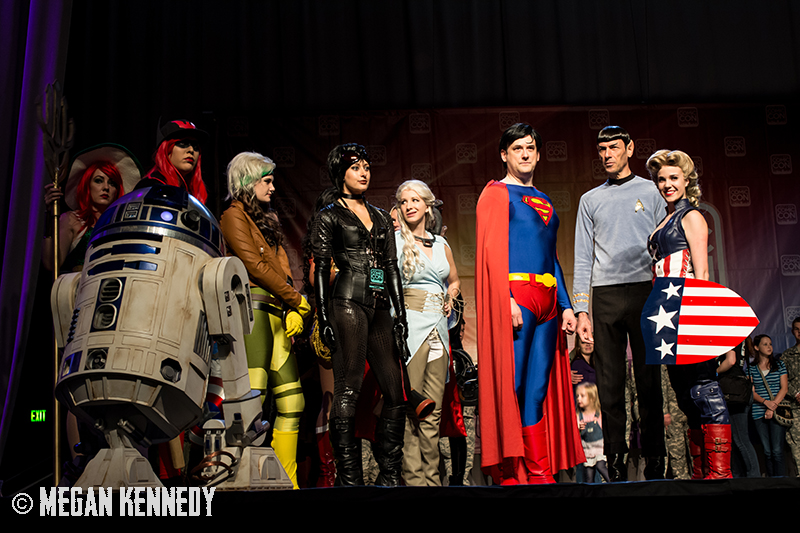 The official press conference for Salt Lake Comic Con 2015 had it all, kicking off an exciting weekend that thousands of fans have been waiting for. SLCC, in its 3rd year, has already destroyed records and expectations—and only has plans to keep this kick-ass train chugging forward. A bunch of heroes were invited onstage, both fiction and non: some of the amazing cosplayers at the con showed off their stuff, alongside a fine group of men and women from the armed forces, law enforcement and first responder professions as well as their families. First, the crowd got warmed up by the introduction of the Animaniacs—or more accurately, their voice actors, Jess Harnell, Tress MacNeille and Rob Paulsen, wishing us a nostalgic “Helloooooo Salt Lake City!” They introduced the main speakers of the event, SLCC co-founders Dan Farr and Bryan Brandenburg, who talked a bit about how amazing the past Cons have been and what they’re planning to do this year to top it. The big record-breaking attempt this year is to gather the largest amount of comic book characters in a single place; currently, the Guinness World record is held by China (which is obviously un-fucking-acceptable, my fellow Americans) and included 1530 participants. This badass attempt—which Salt Lakers should be able to crush into dust—will take place on Friday, and include an official from the Guinness World Records to verify. The duo also spoke about the other milestones the Con has reached, including largest con per capita in the country and 3rd largest con per attendance. They introduced some of the celebrity guests attending the con, including Manu Bennett, Scott Wilson, Dee Bradley Baker, Richard Hatch, and even Ms. America, whose crown looked legitimately hardcore to wear. At the last minute, Marina Sirtis of Star Trek: TNG popped onstage to join her fellow celebrities and invite everyone to attend the Utah Symphony’s performance of classic sci-fi songs this weekend, which she will be narrating. After the co-founders spoke, they invited Attorney General Sean Reyes to say a few words. He took a selfie with the crowd before he talked about the social and economic benefits of the Con for Salt Lake, and had the crowd and the celebrities thank the real heroes onstage—the first responders and soldiers. The conference was short, sweet and to the point: Salt Lake is coming for the top of the geek mountain.