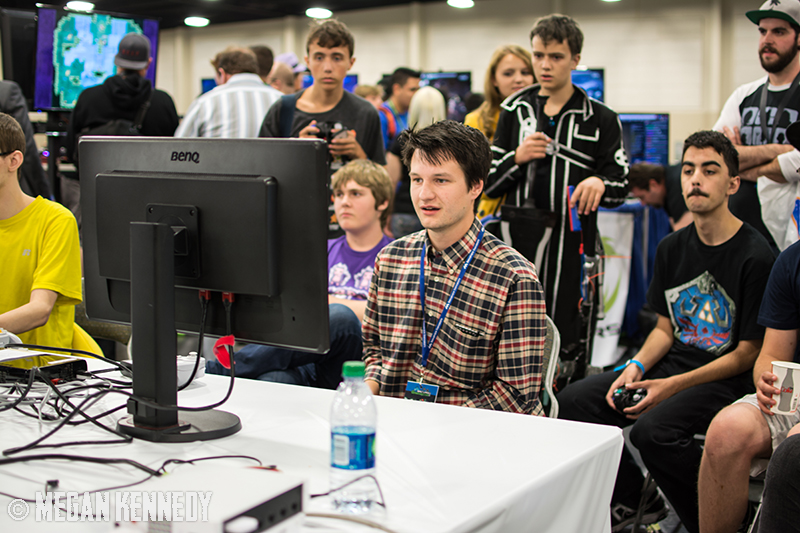 It was at that moment that Barnabas realized that he was, in fact, going to get schooled by a middle-schooler in a Pikachu costume. Photo: Megan Kennedy

The faint smell of sweat lingered in the air as buttons clicked rapidly and anxious onlookers judged each of the players’ meticulously calculated moves. Six rows of four TV screens spread along the right side of the middle walkway in the main hall of the South Towne Expo Center—tournaments ranged from 2v2 Modern Warfare to Wii U Super Smash Bros. This is where the most people stood and watched—tightly clumped together around small screens. It was obvious that if you were a gamer, this was the place to be.

I walked into the hall nervous but confident—I was signed up to play Super Smash Bros. for Wii U. I hadn’t played on the Wii U before, but I was sure that the short-lived time during my childhood playing Smash on the N64 would be enough. I didn’t slow my stride. I wasn’t going to let these vivacious 16 year olds to know my secret. Tim Hansmann, the director of the Smash Tournament, called out my name and pointed to a screen. My opponent was a large Pikachu who went by the name Christian Ford. I wasn’t scared. How tough could someone who had their own limited edition Wii U controller be? I mean, I bet he doesn’t play often, I said to myself, trying to breathe steadily and not reveal to everyone around me that I had no idea how to sync my controller let alone navigate its unfamiliar buttons. However my façade of confidence was broken, and a kind kid behind me graciously helped me out—his blue braces shone boldly from his smile.

I could feel heavy eyes on my small cursor hand as it moved across the screen—apprehensively hovering over the mug shot-esque pictures of the characters. I chose Kirby, which was met by a “Is he really picking that pinky little fucker?” Sigh. Pikachu to my right chose the custom Charizard. It was fitting choice. I looked over at him as the battle was about to begin, he gave me a coy smile as if to say, “I’m going to enjoy this.” Oh, shit, I thought. He smelled my fear, but it was too late to back out now. I decided to make my Kirby green. In the moment it made sense and looked a tad bit more menacing, but while I was being tossed in the air by Charizard like a beach ball at a rave, I just looked like a helpless spinning Google Chrome logo.

It was a double elimination forum and each game consisted of two lives in a best two out of three set. Most lives I died by my own doing (though, all credit to Pikachu, he kicked my ass), but for my skill level on the Wii U, I was playing way too aggressively. The games were over in a flash. I looked to my right to give Pikachu a high five and slip out past the leering crowd, but my attempt at Smash sportsmanship was met by him flexing at me. Mind you, this guy was no older than 16, twig-like arms, dressed like pikachu—consisting of yellow dyed cargo shorts—and this fucker was flexing at me. Though, I guess he deserved it. If this was the wild and Smash was the true test of manhood, I would have definitely been sleeping in the cold and he, victorious, would be spending the night with one of the cosplay princesses.

Even though I lost, it was a lot of fun. Tim Hansmann was nothing but accommodating and cooled my nerves with his not-too-serious sense of humor. The crowd around the game, even though they were loudly judging each move, gave due praise to the winner and kind consolation to the loser. The only problem is that I wish there were more games and larger screens for the tournaments. However, for a first year and the 250 to 1,000 dollar tournament grand prizes… it wasn’t too bad.