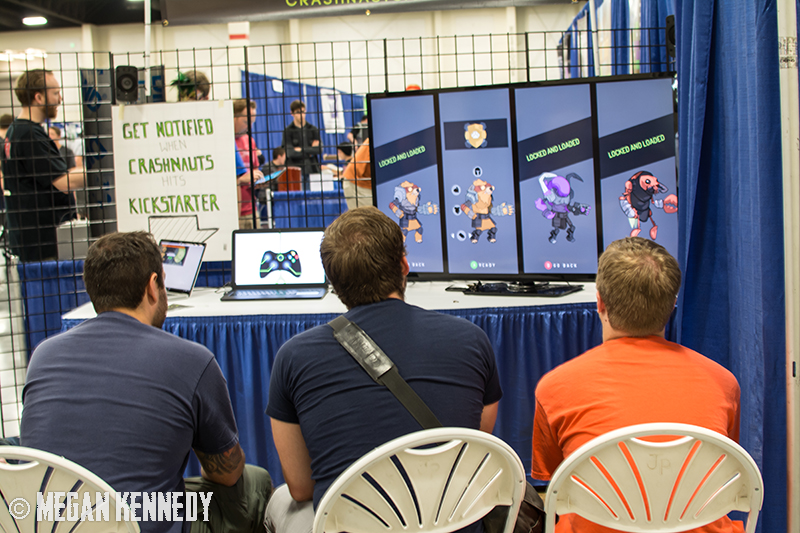 On Friday, I arrived at the South Towne Expo Center just before noon to a pleasant surprise; better structure and a larger turnout lifted my spirits for Salt Lake Gaming Con’s three-day event. Where Thursday was the beta access, Friday felt like something closer to a full release. A few booths, Microsoft being one of them, modified their floor presentation to properly accommodate the interested perusers, and the barebones chaos was a little bit more contained. I got the impression that the staff expected disaster to strike Thursday, but since it never did, they breathed a little easier today. I met up with the SLUG team, Davis Pope and Megan Kennedy, at the day’s first panel, “PC vs Console,” around 2 p.m. We endured the dull debate and moved to the exhibitor floor.

I started the rounds nursing a hot cup of Phoenix Down, connecting with the independent developers in the Utah Games Guild alley and instantly felt at home. Coincidentally, and to my delight, I ran into my aforementioned GEEX Gears of War Tournament teammate Mike Call by complete accident at his studio’s Crashnauts demo booth. On display before me was one of the most adorable slaughter-fests I’ve seen. Four strange animated figures bounced across the television, each lobbing rockets or crash-landing onto their unfortunate prey. Castle Crashers was the first game that came to mind as far as aesthetics, but as Mike accurately describes, it plays like “Smash Bros. with guns.” The game caught my attention immediately, so I sat down to try my hand at the brutality. He explained to me that they drew inspiration from competitive games like Smash Bros. and Unreal Tournament, ultimately designing a more hardcore two-dimensional shooter. It has a special allure to it—simple controls and “okay, one more” gameplay with different intergalactic races (like motherfucking space bears!). Currently playable modes were Free-for-All, Team Deathmatch, and Hold the Flag—something akin to Halo’s Oddball game mode—and two different maps. Upon release, they plan on adding “a campaign-lite” mode, a horde mode—clearly inspired by Gears of War—and unlockable customizations. They plan to launch a Kickstarter campaign in the coming months, with intentions of a PC debut. If it gets the Steam Greenlight treatment (which it absolutely should), they aim to then release Crashnauts on PS4 next, and ideally, even on Xbox One and Wii U, but the details remain hazy. Keep your eyes on this one, people; I definitely am.

Wandering deeper down the indie game rabbit hole, I came across Projectile Entertainment’s Momentum. This physics-based puzzle game has you move an orb to the goal along a labyrinthine track by manipulating the stage itself. Throughout my time with Momentum, I thought back to those progressively infuriating yet entertaining games like Marble Madness and Marble Arena 2 and how much I loved them. The checkpoint system offers a slight safety net to Momentum’s challenging but fair gameplay, but in no way does this make the game easier. I played six of the early stages. Davis approached the game with a more full-throttle mentality, asking for one of the hardest stages. Well, he certainly got his wish: What we soon witnessed was an oscillating cylinder of demise. We certainly lacked the necessary skills to progress much farther than an inch beyond the starting position, but it was still a blast. Kelly Harper, the game’s designer and artist, told me the two-man team started designing the game about two years ago, almost on a lark. The game currently has 55 mind-melting stages with two worlds, but they hope to have 100 stages and three total worlds by their anticipated Winter 2015 release window. They have no plans for console launch yet, but they aren’t ruling it out. I don’t know about everyone else, but I’m excited to scream at my monitor in a laugh-riddled rage playing this game.

From there we went to Davis’ Smash Bros. tournament gamble. He met the same fate as I did in yesterday’s Halo tournament. Afterward, we commiserated his loss over a pint and convention war stories. It was a great opportunity to step back and observe gamers in their natural environment. Megan spotted the convention’s bouncy kingdom of inflatable obstacles at the exhibitor floor’s northern end, so naturally Davis and I seized the opportunity—we flopped and we flipped, we dove and we slipped. Sure, we may have looked ridiculous with silly grins slapped across our face, but we came to give fucks and have fun—and we were all out of fucks. Once we got that out of our system, the group wandered aimlessly between the various vendors until the cosplay competition. There were a lot of impressive costumes showcased on stage, but the comedy act intermissions were cringe-inducing and unnecessary. The event’s end marked the departure for the SLUG squad, and so we went our separate ways for the night.

Today I saw a much brighter glimmer of hope for Salt Lake Gaming Con 2015. Attendance doubled from the first day’s and the aura of entertainment had noticeably heightened. Will Saturday improve upon today’s efforts and solidify Salt Lake Gaming Con? Or are we gamers doomed to trek the scorched lands of failure in an effort to validate our hobby? Find out tomorrow in the season finale of SLGC!

The clouds strolled across the slowly darkening sky as League of Legends cosplayers gathered outside the doors of the South Towne Expo. The atmosphere outside the venue was calm, almost too calm, since the website for Salt Lake Gaming Con announced that over 25,000 gamers would be in attendance—well, judging by the sparse looking smokers in the front, the reality of the figure began to seem pitifully optimistic.

The main hall of the Expo center is massive and the size of the grand hall made everything feel too spread out and exasperated the small numbers in attendance—which would have been around 200 at 2 p.m. (however, by the end of the day, that number went up to close to 700). On the south side of the hall, rows and rows of tables were set up for board games but were mainly used by families to eat lunch and even with those few people using them. The tables looked like cots in a makeshift Red Cross facility—a “hopeful calm before the anticipated storm” sort of thing. Just inside the doors were where the only real crowds gathered, and those were the console tournaments—they ranged from Mortal Kombat and Street Fighter to Super Smash and Doom. For a while this is where most of the energy and excitement came from. In a matter of seconds, boys became men and those men became champions (or something cliché like that).

Announcements over the speakers were loud and drowned in static like commands being shouted out by Russian officers in Stalingrad. The announcements were also awkward, and announcers took long pauses between words and during moments of iffy information. They mainly tried to direct people to events in the hall all the way on the other side of the building, and based on the stark showing at the first talk—PC vs console— they weren’t doing too well.

The conference talk was laborious and the two representing consoles were wearing all black with the PC guys in white. The moderator lagged on and on and at one point interrupted the whole talk to say that he was sorry because he wasn’t listening and was texting… The panel talked about philosophy and Toxic—a pro Canadian Halo gamer—kept trying to work Moore’s Law into every question. The only question they did not address was the most pertinent: if they truly meant to color coordinate. Some things in this world we will just never know.

The really interesting part of Gaming Con—which will hopefully be expanded upon if this convention sticks around—was the indie game section put on by the Utah Gamer’s Guild. Groups such as Fueled Rockets, Mobbl3, Squishy and Projectile were all showcasing their games—which, for being in Alpha or even pre-Alpha were very well polished. Fueled Rockets’ Crashnauts was a fun and cute shooting game that had characters ranging from armored bears to skeletons. Weapons ranged from quick shooting but short range machine guns to long range rocket launchers. Characters respawned by earth shattering space ponds—which could be aimed to take out opponents on descent.

The Cosplay characters who came out to the con were all spectacular and showed off the talent Utah has. This became evident in the cosplay competition, which was divided into categories of novice and experienced cosplayers.

Overall, the convention was a tentative success. There is a large niche for gaming here in the state, but it seems that—since the Salt Lake Comic Con / FanX combo are already biannual events—the market for this type of thing might be a little too saturated. When thinking about this convention in comparison to others, there really isn’t much to set it apart or that really takes the cake. The convention does well in highlighting local talent but falls short in really emphasizing it. However, for its low price, and for the fact that this was SLGC’s first year, hope remains for this convention to stick around in future years. The energy at the end of the day really did pick up as more people got off work, but it belonged in smaller venue. Then it truly would have felt more alive.