SLUG Mag Soundwaves
Episode #392 – Homephone
00:00 / 17:29
Spotify Stitcher
RSS Feed
Share
Link
Embed
At every single gaming convention I’ve ever gone to, I have always tried to squeeze in a game of Dungeons & Dragons, and virtually every time, I walk away disappointed. Most of the time, it’s because of an overworked Dungeon Master who runs us through an introductory adventure with zero drama, excitement or roleplaying. 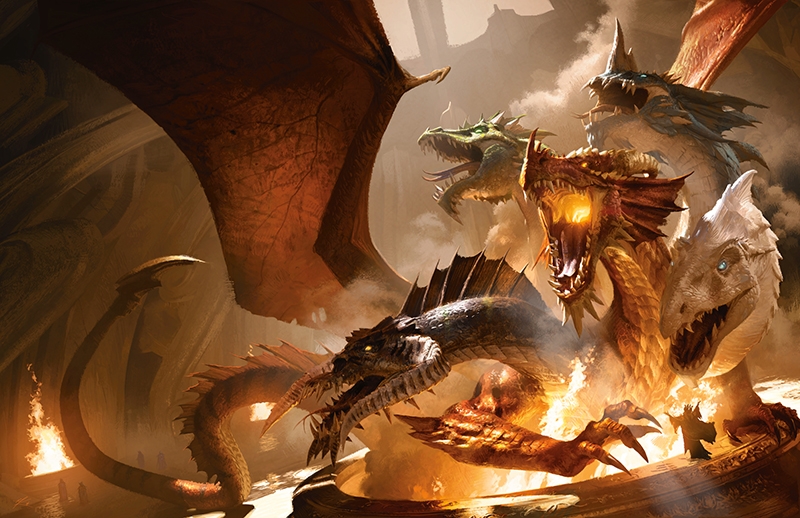 Hey, Tiamat! Have you heard about the benefits of our patented Dragon Cult Spa Therapy? Photo: © 2015 Wizards. All Rights Reserved
At every single gaming convention I’ve ever gone to, I have always tried to squeeze in a game of Dungeons & Dragons, and virtually every time, I walk away disappointed. Most of the time, it’s because of an overworked Dungeon Master who runs us through an introductory adventure with zero drama, excitement or roleplaying. I almost decided to pass on SaltCon’s schedule of D&D modules, convinced as I was of the general mediocrity I would be signing in for, but in the end, I sat down at the table, scribbled out a character and got ready to throw down. Derek Gray, the DM at our table, was all smiles, eagerly introducing the characters to one another. He gave us a brief rundown on the ruined town of Thundertree, where we were to seek out the aid of a druid who had settled in among Thundertree’s blight-infested trees and zombified denizens. From the start of the adventure, Gray spun a great yarn, matching our party blow-for-blow on roleplay and running us through the wringer when it came to combat. I’m no stranger to tough encounters, but it’s always great to encounter some serious resistance in D&D. We even had a couple of player deaths during the adventure, something I had actually never witnessed in a convention module. Despite the setback, Gray kept the party in good spirits with his great humor and good pacing, easily becoming one of the best DMs I have ever shared a table with.

That said, the most exciting part of the game was seeing our party’s crazy ideas actually bear fruit. We smoked out a group of dragon cultists, slew a veritable horde’s worth of zombies and even encountered a young green dragon—the kind of encounter that can easily spell “total party kill” for a group of first-level adventurers. While I attempted to bargain with the beast, a couple of the newer players decided to rush him, earning themselves a swift trip to death’s door. Luckily, the party Cleric and I kept the conversation going, convincing the dragon that we were initiates in some kind of weird dragon spa cult, and that our now-unconscious friends were offerings of food for his pleasure. He turned out to be as gullible as we had hoped, leaving on a journey to find the mythical dragon spa he so desired. After a moment of silence, we all laughed heartily, only to realize that we didn’t want to be around when the dragon discovered our deception. We gathered up his modest hoard, scooped up our friends and beat our way out of town, hoping that we would only encounter the dragon again when we were strong enough to defeat it. Among the gold and jewels, my character found a magical greataxe named Hew, a pretty cool reward for the journey.

I stood up from the table feeling refreshed and with a few solid tips on how to run my own adventures. One of the new players, a younger kid, immediately turned to his dad and told him that he wanted to buy some 5th Edition books. His dad’s nodding reply filled me with hope for a new generation of D&D players. I looked over to Gray, who couldn’t suppress a smile. That’s the way convention D&D is supposed to be—friendly, fun and full of adventure.