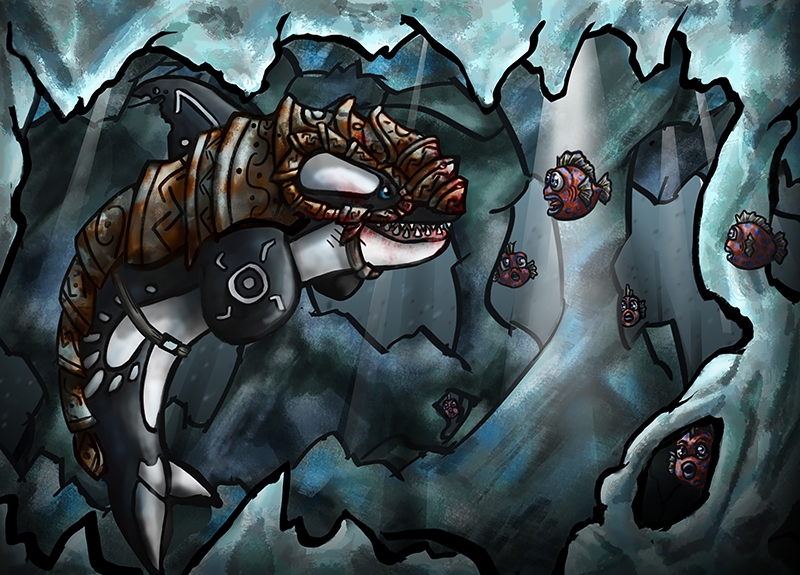 Life ain’t easy when you’re facing down an armored orca whale, but Eye of the Swarm lets you and your fishy friends take them down. Photo: Eye of the Swarm
At the far end of the exhibit hall, a couple of student teams from the University of Utah’s EAE program had set up game demos. The first one I sat down at was called Eye of the Swarm. This game is still in the Alpha build, but its central mechanic is pretty intriguing. You play a swarm of tiny creatures that attempt to take out bosses and baddies that are many times your size, but what you lack in size, you can make up in sheer numbers. In the demo, I played a school of brightly-colored fish who were trying to take down an enormous lava turtle. At first, my swarmlings kept flinging themselves around the map, trying to track down the boss’ weak point. Once I found it, my noble fishies sacrificed themselves heroically to pelt the exposed area, taking a decent chunk of the turtle’s life away. That seemed to only anger the fiery beast, and he whipped out a whole new attack pattern involving erupting undersea volcanoes to cow my swarm into a corner while he came barreling in with his flaming shell. I almost slew him, but he trapped my entire swarm in a flaming matrix, forcing me to watch helplessly as the rest of my beautiful fish minions were fried alive. The game was pretty fun, and the team expressed that their biggest goal from this point forward is to polish the game and get it ready for Beta testing. I wish them luck.
The second game on display was Melter Man, a strange sort of platformer that cast you in the role of an average white guy with a high-powered vacuum cleaner. Your mission: Destroy a toy factory that is controlled by evil toys. You had to melt polymer, suck it up with your vacuum and spit it back out to create platforms that would help you through the level. You could also suck up lava and shoot it out for an especially toy-melting blast. The catch is that if you overheat your vacuum, you end up exploding. All told, the game’s mechanic was fun and robust, and while the levels were clearly tutorial-oriented, you could tell that a lot of work went into making the approach to each section pretty unique.

All said, the EAE program at the U of U is producing talented teams, and their stories about attending San Francisco’s Game Developer’s Con were pretty extraordinary. It’s nice to see our humble state beginning to make its mark on the national video game development scene.