00:00 / 15:25
Spotify Stitcher
RSS Feed
Share
Link
Embed
Cheatin’ is a bit bizarre, but entertaining nonetheless. It’s an animated narrative film that tells the troubled love story of Ella and Jake, which has no dialogue, just grunts and squeals from the animated characters. 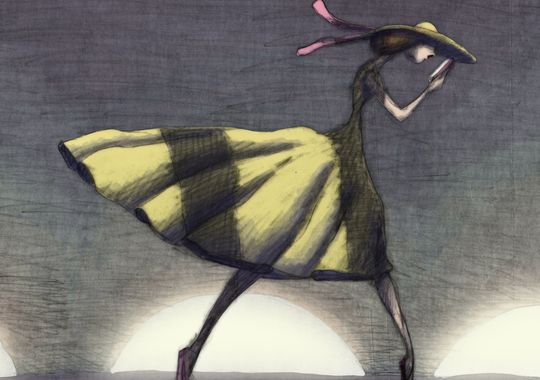 Cheatin’ is a bit bizarre, but entertaining nonetheless. It’s an animated narrative film that tells the troubled love story of Ella and Jake, which has no dialogue, just grunts and squeals from the animated characters. The two meet at the fair while Jake is on a date with some other broad. As Ella gets crashed into too many times in the bumper car rink, she suffers a crash and almost dies from electrocution. Luckily, Jake is there to save her, and the two are love struck with each other (WARNING: There’s a lot of softcore cartoon sex in this movie). Things seem to be going swimmingly, but Jake is just too much of a hunk—he has women throwing themselves (and their clothes) at him left and right. One especially sadistic, redheaded woman leads Ella into a changing room full of male mannequins while she tries on clothes, and snaps a photo of her to make it seem like she was getting a bukkake sesh. The conniving woman drops by the gas station at which Jake works, flirts with him (to the chagrin of her meathead husband), and slips him the photo, which sends him into tears and a mania to get back at Ella … by having sex with everyone woman with a vagina. Once Ella discovers a number in his work shirt, she, too, is bent on revenge. She first tries to put a hit on Jake with the sadistic redhead’s husband, but when that falls through, she meets a magician of sorts, who can transfer her into other women’s body’s and spoil Jake’s cheating exploits. Will the two come to terms and understand root of all these unfortunate mistakes? Cheatin’ is great for one run though, though it isn’t especially riveting. The animation is a great blend of colored-pencil-looking techniques reminiscent of the backdrops of Hey Arnold! (except the characters are animated that way, too), and the characters’ bodies get comedically blown out of proportion to add a dash of cartoonish flair. These animation aspects keep the movie’s engine running, but it feels too long and would have been more efficient as a short.