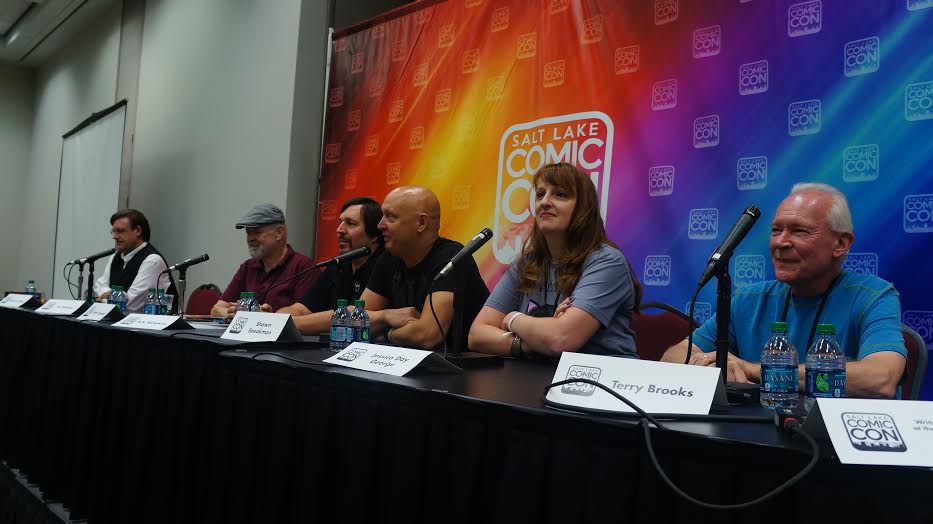 As I mentioned in my previous article, Salt Lake Comic Con is practically a miniature Fiction-Writing 101 course, with various instructors in a whole slew of genres who eagerly impart hard-won lessons onto the aspiring writers among us. Even after the second day of this three-day event, it's hard not to feel a little inspired by the sheer amount of encouragement coming from some of the industry's top writers. Instead of writing up my outline for an ambitious new novel, though, I'll bring you the six best writing tips I've gleaned over the course of this year's Salt Lake Comic Con.

No, this isn't an excuse to jump on Wikipedia and get lost in the endless information sea. Research means far more than just reading up on a topic, although reading certainly helps. Just as Julie Wright explained on Thursday, sometimes the best research goes on when you're seeking out new experiences in the world around you. Aaron Lee Yeager put it best: “Be fascinated by the world.” Don't look to writing for an excuse to hide out in a dark corner and expect to write masterpieces.

By that same token, sometimes an extended Wikipedia search or an excellent book on a fascinating subject can reignite some of the passion a writer has lost in the course of writing their novel. However, remember the reason you're researching. If you lose sight of that, research simply becomes a distraction from writing.

Sorry, pantsers of the world, but “winging it” just doesn't work for most of us. Professional writers tend to plot out their trajectory with a story, whether it's just in a loose three-act structure or a strict, multi-page outline that functions more as a rough first draft to build from. Though the panel on Outline vs. Discovery writing went a little more in detail on this subject, as I listened to more and more writers touch on their process, I kept hearing more and more writing tips about the outlining phase and what it means to each writer.

In the Writing Action panel on Friday, Larry Correia explained that he often uses an outline to plot out an action sequence in order to keep himself from getting bogged down in the details. Such an outline keeps the details relevant to the resolution of the action, giving each beat of the writing a sense of movement toward a resolution.

Even Jim Butcher admitted that his initial resistance to outlining came from a fear that doing so would make his story cliché and formulaic. His first attempt at writing an outline came from a desire to prove one of his writing instructors wrong, but blossomed into a full embrace of the practice.

Don't despair, discovery writers. There's ample space for discovery in the blank gaps of an outline room to explore and discover your world. Writing tips like these are meant to give structure and meaning to writing, rather than restrict it with arbitrary rules and boundaries.

This piece of advice, similarly, came together from various writing tips from a variety of different authors, all of whom counseled against the urge to spew out details on the page. Butcher cited an interesting principle—the “Iceberg Principle”—which essentially means that you should only ever show about 10 percent of what you know about the world to a reader, as they will gladly fill in the details themselves. “Use white space,” he said, indicating that the act of writing a novel should allow the reader to use their imagination, rather than yoking their internal eye to your plot.

The renowned Terry Brooks said that it is best, when one is writing, to seek to remove the author as much as possible from the work. This allows the reader to build the world in their own minds, and makes for a far more compelling world.

When you think about it, it makes a lot of sense—no single mind can create a world that appeals to millions of readers. But, if each reader is allowed to put a little of themselves into that world, that appeal is inherent to the work. Give readers just enough of the world to discover the rest for themselves.

Some of these writing tips felt fairly basic, but this one really threw me. Yet, as I continued thinking about it, it made more and more sense. Many writers see action as somehow inherent to their stories. It's a natural impulse—many of us are drawn to the craft as much by film, video games and other media as we are by the books that inspire us. Thus influenced, we often see violence and action as somehow inevitable, and many of our characters can develop that tendency as well.

Frank Martin brought up an excellent point that underscored this point in the panel on Writing Action. “Action needs to have consequences,” he said, pointing out that violence affects both the victim and the enactor of the violence. This simple principle matters quite a bit when one considers the relationship between a character and their use of violence. Even the most jaded, battle-worn soldier has a perspective on their acts, whether it be a distant disgust or a sense of grim familiarity.

Correia backed up this statement by explaining that, at previous jobs, he's worked with plenty of kick-in-the-door types who viewed violence as a source of humor or amusement. Meanwhile, Charles E. Gannon mentions a particular individual whose reaction to violence was particularly chilling. The person had a clearly violent job as an agent of an unspecified Intelligence organization, and when asked why he liked to do his job, he simply paused for a second. Then he said, “'Cause I like to help people, heh.”

Many more examples came forth in the Writing Action panel, which was full of useful writing tips. It was arguably one of the most interesting and thought-provoking panels of the entire con. It would have been easy for the panelists to merely explain their enthusiasm for explosions, guns and weapons, but instead the panel became a meditation on the role of violence, and the importance of establishing one's characters and their relationship with it.

2. Every Character is the Hero of their Own Story

It's easy to forget that the secondary characters of one's novels have a deep and rich psychology—hopes, dreams, fears, drives—when authors already spend so much time fleshing out their main characters. Yet, it's an inescapable fact that often eludes newcomers to the world of writing fiction.

It seems almost like an obvious statement, but everyone—no matter how selfless or arrogant—sees themselves as the hero of their own life story. Understanding their drives and motivations can help even the smallest characters jump off the page. “Everyone wants to be loved,” said Kevin Hearne, a panelist on the Character Development panel. “Characters are defined by how they pursue that desire.”

Brian McClellan, also on this panel, breaks down the basics of understanding a character into three questions: “What defines them the most? What drives them? What are they running from?” These questions matter because they get to the heart of a character's inner world. Instead of only seeing how they react to external factors, it's important to establish a character already in motion, capturing them in the midst of their self-directed adventure.

Jessica Day George brought up an excellent tactic for writing strong characters. She likes to come up with a conflict first, and then run characters through various resolutions to the conflict until a character discovers a solution that is truly interesting and fights their way through the conflict. At that point, the character is already half-made, allowing her to continue writing from their perspective already knowing how they respond to the difficulties posed by their lives and aspirations.

1. There Are No Bad Ideas

This writing tip is particularly paralyzing for a lot of aspiring authors. We are an anxious bunch, prone to self-criticism and self-doubt. One of the greatest sources of anxiety for most writers who don't get much done is that, simply, their ideas aren't any good. This self-intimidation tends to step in the way of our writing, often taking the form of the dreaded, mythical “writer's block” that afflicts so many of our kind.

Brooks, whose Shannara series has reached its own legendary status in the pantheon of fantasy writing, said flat-out that there are no bad ideas when she gave her own writing tips. Ideas are good if they are executed well—that's all. It was such a short utterance, but it was a powerful one, especially coming from a paragon of the genre. Ultimately, he said that, instead of worrying about whether an idea is derivative or cliché, it's important to write those ideas out and give them a chance to play themselves out.

Most often, we associate cliché ideas with poor writing. “Cliché writing is just an archetype being executed badly,” said Butcher. In contrast, good writing embraces influences from previous works while also seeking to improve upon them and add a unique take or twist on the formula. Voice, too, is integral to distinguishing one's writing as distinct from their forebears in the genre.

However, that feeling of paralysis that comes with the fear of being outed as generic or boring comes from a place of deep self-analysis. We all put a critical eye to the media we love, and it's understandable that, in the course of exposing ourselves to more and better writing, our standards for our own writing increase. Those of us who were unfortunate enough to study such subjects in school also know the crushing weight that expert advice can exert on one's creativity.

Peter Orullian, however, helped to loosen even those tightly-clutched chains. “Learn everything you can about writing, and then put it from your mind when you start writing,” he said. “You have to trust that, subconsciously, you have internalized these lessons about writing.” Editing, after all, brings out the beauty of any creative medium, but only after the rough edges of a first draft are exposed.

Go Forth and Write

These writing tips and more made Salt Lake Comic Con 2015 a practically indispensable resource for the many aspiring authors in the state. Only time will tell how many among us will eventually start chipping away at our own stories, spurred on by the authors we admire. If you have any writing tips of your own, share them in the comments!