The Road to Fallujah – Review

Director Manning dives deep into the maelstrom of controversy over one of the most famous of the Iraq War’s battles in his informative documentary, the Road to Fallujah. Manning, a former underwater construction worker on off shore oil rigs, states at the beginning of the doc that he couldn’t support the war via his job, so he quit, picked up a camera and went traveling the world looking for a solution. Manning snuck into Fallujah, unembedded, to catch what the mainstream press wasn’t picking up.

The doc shows footage I’ve never seen from the war before: severed limbs of children, people with half of their head blown off, and thousands of broken homes. As the documentary rightly portrays, humanizing the Iraqi populace would be a mistake the war machine would not enjoy. Certain footage was not shown to the US populace during the siege of Fallujah and it gets full coverage in this film. Perhaps the most tragic of the footage shows the inside of the general hospital in Fallujah: broken glass and equipment littering the floor in a mockery of good medicine. An Iraqi interviewed in the hospital said that even the lightly wounded brought for help would die after a time. The supplies and staff were simply not there.

Manning took his quest beyond just Iraq and uses effective graphics and quotes to show the failings of the past administration in it’s dealings with Fallujah, and the war in general. It is an effective piece and one I highly recommend: the best doc of Slamdance so far. And it was all made by an average guy with a conscience who took a night class in documentary film and let his soul guide him.

No more screenings are available for this film. 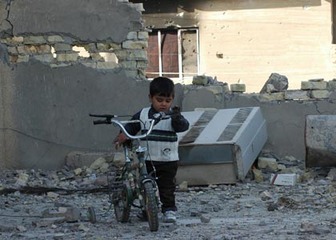