00:00 / 15:25
Spotify Stitcher
RSS Feed
Share
Link
Embed
Nowhere else will you see local legends like Dr. John and Preservation Hall Jazz Band perform on the same stages as worldwide phenomena such as The Cure, Nine Inch Nails and Pearl Jam, all the while catering to a younger culture of music lovers with headliners like Bassnectar, Macklemore & Ryan Lewis, Calvin Harris and Paramore at the Voodoo Music Festival in New Orleans.

The Voodoo Music and Arts Experience 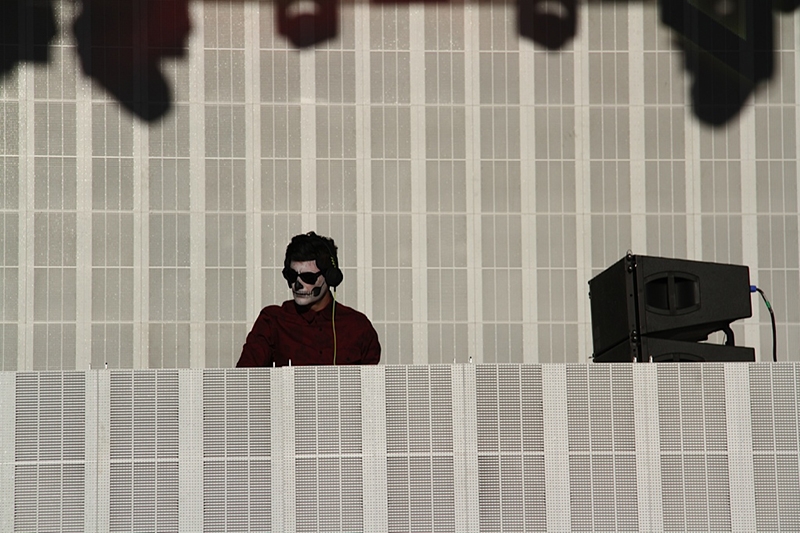 There’s something about music festivals in the south that seem to represent the widest variety of talent the industry has to offer (just take a look at events such as Austin City Limits, SXSW or Bonnaroo). Nowhere else will you see local legends like Dr. John and Preservation Hall Jazz Band perform on the same stages as worldwide phenomena such as The Cure, Nine Inch Nails and Pearl Jam, all the while catering to a younger culture of music lovers with headliners like Bassnectar, Macklemore & Ryan Lewis, Calvin Harris and Paramore. In addition to the lineup, Voodoo Music and Arts Experience brings in a wide range of up-and-coming talent that takes you around the world musically and lands you smack dab in the heart of one of the biggest cultural melting pots in America⎯New Orleans. With a lineup like that, it’s hard to see everything, but I managed to check out a majority of the newer names and still enjoy some of my bucket list arts. Here’s a list of some artists to watch for as well as recaps of the headlining performances.

Artists To Watch For:

Anamanaguchi: “What the fuck is an Anamanaguchi?” I thought to myself as the band of four members took their positions on the Carnival stage, which they had set up with a set of large, glowing poles circling their instruments and two small, clear glowing boxes set off to the side that showed holographic pictures throughout their set ⎯it was simple yet aesthetically pleasing. They classify their music as “Chiptune,” an up-tempo electronic beat using real instruments and sped-up vocals that made them sound similar to a punk band on crack⎯but in the best possible way. Their sugar-and-spice video game style sound set them apart from anything else I had seen so far that day and made them particularly memorable. “We’ve been up since 10 am yesterday,” the lead singer announced to the crowd in between songs, having come straight from DJ-ing a Halloween party in New York City just the night before. They’re dedicated. They’re fun. They’re neon. They’re kawaii. I’m still not exactly sure what an Anamanaguchi is, but I’d be down to find out.

Destructo: This LA-based DJ took the stage in full zombie makeup and a button-up top, obviously still celebrating Halloween. His hour-long set consisted mostly of his original music (from what I heard, I had to pop in and out) and stayed within the same style. Despite the fact that he was from LA, his sound was very similar to that of European electro house icons such as Hardwell and Tiestö, but also had a bit of a deep house side to it, another genre original to Europe with slower beats and heavy bass. His early time slot didn’t stop him from turning up and attracting a buzzing mob of ravers decked out in neon fur and tutus. His stage energy was good and he would go back and forth from the booth to the front of the stage to interact with his audience, never missing a beat. Walking across the park, you could feel and hear the echo of his music vibrating through the air and the sound of the crowd getting more and more excited. I wouldn’t pass up the opportunity to see Destructo again and wouldn’t be surprised to see him blow up in the near future.

ZZ Ward: Oregon native ZZ Ward was obviously born with a Louisiana soul as she took the stage early in the day and belted out iconic jazz and blues solos from the Le Flambeaux stage. There’s really something to be said about the quality of her voice when translated into a live setting—the tiny blonde didn’t miss a note and danced around playing the harmonica with a sort of fire in her step that showed she belongs onstage. However, she still allowed her band to shine by introducing them and adding solos for each instrument. She played some music from her older albums as well as a song she had just recently written called “Little Darlin’.” I’m not the biggest jazz and blues fan, but ZZ Ward may have easily converted me.

Boys Noize: When it comes to electronic dance music, no one does it quite like Europe. For Berlin born Boys Noize, that hard, grimy, electro house sound native to Germany came naturally. His hour-long all original set featured up-tempo heavy bass that roared through the festival grounds just as fellow performer Destructo did just minutes before. For fans of high energy EDM shows, you’ll not want to miss this one. With synth textures similar to Zedd, Boys Noize prepared the crowd well for that night’s headliner, Calvin Harris. However, with a name like Boys Noize, I was expecting more of a hip-hop and rap influence in his set. Maybe I’m just a little too judgmental of DJ names, but this one isn’t the best.

The Virginmarys: English punk rock is captured perfectly in the three-person band The Virginmarys. In preparation for their UK tour, the band made an appearance at this year’s Voodoo Fest main stage that would later be shared with Macklemore & Ryan Lewis as well as the iconic American rock band Pearl Jam. The band played songs from their debut album King of Conflict (Cooking Vinyl/Wind Up Records) that was recently nominated for Best New Album in this year’s Classic Rock Awards. Edgy and hard are the only words I can use to describe the band’s sound with raging vocals and ear splitting (in a good way) guitar solos in songs that were focused on things like heartbreak and past relationships. The lead singer had sort of a Jack White meets Billy Joe Armstrong look that said, “I’m a rockstar,” and left it at that. The band will be touring the East Coast and Midwest areas next spring and will hopefully make it to the West Coast in the near future.

Matt & Kim: “Let me introduce you to my partner in crime slash my partner in sex, Kim!” Matt Johnson screams to the masses at the Ritual main stage Sunday afternoon as a leopard print clad Kim bends over on top of a bass drum and waves her butt to the crowd. The Brooklyn-based duo delivers one of the best novelty performances I’ve seen to date and easily one of the best performances I’ve seen all weekend. “I need to see that New Orleans bounce, I know ya’ll invented that motherfucking bounce,” Matt screams into the microphone before dropping a live remix of the hit Jay-Z and Kanye West single “Niggas In Paris.” The energy and excitement provided by drummer Kim Schifino was like a drug dosing the crowd with happiness, as she had a permanent Triangle Sally smile pasted to her face during her drum solos. The duo played a handful of songs from their albums and DJ-ed some popular dance and hip-hop singles in between before finishing their set strong as members of the crowd threw their underwear onto the stage. You’d probably recognize their hit single “Daylight” or maybe some of their other viral music videos and can find out more about them on their website.