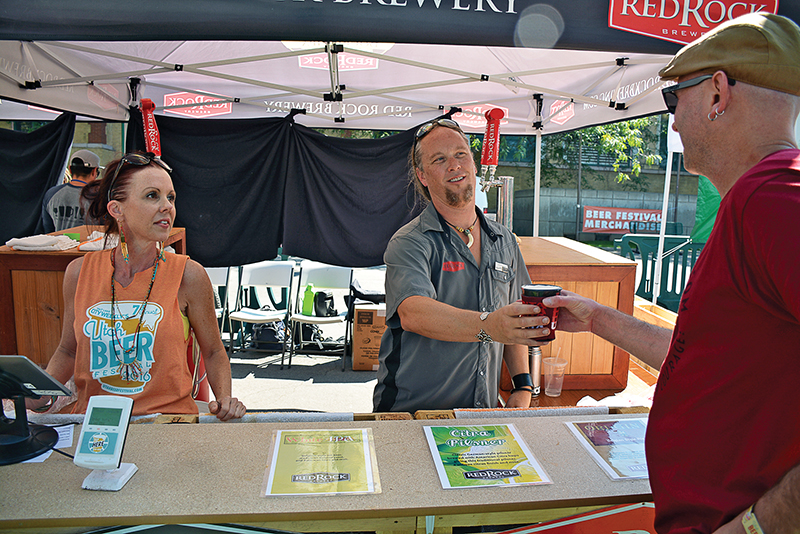 The Utah Beer Festival: Curing Your Ale-Ments Since 2009

Two years ago, SLUG gave me my first test assignment: Review the Utah Beer Festival (UBF). Ever since then, I’ve been hooked, waiting for August to roll around so I have the chance to listen to kickass local blues and folk music, try 100-plus samples of delicious, cold beer and soak up the sun while mingling with friends. The annual UBF is a local gem and continues to grow in size and scale. The 8th Annual Utah Beer Festival will take place this year at the Utah State Fairpark on Saturday, Aug. 19. Jackie Briggs, Marketing and Events Director for Salt Lake City Weekly, Devour Utah and the UBF, shares the tips, tricks and insights for this year’s festival.

Years ago, the Brewers Association hosted beer festivals, but many times, the events fell through. Briggs and her coworkers at City Weekly recognized the difficulty in hosting a beer festival while you were a brewer yourself. They needed a third party, and City Weekly were the right people to organize it. “We thought this would be a great opportunity to host a festival because we had so much great beer—great local beer,” says Briggs. “We were so excited to see them winning awards at the Great American Beer Festival and in San Diego. We thought that we should be highlighting them ourselves, here in Utah.” The UBF’s first year was held at the City and County Building to instant success. “We had 1,000 more people show up than expected,” says Briggs. “We knew we needed more tents to accommodate all the beer drinkers.” And accommodate they did. Last year’s event alone accumulated over 60 breweries and cideries, including regional and national. This year, Briggs estimates that the number will push 70. Local breweries and cideries (which make up nearly 40 percent of the festival) are truly at the heart of the UBF. “There are small breweries that come out that aren’t a part of a big organization,” says Briggs. “It’s really special to have them there, because you don’t have access to their beer very easily unless you visit their brewery or live in that particular area.”

Along with local beer and cider is the benefit of listening to local music. Some of my past favorites have included seeing Folk Hogan and Candy’s River House because nothing blends together better than the blues, good folk music and a cold beer. “All of our stage holds local bands, and we try to rotate the opportunity as much as possible,” says Briggs. Any local band is welcome to apply online each year for their chance to play at UBF. If you want to grab the mic without needing to apply online, bring your friends to karaoke at the festival. For those who are looking for more active entertainment, UBF has partnered with the Beehive Sport & Social Club, an outdoor, adult rec league, who will bring games such as beer pong and squirt-gun fights. And, last but not least, is the charity component of the UBF. “For the last few years, we’ve worked with the Humane Society of Utah,” says Briggs. “They bring 25 adoptable pets each year, and they all get adopted. Not only do they raise money, but their animals are actually finding permanent homes.” Live music, puppies and endless amounts of beer—what more could you need?

One major success for the UBF is that they’ve been breaking down the stereotype that Utah and alcohol don’t mix. “The first few years, it was difficult to get regional and national breweries here because those brewers thought, ‘It’s Utah. We don’t want to come from out of state to go to a beer festival in Utah,’” says Briggs, “but Utah is not the culture that so many people think it is. We worked past that threshold, and now we do have regional brewers who reach out to us. We’re building that mindset and growing the momentum.” And if you are going to the festival for the first time this year, you’ll probably notice how kind and supportive the local beer community is. “I give credit to the brewers here in Utah,” says Briggs. “It’s the atmosphere they’ve created. People know each other and treat one another with respect.”

Briggs also has some tips for the festival, but they mostly revolve around three things: food, shade and water. “Keep the balance between those three,” she says. “You have to pace yourself.” The festival allows attendees to bring items such as umbrellas, blankets, shade tents, water bottles that can be opened and refilled, and snacks—bring your snacks! But if you forget, don’t fear: The UBF always has 10 to 15 local food vendors available all day. And if you want to try the most beer, stick with the smaller-sized cup. “Otherwise, you’re going to max yourself out at four or five beers,” she says. “Plan accordingly. Bring things that make you feel comfortable so you can make a day of it.” If you really want to make the best of your time, go for the VIP ticket. It’s $50 and includes access to the VIP lounge, eight exclusive beers with food pairings, the Humane Society’s silent auction, a Q&A with the brewers and more!

Tickets will be available soon at utahbeerfestival.com. You can also follow their updates on Facebook at facebook.com/UtahBeerFestival. Don’t miss this year’s annual Utah Beer Festival on Saturday, Aug. 19 at the Utah State Fairpark.