00:00 / 16:39
Spotify Stitcher
RSS Feed
Share
Link
Embed
For the past 17 years, Paul Rachman has made the trek to Park City every January to be a part of what he describes as the film festival “circus” that overtakes the small mountain town. Rachman helped found Slamdance Film Festival in the mid-’90s and currently serves as the Festival’s east coast director.  “[It’s] important to me because there is a tight community of people helping each other,” he says. 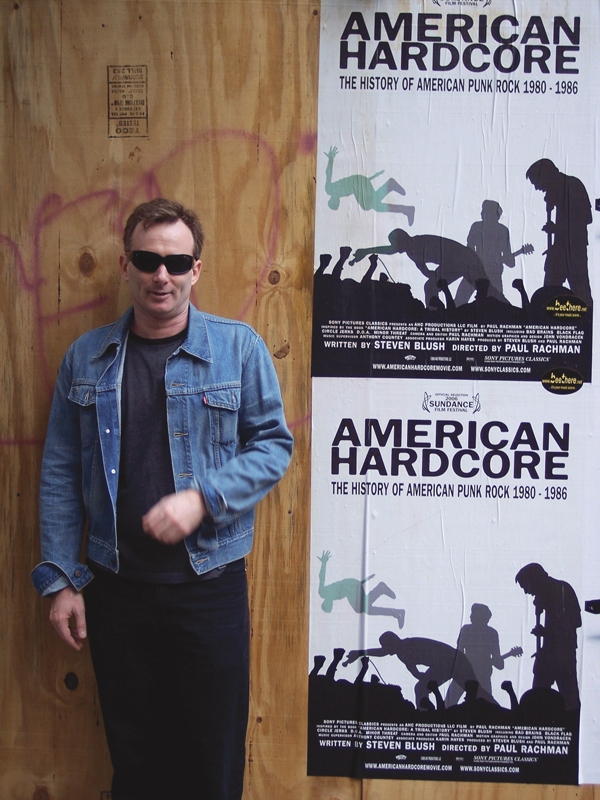 For the past 17 years, Paul Rachman has made the trek to Park City every January to be a part of what he describes as the film festival “circus” that overtakes the small mountain town. His ties to the film festival community run deep, so it’s no surprise that he makes the annual journey. Rachman helped found Slamdance Film Festival in the mid-’90s and currently serves as the Festival’s east coast director—he met his future wife, Karin Hayes, at Slamdance in 2003 during a premiere of her film, The Kidnapping of Ingrid Betancourt and most recently, in 2006, premiered his documentary film, American Hardcore, at Sundance Film Festival.  “[It’s] important to me because there is a tight community of people helping each other,” he says.

Unfortunately, Rachman’s most recent project, a music documentary titled Lost Rockers, won’t be making a premiere at Sundance, but for Rachman the Sundance rejection isn’t the end of the world. He’ll have plenty to keep him busy—serving as a producer for his wife’s documentary film, We’re Not Broke, which will premier at Sundance and as the executive producer for a Slamdance film called Buffalo Girls. “Lost Rockers had so much more work to go into it to even present it as a premiere at Sundance, the fact that it’s not [premiering] is such a relief. The next six weeks would have been really difficult. Now I can put my energy in helping to finish my wife’s film—which is going to be incredible,” he says.

Rachman got his start with filmmaking in the same scene that was documented in his 2006 film with Steven Blush, American Hardcore. Rachman purchased a Super 8 camera in the early ’80s as a way to document the birth of the Boston hardcore scene. Eventually, the footage that he shot of bands like Gang Green and Bad Brains became videos that aired on MTV. The exposure of those music videos got him a contract with Propaganda Films in LA in 1988, where he began creating music videos for Joan Jett, Pantera and Mighty Mighty Bosstones. “I was the young director, doing all the alternative stuff. The experience of that environment was really powerful. Propaganda Films practically single handedly changed music video into another phase of the creative process,” he says.

Although, Rachman says that it’s difficult to pinpoint exactly how his ten years of music video making influenced his documentary films, the experience has given him an understanding of numerous music genres and confidence. “You learn so much technically, you’re sometimes shooting three videos in a week and you have four of them in post production. You’re just churning the stuff out and you are learning from mistakes, and you’re learning about new technology and you’re taking risks,” he says. If one thing has stayed constant, it’s that Rachman still juggles multiple projects at once.

Finishing up Lost Rockers, the current feature length documentary that he is working on with Steven Blush, will be next on his list. He says it needs another six-to-eight weeks of work before he will begin submitting to festivals like SXSW and Tribeca. “Sundance is the launch of everything, so you really try to be part of that,” Rachman says. “The last film got in, this one won’t, the next one might. It’s that kind of bumpy road in filmmaking. There are already distributors that want to see it. It will find its place.”

The film tells the story of eight musicians who Rachman says, “were on the cusp of super stardom and then fell through the cracks.” There is Jake Holmes who wrote the song “Dazed and Confused,” which was made popular by Led Zeppelin, but he never saw a dime for it. There is Gloria Jones, the soul singer who recorded “Tainted Love,” who fell in love with Marc Bolan of T. Rex and moved to England to be with him. “She should have had Tina Turner’s career. She was way more talented—a  producer, a writer, a performer. She happened to be driving the car the night of the accident that [Bolan] died in and her career never recovered,” says Rachman. It also features Chris Robison, who Rachman says wrote, recorded and released some of the first gay rock records, but major labels found the music too seedy and so the songs sunk into oblivion. Bobby Jameson, David Peel, The Lightning Raiders and Cherry Vanilla are also covered. “It’s a very different type of rock documentary. Music documentaries are usually about the stars, the big scenes, the big albums. This is about people who didn’t make it, but were awesome,” says Rachman.

The film covers a variety of genres and artists from many eras, but Rachman says they are tied together because they show the “human side” of being an artist. “I think these stories are so inspirational because they are much closer to what the average person [experiences,”] he says. “There are so many people who are always on the cusp of making it and these stories show people what it is like. And none of them ever gave up music. None of them took another job. None of them ever changed their careers.”

Although Rachman realizes that if he wanted to, he could likely play some of the film during Slamdance, but it isn’t something he is willing to do. “Being one of the people that helped start [Slamdance] I’ve never felt comfortable playing my own films at my own festival,” he says. “I’m not a first-time filmmaker—Slamdance is really a discovery festival and I’m not going to take the place of a filmmaker who [has] the dream to play at Slamdance.”

His decision is honorable, especially when you consider how many filmmakers and films get discovered because of Slamdance. Oren Peli’s Paranormal Activity premiered at Slamdance in 2008, Napoleon Dynamite director Jared Hess was discovered at Slamdance and Rachman’s wife got her start there, too. Rachman says that every year, there are somewhere between a dozen to 20 Slamdance alums with films premiering at the larger Sundance Film Festival. Although Slamdance was “born out of rejection” from Sundance, Rachman insists that the relationship isn’t a tumultuous one. “[Slamdance] exists out of love for Sundance, it’s not out of hate for Sundance. We wouldn’t have wanted to be [in Park City] so bad if we didn’t want to be part of [what] goes on there,” he says.

In addition to Lost Rockers, Rachman is working on an ongoing short series of films documenting the life of the deceased actress, writer, heroin addict and friend of Rachman, Zoë Lund. Rachman met Lund through her husband, Robert Lund, who was a video engineer. Although Rachman only knew Zoë for approximately three years, he says that she was fascinating. “[Zoë] was everything that 1980s NYC downtown was all about, a New York diva in a sense,” says Rachman.

Rachman discovered that Zoë had passed away when he moved back to New York City from LA and decided to make a short film of Robert talking about his short life with her. Rachman was impressed by how many things Robert revealed about her and decided that he wanted to talk to other people. “She had so many different relationships with people that I think it’s going to be a really interesting project to keep doing these five to ten minute short films with different people who were a part of her life,” says Rachman. “At the end of that, I think I’ll have this hour and half full story, but it’s through so many different prisms. It’s a bit of an experimental project, but as a filmmaker that’s such a great path to be on. Every year or so I’ll make one and I’ll find out something new. I’ll see how it pieces together.”

Rachman suspects that project will probably take six to seven years to complete, but sees it as something that doesn’t need to be rushed. “If I was a painter, I would probably have 20 paintings in progress in my studio,” says Rachman. “That’s the beauty of it. Having the Zoë Lund project as a side project that is constantly evolving is my way of having that painting on the side that I can always go work on.” Rachman recently finished the second short film in the series, which features an interview with Lund’s mother. No promises were made, but Rachman did hint that he might be willing to showcase this shorter film during Slamdance. “I don’t want to overexpose them too much while I’m making them, but I do want people to be aware of them and follow the series,” Rachman stated.

To keep tabs on what Rachman has in store visit his website paulrachman.com and check out Slamdance film Buffalo Girls and his wife Karin Hayes’ film We’re Not Broke at Sundance.